Outsiders in the Land of Their Birth: Exogamy, Citizenship, and Identity in War and Peace 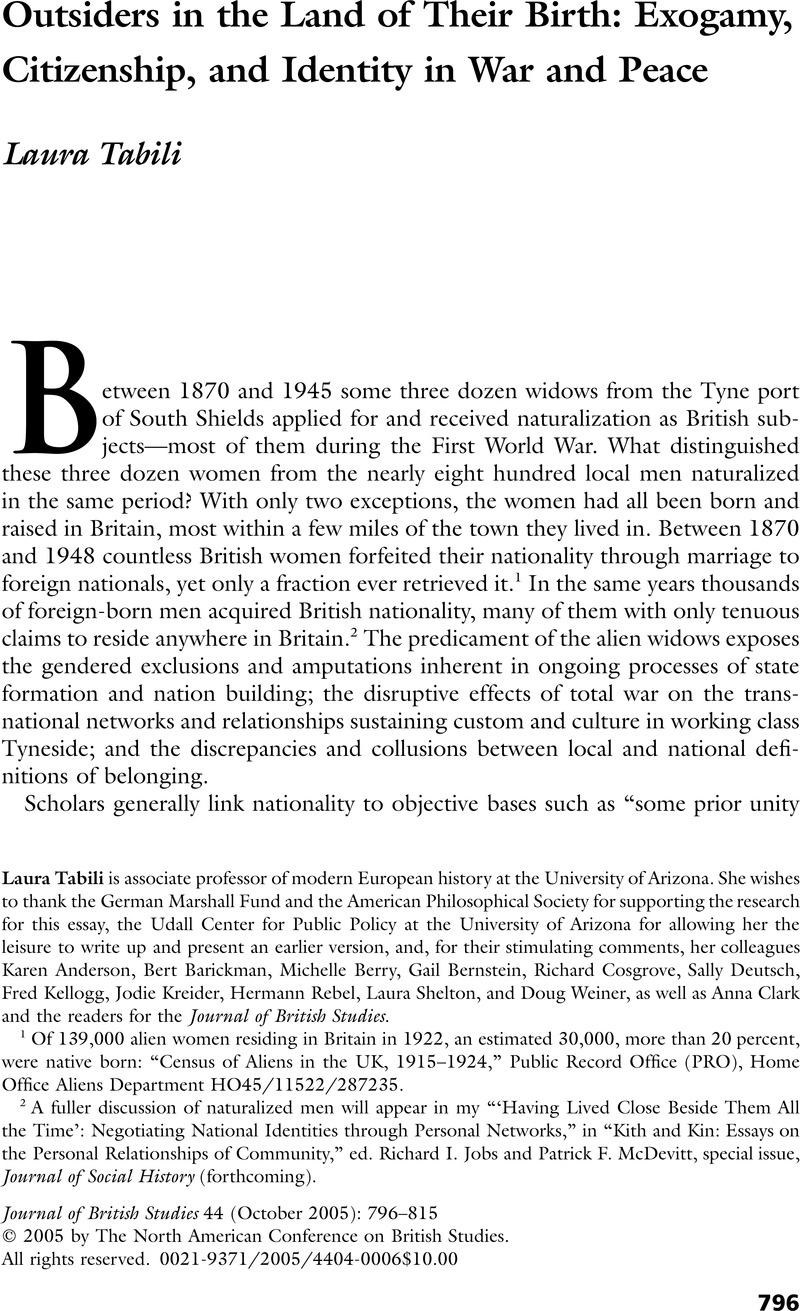 2 A fuller discussion of naturalized men will appear in my “‘Having Lived Close Beside Them All the Time’: Negotiating National Identities through Personal Networks,” in “Kith and Kin: Essays on the Personal Relationships of Community,” ed. Richard I. Jobs and Patrick F. McDevitt, special issue, Journal of Social History (forthcoming).

3 Eley, Geoff and Suny, Grigor, “Introduction: From the Moment of Social History to the Work of Cultural Representation,” in Becoming National: A Reader (Oxford, 1996), 4–9, 11; Cesarini, David and Fulbrook, Mary, eds., Citizenship, Nationality and Migration in Europe (London, 1996), 1.

7 Hansen, Citizenship and Immigration, 39. M. Paige Baldwin has shown that concerns about the complexity and ambiguity of descent and nationality in British colonies constrained lawmakers from strict application of jus sanguinis in “Subject to Empire: Married Women and the British Nationality and Status of Aliens Act,” Journal of British Studies 40 (October 2000): 522–56.

8 In practice, definitions of nationality “oscillated uncertainly between a statist and an ethnocultural pole,” informed by a “diffuse set of habits of thought and feeling.” Brubaker, Citizenship and Nationhood, 117. Also see Randall Hansen, Citizenship and Immigration, 195; Cesarini and Fulbrook, Citizenship, Nationality and Migration, 5.

9 Caron, Vicki, “The Task of Becoming Citizens,” in Between France and Germany: The Jews of Alsace-Lorraine, 1871–1918 (Stanford, CA, 1988), 1–26; Marion Kaplan shows Jewish women's agency and their stake in constructing a “Jew-friendly” version of German cultural identity that was bourgeois, cosmopolitan, and inclusive, while simultaneously documenting the everyday forms of violence that “top-down” interpretations elide, such as the Putznarrinnen (cleaning-madwomen) who “scrubbed and polished away their Jewishness” or the sacrifice of Eastern European and working-class Jews, in The Making of the Jewish Middle Class: Women, Family, and Identity in Imperial Germany (Oxford, 1991).

13 Eley and Suny, “From the Moment of Social History,” 26; see also Klug, Francesca, “‘Oh, to be in England’: The British Case Study,” in Woman-Nation-State, ed. Yuval-Davis, Nira and Anthius, Floya (London, 1989), 16; Vogel, Ursula, “Is Citizenship Gender-Specific?” in The Frontiers of Citizenship, ed. Vogel, Ursula and Moran, Michael (London, 1991), 58–85. Pioneering works on this question were of course Pateman, Carole, The Disorder of Women: Democracy, Feminism, and Political Theory (Cambridge, 1989), esp. 11, and The Sexual Contract (Cambridge, 1988).

16 Kerber, Linda, No Constitutional Right to Be Ladies: Women and the Obligations of Citizenship (New York, 1998), xxiii. Kerber follows a series of similar questions through U.S. case law. See especially her distinction between political rights expressed in nationality and civil rights constrained by coverture, 35–46.

21 The fullest account to date of these campaigns is Baldwin, “Subject to Empire.” Also see Klug, “`Oh, to be in England.'” For roughly parallel developments in the United States, see Bredbrenner, Candace Lewis, A Nationality of Her Own: Women, Marriage, and the Law of Citizenship (Berkeley, 1998).

26 This estimate is based on my ongoing tabulations. In France, too, the most common form of “mixed marriage” was that between a male migrant and a native woman. Noiriel, French Melting Pot, 152.

31 Between 1608 and 1870 British subjects derived their status from the crown and not the state. Expatriation, naturalization, or marriage could not deprive a British-born man or woman of his or her nationality; see Baldwin, “Subject to Empire,” 525–26. But “under an 1870 statute any British woman who married an alien would lose her British subject status, while men who married aliens retained this status and extended it to their wives”; see Hansen, Randall, Citizenship and Immigration in Post-war Britain (Oxford, 2000), 52. Also see Klug, “`Oh, to be in England,'” 22. The continuing exclusion of exogamous widows ran counter to late nineteenth-century trends, including the gradual lifting of coverture and the obsession with population manifested in eugenics; Bredbrenner, A Nationality of Her Own, 19. Baldwin shows it was specifically kept in place to maximize the extent of British nationality, thus loyalty, in the colonies; see “Subject to Empire.”

38 Ruth Lister, after Nancy Fraser, divided the public sphere into three realms; the state, the economy of paid employment, and public discourse. Because the local economy depended on noncitizens, public discourse in South Shields may perhaps have been more inclusive of nonlocals than the state. Lister, “Citizenship Engendered,” 169.

42 Baldwin, “Subject to Empire,” 525–26; Vogel argues that marriage not only effectively erases women's civil personhood, but that citizenship itself is premised on the citizen's domination of “his” wife. “Is Citizenship Gender-Specific?” 62–63.

43 Brubaker acknowledged that while “naturalization may be open to … all persons meeting certain conditions … the opportunity to satisfy these conditions is itself closed.” See Citizenship and Nationhood, 34.

45 “Nationalist discourse silences and marginalizes women from public roles” including “property, education, profession and politics—all those opportunities that qualified men for roles in the public sphere.” Eley and Suny, “From the Moment of Social History,” 26.

46 The existence of his wife prompted Home Office personnel to make an exception in favor of Peter Julius Jensen's 1912 naturalization petition, for example, for they reasoned, “it is very likely the applicant who is married keeps a house permanently and is therefore established in the UK.” PRO, HO144/1181/217650.

49 These were accompanied by ad hominem attacks on Home Office officials such as John Pedder and George Cave. Troup, “Treatment of Alien Enemies,” fol. 132; Panayi, Enemy in Our Midst, esp. 193. Panayi labels First World War–era anti-Germanism the worst outbreak of xenophobia since the thirteenth-century expulsion of British Jewry in “The Destruction of the German Communities,” 113, 121–23, 125, 129, and Immigration, Ethnicity and Racism, 124.

64 This was reflected in the injured tone with which officials repeatedly described “a British woman who voluntarily throws her lot in with an alien by marrying him,” quoted in Baldwin, “Subject to Empire,” 541.

73 Ironically, Frederick and Charles Otto, as well as Theodor Sommer, locally born like their mothers, remained British subjects by right of jus soli. The Otto household can be found in the 1891 Census Enumerators’ Books (CEB), RG12/4159, fol. 122v, residing at 122 and 124 John Williamson Street in Westoe District #34. Paul and Bessie Summers and their two young children were found residing at 2 Dockwray Bank in Westoe District #30, CEB, RG12/4159 fol. 10v.

80 In contrast, in France before 1927 legislation permitting French women to retain their citizenship in spite of marriage, fully 20 percent of naturalizations were actually “reintegrations” of French-born women who had lost their nationality through marrying a foreign national. Noiriel, French Melting Pot, 64, 158–59.

81 Baldwin, “Subject to Empire,” 553–54. Also see, for an abortive effort by New Zealand and Australia to allow women to opt out of acquiring their husbands’ nationality at marriage, Colonial Office Circular Despatch D#71, “Nationality of Married Women,” 18 October 1935, PRO, CO232/1322/18.

83 Gordon, Paul, Policing Immigration: Britain's Internal Controls (London, 1985), 39. When the position was equalized in the 1980s, it was by depriving New Commonwealth–born men of spousal rights, not by extending them to women. Hansen, Citizenship and Immigration, 230–31.

85 The reference is of course to Anderson, Benedict's landmark work Imagined Communities: Reflections on the Origin and Spread of Nationalism (1983; London, 1991). For a critique of Anderson's gender-blind analysis, see Pierson, Ruth Roach, “Nations: Gendered, Racialized, Crossed with Empire,” in Gendered Nations: Nationalism and Gender Order in the Long Nineteenth Century, ed. Blom, Ida, Hagemann, Karen, and Hall, Catherine (Oxford, 2000), 41–43. Prasenjit Duara questioned whether states and subjects conceived of nationality in the same way, suggesting the existence of “multiple and overlapping” imagined communities, in Eley and Suny, Becoming National, 151–53.

92 This point is made effectively by Yuval-Davis in “Nationalism and Racism,” 186 and passim, and was of course the argument in Hobsbawm, Eric and Ranger, Terence, eds., The Invention of Tradition (Cambridge, 1980); also see Noiriel, French Melting Pot, 215–16; Doty, “Sovereignty and the Nation,” 122.

93 The formulation “border guards” is that of Yuval-Davis, “Nationalism and Racism,” 191.

Outsiders in the Land of Their Birth: Exogamy, Citizenship, and Identity in War and Peace