Ordination Ritual and Practice in the Welsh-English Frontier, circa 1540–1640 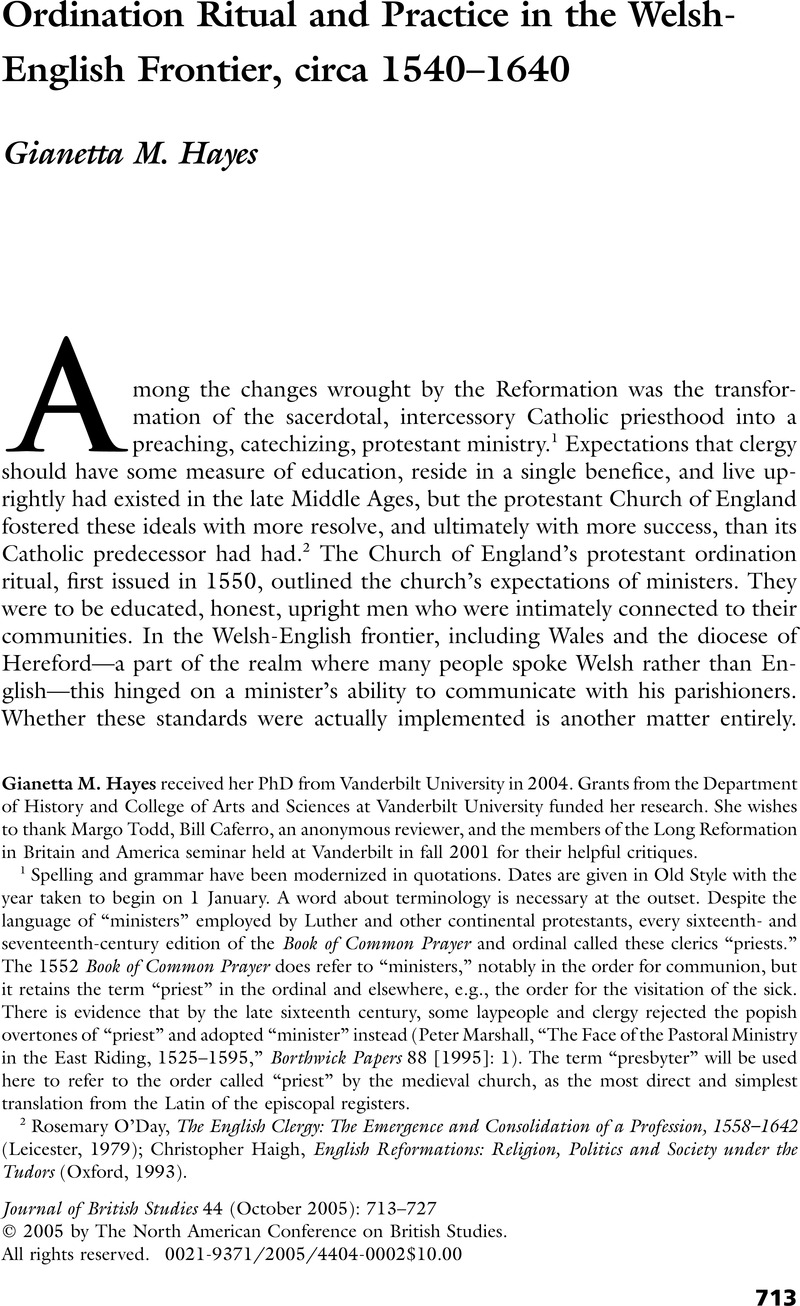 1 Spelling and grammar have been modernized in quotations. Dates are given in Old Style with the year taken to begin on 1 January. A word about terminology is necessary at the outset. Despite the language of “ministers” employed by Luther and other continental protestants, every sixteenth- and seventeenth-century edition of the Book of Common Prayer and ordinal called these clerics “priests.” The 1552 Book of Common Prayer does refer to “ministers,” notably in the order for communion, but it retains the term “priest” in the ordinal and elsewhere, e.g., the order for the visitation of the sick. There is evidence that by the late sixteenth century, some laypeople and clergy rejected the popish overtones of “priest” and adopted “minister” instead (Peter Marshall, “The Face of the Pastoral Ministry in the East Riding, 1525–1595,” Borthwick Papers 88 [1995]: 1). The term “presbyter” will be used here to refer to the order called “priest” by the medieval church, as the most direct and simplest translation from the Latin of the episcopal registers.

2 O’Day, Rosemary, The English Clergy: The Emergence and Consolidation of a Profession, 1558–1642 (Leicester, 1979); Haigh, Christopher, English Reformations: Religion, Politics and Society under the Tudors (Oxford, 1993).

4 The exception to this historiographical lacuna, for the Scottish-English border, is Houston, R. A., Scottish Literacy and the Scottish Identity: Illiteracy and Society in Scotland and Northern England, 1600–1800 (Cambridge, 1985). Compare Edwards, Kathryn A., Families and Frontiers: Re-creating Communities and Boundaries in the Early Modern Burgundies (Boston, 2002).

6 Adelman, Jeremy and Aron, Stephen, “From Borderlands to Borders: Empires, Nation-States, and the Peoples in Between in North American History,” American Historical Review 104 (1999): 815.

8 A forme and maner of makyng and consecratyng of Archebisshopes, Bisshopes, Priestes and Deacons (London, 1550). The date of publication was before 25 March, so the title page of the ordinal reads 1549.

21 At each episcopal visitation, every cleric had to present his letters of orders and any licenses he held. This information was sometimes recorded in a call book, two of which survive for the diocese of Hereford: Herefordshire Record Office (HRO), HD5/1/6 for 1614, and HD5/1/14, apparently begun in 1630 and amended during subsequent visitations over the next ten years. Because they record unbeneficed curates as well as holders of livings, they provide a clear snapshot of all the clerics serving in that diocese. These call books also include clergy ordained by bishops of Welsh dioceses—William Hughes and John Hanmer of St. Asaph, and Marmaduke Middleton, Anthony Rudd, Richard Milbourne, and Theophilus Field of St. David’s—and by Herbert Westfaling and Augustine Lindsell of Hereford. This information, however, is too fragmentary to indicate general trends. In the absence of the registers of these eight bishops, the call books are helpful in showing that they did, in fact, ordain clerics, which would otherwise be unknown.

22 A title, supplied either by a patron or by an ordinand's own resources, was a guarantee of financial support for a newly ordained cleric, who was supposed to live off his title until he found a benefice.

24 A total of seven ap Ievans were ordained in Bangor in this period. National Library of Wales (NLW), B/BR/2.

25 See Griffith, Learning, Law and Religion, for a similar use of surnames.

29 The registers of the pre-Reformation bishops of Lincoln record only the MA and beyond—holders of the BA are not identified as graduates—so it is possible that Bulkeley's registrar followed a similar policy. Bowker, Margaret, The Secular Clergy in the Diocese of Lincoln, 1495–1520 (Cambridge, 1968), chap. 2.

31 The information given in the registers has been augmented by cross-referencing the names of graduate ordinands with Foster, Joseph, Alumni Oxonienses, 1500–1715, 2 vols. (Nendeln, 1968); and Venn, John and Venn, J. A., Alumni Cantabrigienses, pt. 1 (Cambridge, 1924). The names of some candidates (e.g., Thomas Jones) are simply too common for them to be identified with certainty.

41 NLW, SA/MB/14, fol. 40r. Since the entire Bible had not yet been translated into Welsh, Davies probably meant these clergy to learn these Scriptures in English.

45 The prime example of this, from the Welsh side, is the copious work of Glanmor Williams, cited in nn. 5 and 7 above. But admirable historians of England have done the same: see Dickens, A. G., The English Reformation, 2nd ed. (University Park, PA, 1989); Haigh, English Reformations; and Duffy, Eamon, The Stripping of the Altars: Traditional Religion in England, 1400–1580 (New Haven, CT, 1992).

53 The political aspect of Mainwaring's actions may be significant. In 1627, before he was sent to St. David’s, the future bishop preached two “uncompromisingly absolutist” sermons in favor of the king's right to tax without Parliament's consent before Charles I, who then ordered them printed as Religion and alegiance in two sermons … (London, 1627). Parliament impeached Mainwaring the next year. Charles ordered Mainwaring's sermons suppressed while upholding the principles thereof. Sommerville, J. P., Politics and Ideology in England, 1603–1640 (London, 1986), 127–31. Mainwaring may have sought to pack his clergy with men sympathetic to his politics.

55 Laud, William, “The Archbishop's Account of His Province to the King, for the Year 1638,” in Works (Oxford, 1847–60), 5:359. Though no evidence concerning this exists, it is possible that Welsh dioceses drew English ordinands of lower caliber because the standards there were necessarily lower. I am grateful to the reader for the Journal of British Studies for this suggestion.

59 Palmer, Patricia, Language and Conquest in Early Modern Ireland: English Renaissance Literature and Elizabethan Imperial Expansion (Cambridge, 2001), 127. Before 1611, Irish clergy were expected either to use the English prayer book, which Irish speakers could not understand, or, as a 1560 Act of Parliament authorized, to translate the protestant services into Latin. That the Church of Ireland compromised so fundamental a protestant principle as the use of the vernacular indicates how rigid the church's anglicization policy was.

Ordination Ritual and Practice in the Welsh-English Frontier, circa 1540–1640