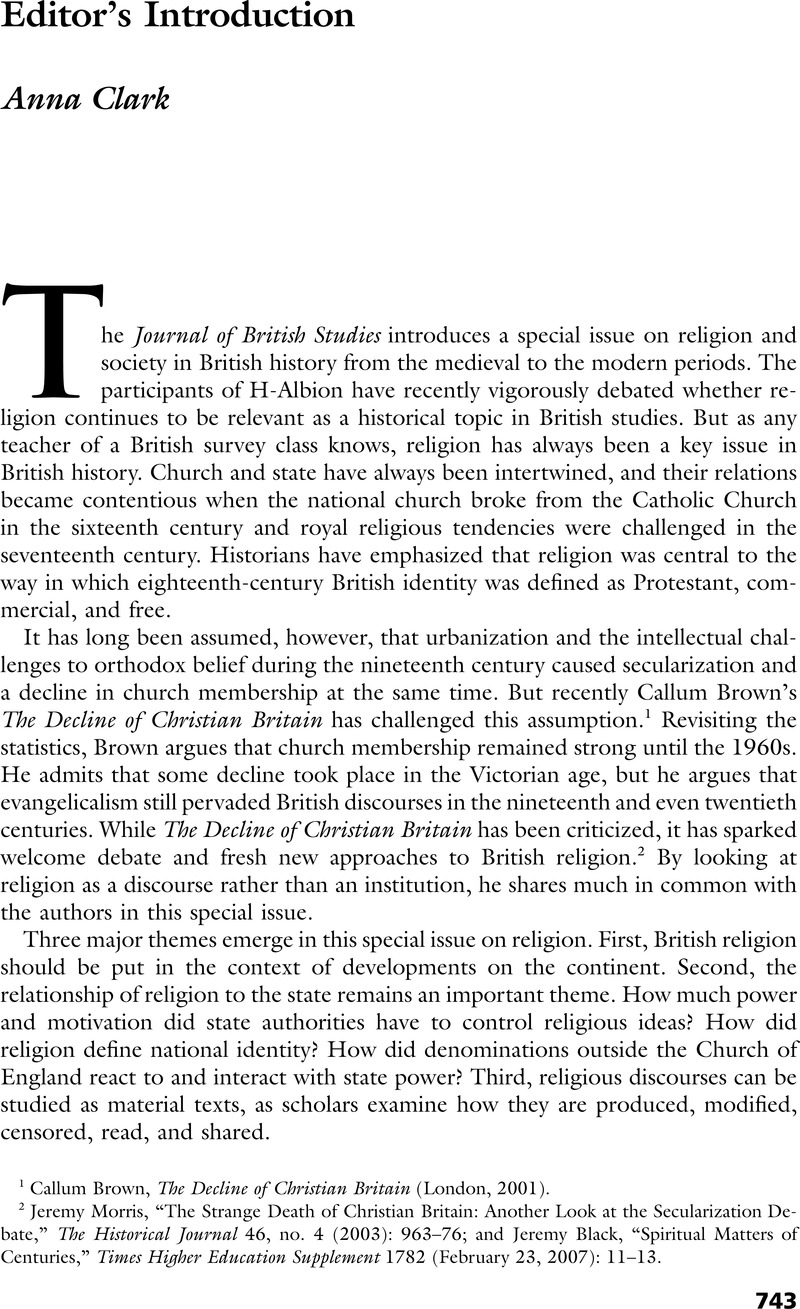 An abstract is not available for this content so a preview has been provided. To view the full text please use the links above to select your preferred format.
Type
Editorial
Information
Journal of British Studies , Volume 46 , Issue 4 , October 2007 , pp. 743 - 745
DOI: https://doi.org/10.1086/520487[Opens in a new window]
Copyright
Copyright © North American Conference of British Studies 2007

The Journal of British Studies introduces a special issue on religion and society in British history from the medieval to the modern periods. The participants of H-Albion have recently vigorously debated whether religion continues to be relevant as a historical topic in British studies. But as any teacher of a British survey class knows, religion has always been a key issue in British history. Church and state have always been intertwined, and their relations became contentious when the national church broke from the Catholic Church in the sixteenth century and royal religious tendencies were challenged in the seventeenth century. Historians have emphasized that religion was central to the way in which eighteenth-century British identity was defined as Protestant, commercial, and free.

It has long been assumed, however, that urbanization and the intellectual challenges to orthodox belief during the nineteenth century caused secularization and a decline in church membership at the same time. But recently Callum Brown's The Decline of Christian Britain has challenged this assumption.Footnote 1 Revisiting the statistics, Brown argues that church membership remained strong until the 1960s. He admits that some decline took place in the Victorian age, but he argues that evangelicalism still pervaded British discourses in the nineteenth and even twentieth centuries. While The Decline of Christian Britain has been criticized, it has sparked welcome debate and fresh new approaches to British religion.Footnote 2 By looking at religion as a discourse rather than an institution, he shares much in common with the authors in this special issue.

Three major themes emerge in this special issue on religion. First, British religion should be put in the context of developments on the continent. Second, the relationship of religion to the state remains an important theme. How much power and motivation did state authorities have to control religious ideas? How did religion define national identity? How did denominations outside the Church of England react to and interact with state power? Third, religious discourses can be studied as material texts, as scholars examine how they are produced, modified, censored, read, and shared.

We open our issue with a roundtable on Kathryn Kerby-Fulton's Books under Suspicion: Censorship and Tolerance of Revelatory Writing in Late Medieval England. Her book shows how subversive ideas could be smuggled into England from the continent through revelatory writings. Authorities often censored these manuscripts, but other copies sometimes still circulated. Kerby-Fulton combines historical context, an analysis of the manuscripts as material objects, and a theological and literary examination of the texts themselves in an unusually interdisciplinary fashion. John Arnold, Dyan Elliott, Anne Hudson, and Scott Lucas all suggest ways in which the ideas of this important book can be further explored.

Texts and heresies are also a theme in our next article, Megan Hickerson's “Negotiating Heresy in Tudor England: Anne Askew and the Bishop of London.” Henry VIII cut ties with the pope without rejecting Catholic doctrine, which posed a problem for English evangelicals committed to challenging it. Anne Askew, for instance, rejected the doctrine of transubstantiation, that the bread and wine of the Eucharist actually become the body and blood of Christ. Previous scholars have suggested that during her first examination by Bishop Bonner for heresy, she equivocated and subtly modified her beliefs so as to escape conviction. However, through a close analysis of the text of Askew's first examination, Hickerson argues that Bonner actually allowed Askew to evade condemnation. As Hickerson points out, Henry's ministers and bishops actually negotiated with religious reformers during the 1530s and early 1540s, instead of just persecuting them. However, by 1546 the tide had turned; after Bishop Gardiner examined Askew for a second time, she was burned at the stake.

Andrew Cambers challenges the assumption that Puritans developed the notion of the individualistic, interior self by examining their souls in private diaries—a theory related to the sociology of Max Weber and further developed by many historians. Rather, in “Reading, the Godly, and Self-Writing in England, circa 1580–1720,” Cambers demonstrates that spiritual diaries were shared as part of a collective spiritual process. By closely examining the diaries as physical artifacts, he demonstrates how they were passed around among families and friends and preserved for future generations. Cambers thus strengthens the tendency within the historiography of Puritanism that shows that those who saw themselves as the “godly” formed a culture rather than just a theology.

Our next three articles, on the modern period, concern the relationship of religion to the state. In the nineteenth century, German scholars began to examine the Bible as a historical document composed by many different authors with different interpretations. As Michael Ledger-Lomas writes in “‘Glimpses of the Great Conflict': English Congregationalists and the European Crisis of Faith, circa 1840–1875,” this “higher criticism” threatened the fate of many Christians, including Congregationalists. But unlike the Henrician church, of course, the Congregationalists could not rely on the power of the state to enforce doctrine. Indeed, Congregationalists had long defined themselves as a denomination based on individual conversion and the autonomy of individual congregations. To combat the higher criticism, Congregationalist leaders engaged intellectually with Continental thinkers. Ultimately, they argued that a close relation between church and state alienated people from religion and led to secularization, and campaigned for the disestablishment of the state Church of England.

Religious differences played an important role in delaying the coming of state education in the nineteenth century in Britain. After 1833, the state subsidized Anglican and Nonconformist elementary school construction, but the Catholic Church only began to receive state funds for this purpose in 1847. As a result, the Catholic Church became actively involved in the provision of education, and therefore politics. As Eric Tenbus shows in his article “‘We Fight for the Cause of God': English Catholics, the Education of the Poor, and the Transformation of Catholic Identity in Victorian Britain,” at first, the Church's schools commission was rather defensive toward the government. But soon, Tenbus argues, the education issue provided an opportunity for Catholics to coalesce politically into a new more assertive religious and political identity.

The Protestant Church of England has often been seen as a central component of British identity. As Matthew Grimley argues in his article, “The Religion of Englishness: Puritanism, Providentialism, and ‘National Character,’ 1918–1945,” this theme persisted through the first half of the twentieth century. Following Callum Brown, Grimley challenges the secularization thesis, demonstrating that church membership rose in the 1920s. The Church of England began to be celebrated in a somewhat nostalgic fashion as quintessentially English, rather than British, as the Church of Scotland became less established. Yet the Church of England did not have a monopoly on Protestant British identity. Grimley points out that commentators often celebrated Britain's Puritan heritage as imparting a healthy suspicion of strong state power to its national identity. However, by the 1960s, the language of national character evaporated in the face of imperial decline and immigration. Grimley suggests that this phenomenon might help explain the precipitous fall in church membership in the 1960s.

All of the research articles in this issue went through the usual submission and reviewing process, and most came in response to a call for papers on the topic of religion and society in Britain. Our articles include selections on the Church of England as well as medieval heretics, Victorian Catholics, and Congregationalists.Footnote 3 No articles were submitted in time on other religious traditions, including Judaism and Islam, although we did actively solicit them. However, we will have two articles on Islam and Muslims in Britain in the April 2008 issue of the journal.