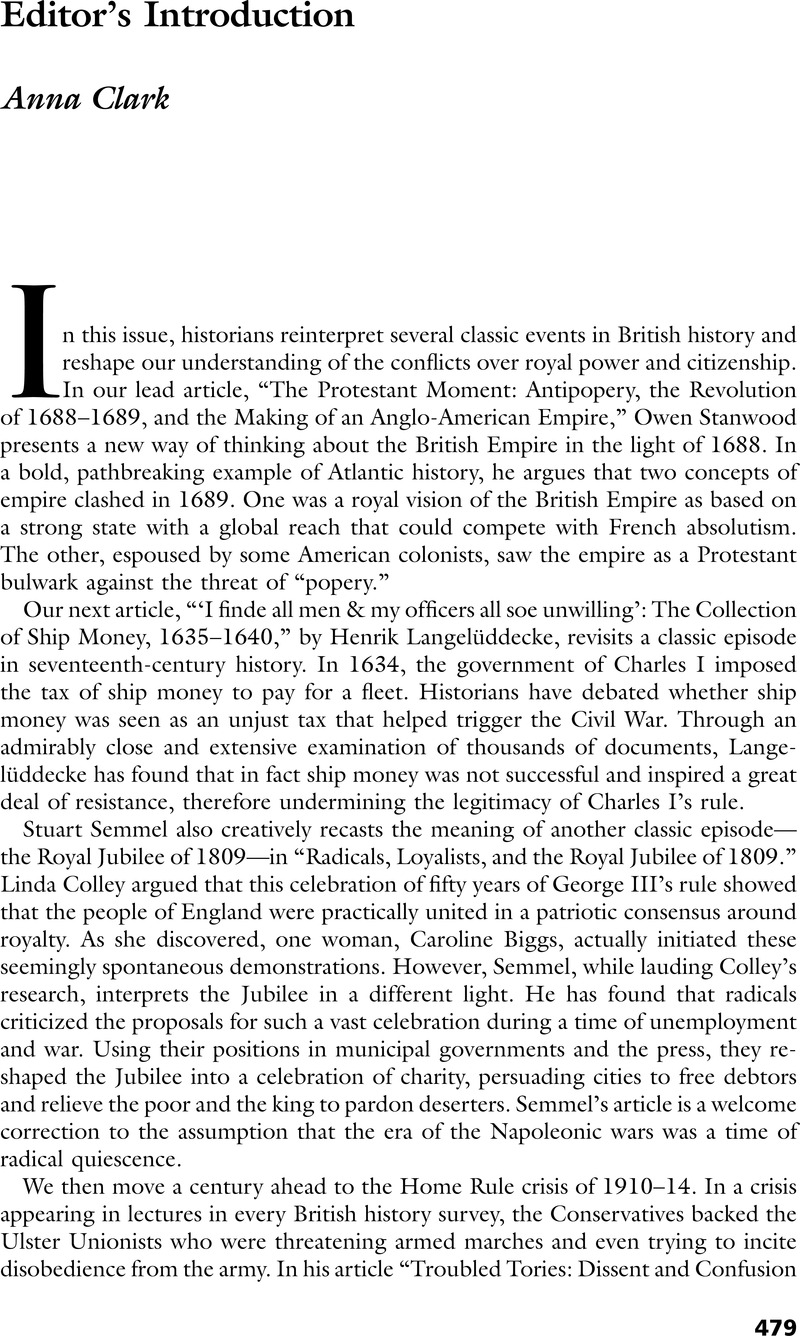 An abstract is not available for this content so a preview has been provided. To view the full text please use the links above to select your preferred format.
Type
Editorial
Information
Journal of British Studies , Volume 46 , Issue 3 , July 2007 , pp. 479 - 480
DOI: https://doi.org/10.1086/515440[Opens in a new window]
Copyright
Copyright © North American Conference of British Studies 2007

In this issue, historians reinterpret several classic events in British history and reshape our understanding of the conflicts over royal power and citizenship. In our lead article, “The Protestant Moment: Antipopery, the Revolution of 1688–1689, and the Making of an Anglo-American Empire,” Owen Stanwood presents a new way of thinking about the British Empire in the light of 1688. In a bold, pathbreaking example of Atlantic history, he argues that two concepts of empire clashed in 1689. One was a royal vision of the British Empire as based on a strong state with a global reach that could compete with French absolutism. The other, espoused by some American colonists, saw the empire as a Protestant bulwark against the threat of “popery.”

Our next article, “‘I finde all men & my officers all soe unwilling’: The Collection of Ship Money, 1635–1640,” by Henrik Langelüddecke, revisits a classic episode in seventeenth-century history. In 1634, the government of Charles I imposed the tax of ship money to pay for a fleet. Historians have debated whether ship money was seen as an unjust tax that helped trigger the Civil War. Through an admirably close and extensive examination of thousands of documents, Langelüddecke has found that in fact ship money was not successful and inspired a great deal of resistance, therefore undermining the legitimacy of Charles I's rule.

Stuart Semmel also creatively recasts the meaning of another classic episode—the Royal Jubilee of 1809—in “Radicals, Loyalists, and the Royal Jubilee of 1809.” Linda Colley argued that this celebration of fifty years of George III's rule showed that the people of England were practically united in a patriotic consensus around royalty. As she discovered, one woman, Caroline Biggs, actually initiated these seemingly spontaneous demonstrations. However, Semmel, while lauding Colley's research, interprets the Jubilee in a different light. He has found that radicals criticized the proposals for such a vast celebration during a time of unemployment and war. Using their positions in municipal governments and the press, they reshaped the Jubilee into a celebration of charity, persuading cities to free debtors and relieve the poor and the king to pardon deserters. Semmel's article is a welcome correction to the assumption that the era of the Napoleonic wars was a time of radical quiescence.

We then move a century ahead to the Home Rule crisis of 1910–14. In a crisis appearing in lectures in every British history survey, the Conservatives backed the Ulster Unionists who were threatening armed marches and even trying to incite disobedience from the army. In his article “Troubled Tories: Dissent and Confusion concerning the Party's Ulster Policy, 1910–1914,” Thomas C. Kennedy sheds new light on this incident by pointing out that many Conservatives, including southern Unionists and more cautious English Conservatives, opposed and questioned this policy. Others proposed an alternative federalist solution to the Irish problem. Why, then, asks Kennedy, did Andrew Bonar Law and the British Unionists follow such a dangerous policy? Bonar Law, he suggests, went along with the extremists in an effort to unite his party, but he was playing with fire, rescued only by the far worse conflagration of the outbreak of war in Europe.

When war broke out, citizenship became an issue for Jewish immigrants in London, as Sascha Auerbach explains in “Negotiating Nationalism: Jewish Conscription and Russian Repatriation in London's East End, 1916–1918.” In a provocative article, Auerbach illuminates a continuing theme in the Journal of British Studies—nation and citizenship. When the British government introduced conscription in 1916, they expected recent Jewish immigrants to demonstrate their loyalty to the nation by serving in the military. However, many young men in the East End resisted this call, arguing that “their membership in the nation did not depend upon military service” (596). By raising the question of possible repatriation to Russia during a time of revolutionary upheaval, Auerbach also implicitly raises the question of transnational identities.

In our survey-of-the-field article for this issue, Simon J. Potter brings in a fresh perspective from media studies in his article, “Webs, Networks, and Systems: Globalization and the Mass Media in the Nineteenth- and Twentieth-Century British Empire.” Some scholars have argued that communications in the empire—especially nineteenth-century newspapers—should be seen as a fluid, open network, with ideas flowing among the colonies and between the colonies and metropole. Potter argues that with the introduction of expensive cable news transmission and other imperial factors, imperial communications became more of a rigid system. By attending to communications, Potter also illuminates debates about national, imperial, and transnational identities.