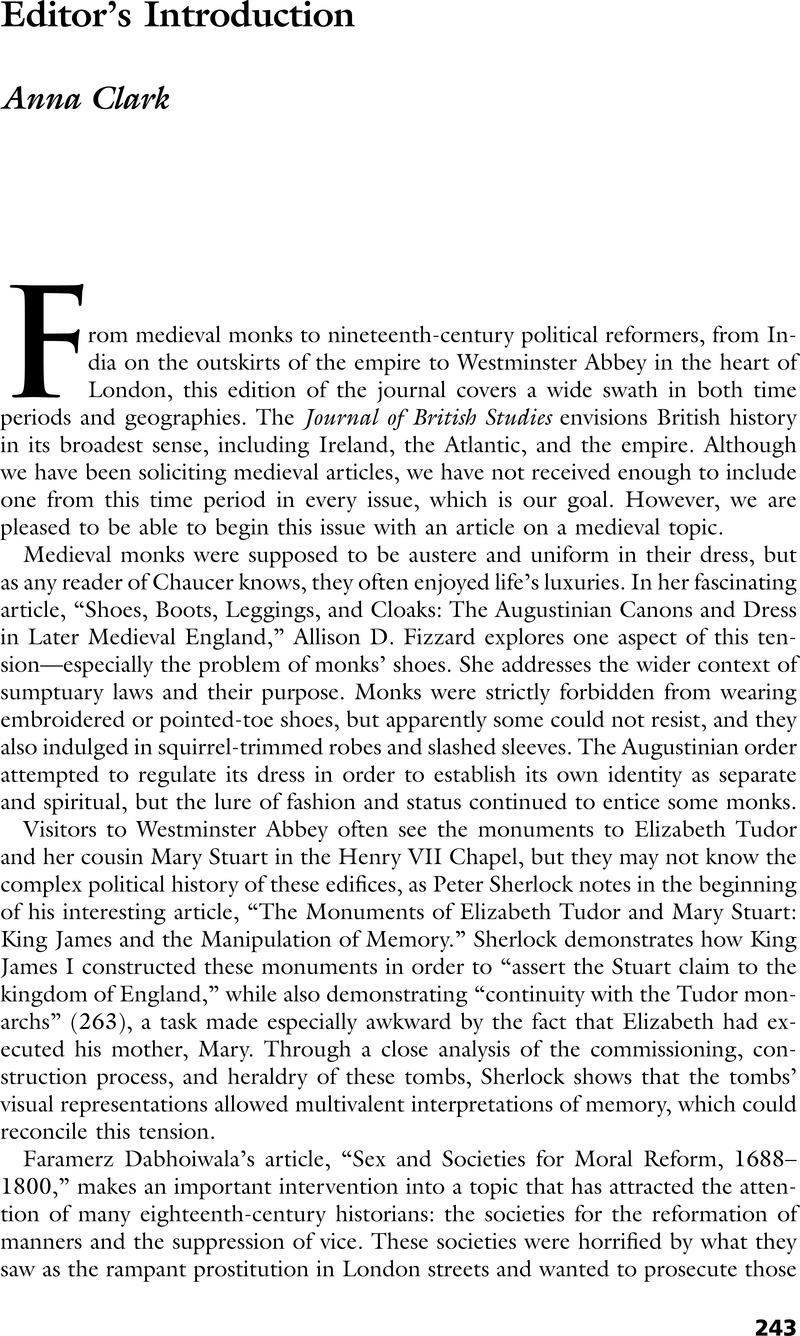 An abstract is not available for this content so a preview has been provided. To view the full text please use the links above to select your preferred format.
Type
Editorial
Information
Journal of British Studies , Volume 46 , Issue 2 , April 2007 , pp. 243 - 244
DOI: https://doi.org/10.1086/510886[Opens in a new window]
Copyright
Copyright © North American Conference of British Studies 2007

From medieval monks to nineteenth-century political reformers, from India on the outskirts of the empire to Westminster Abbey in the heart of London, this edition of the journal covers a wide swath in both time periods and geographies. The Journal of British Studies envisions British history in its broadest sense, including Ireland, the Atlantic, and the empire. Although we have been soliciting medieval articles, we have not received enough to include one from this time period in every issue, which is our goal. However, we are pleased to be able to begin this issue with an article on a medieval topic.

Medieval monks were supposed to be austere and uniform in their dress, but as any reader of Chaucer knows, they often enjoyed life's luxuries. In her fascinating article, “Shoes, Boots, Leggings, and Cloaks: The Augustinian Canons and Dress in Later Medieval England,” Allison D. Fizzard explores one aspect of this tension—especially the problem of monks’ shoes. She addresses the wider context of sumptuary laws and their purpose. Monks were strictly forbidden from wearing embroidered or pointed-toe shoes, but apparently some could not resist, and they also indulged in squirrel-trimmed robes and slashed sleeves. The Augustinian order attempted to regulate its dress in order to establish its own identity as separate and spiritual, but the lure of fashion and status continued to entice some monks.

Visitors to Westminster Abbey often see the monuments to Elizabeth Tudor and her cousin Mary Stuart in the Henry VII Chapel, but they may not know the complex political history of these edifices, as Peter Sherlock notes in the beginning of his interesting article, “The Monuments of Elizabeth Tudor and Mary Stuart: King James and the Manipulation of Memory.” Sherlock demonstrates how King James I constructed these monuments in order to “assert the Stuart claim to the kingdom of England,” while also demonstrating “continuity with the Tudor monarchs” (263), a task made especially awkward by the fact that Elizabeth had executed his mother, Mary. Through a close analysis of the commissioning, construction process, and heraldry of these tombs, Sherlock shows that the tombs’ visual representations allowed multivalent interpretations of memory, which could reconcile this tension.

Faramerz Dabhoiwala's article, “Sex and Societies for Moral Reform, 1688–1800,” makes an important intervention into a topic that has attracted the attention of many eighteenth-century historians: the societies for the reformation of manners and the suppression of vice. These societies were horrified by what they saw as the rampant prostitution in London streets and wanted to prosecute those who were responsible. While historians have assumed that these were grassroots organizations, Dabhoiwala has found that they chiefly operated through paid agents. This article makes the startling argument that despite the recurrence of these societies in the early and late eighteenth century, the legal system became less and less involved in prosecutions for moral offenses.

Constitutional and political history has long been an important aspect of British studies, and in this issue we are pleased to publish Nancy LoPatin-Lummis's article, “The 1832 Reform Act Debate: Should the Suffrage Be Based on Property or Taxpaying?” Basing the franchise on taxpaying had certain roots in British politics, as in the “scot and lot” boroughs where taxpaying householders could vote, and of course the claim “no taxation without representation” had inspired late eighteenth-century reformers. But it has generally been assumed that the 1832 Reform Act was based on the idea of enfranchising the middle class on the basis of property. Historians have thought that the idea of suffrage based on the taxpaying householder only emerged in mainstream politics beginning in the late 1840s and 1850s and came into prominence in the debates over the 1867 Reform Act. However, LoPatin-Lummis demonstrates that two politicians, Charles Tennyson and Joseph Parkes, made a concerted effort to introduce taxpaying, or “scot and lot” suffrage, into the 1832 Reform Act. They failed, but they set an important precedent, and the debates over 1832 should look different as a result.

Our next article reaches out to the empire and environmental history, a welcome new approach in British studies. In “Engineering the Empire: British Water Supply Systems and Colonial Societies, 1850–1900,” John Broich ingeniously demonstrates that the British tried to export their water-management systems into the empire. Broich demonstrates how “Bombay and Manchester were ‘colonized' in the same way” (365) through the imposition of water schemes that were expected to improve the morals as well as the health of inhabitants, but colonial subjects were not always amenable to these “improvements.” They often resisted, for instance, when the British tried to close down holy Indian wells so that city inhabitants would use piped-in water. The environment also often defeated the best-laid plans, as when pipes corroded in acidic soil. Broich adds to the theory and historiography of governmentality by showing that these schemes often failed because of British engineers’ lack of local knowledge in the colonies.

Finally, we return to the subject of memory in Guy Beiner's “Between Trauma and Triumphalism: The Easter Rising, the Somme, and the Crux of Deep Memory in Ireland.” This piece beautifully sets out the vexed problem of historical memory—or obsession—in Ireland, by tying together nationalist and unionist traditions of memory. Both, Beiner points out, are structured around the theme of triumphalist commemorations of traumatic events. The nationalist obsession with the Easter Rising is well known, but Beiner demonstrates that the Ulster unionists commemorated the Battle of the Somme, where so many northern Irish soldiers died, as a similar tragic triumph. Both sides have used victimhood as a bargaining chip in the political process, but current politicians are trying to create versions of commemoration that can get beyond the partisan divide.