Radicals, Loyalists, and the Royal Jubilee of 1809 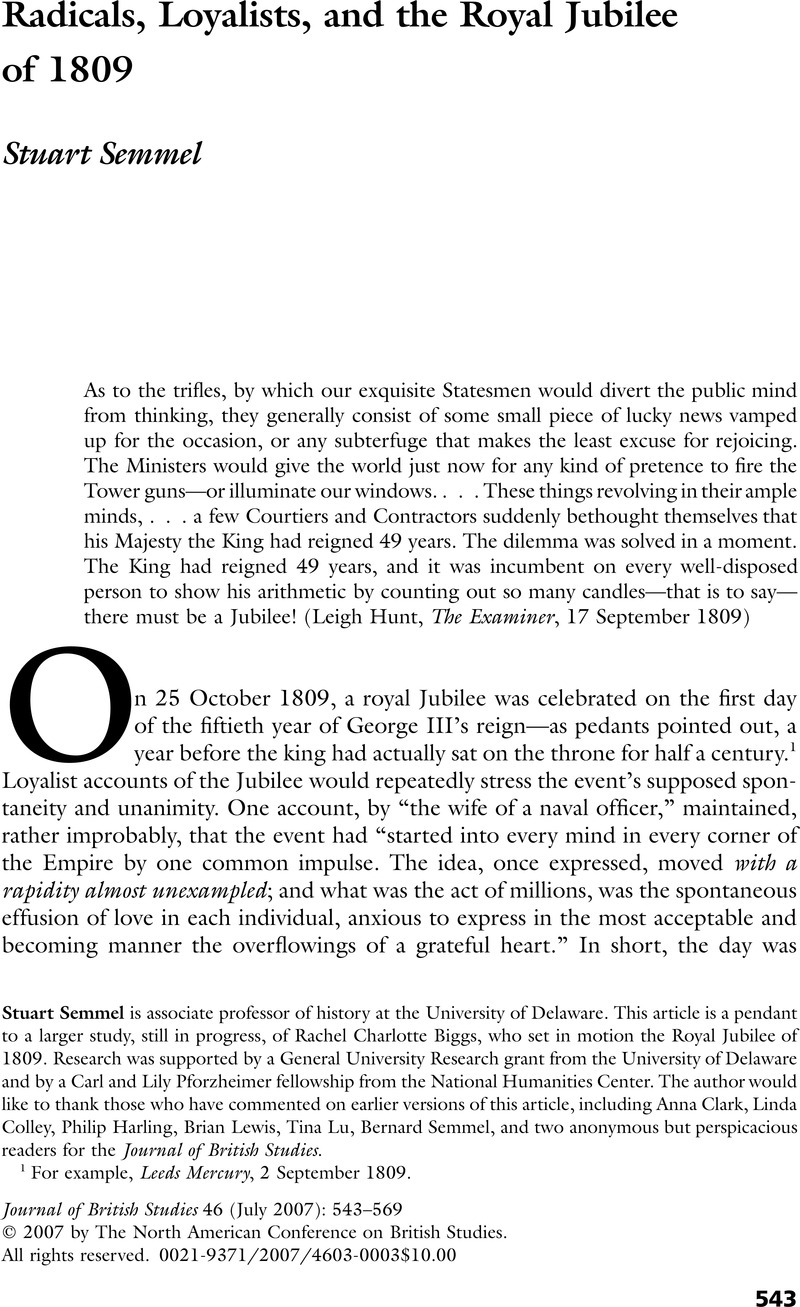 An abstract is not available for this content so a preview has been provided. Please use the Get access link above for information on how to access this content.
Type
Research Article
Information
Journal of British Studies , Volume 46 , Issue 3 , July 2007 , pp. 543 - 569
DOI: https://doi.org/10.1086/515443[Opens in a new window]
Copyright
Copyright © North American Conference of British Studies 2007

5 See Colley, “Apotheosis,” 119–20, 122–24. The subtler shadings of Colley's analysis are lost in Christopher Hibbert's account of the event. Apart from misdating the Jubilee (he confuses it with the minor celebrations that took place a year later at the completion of George's fiftieth year of rule), Hibbert describes the event in monochromatically loyalist terms in George III: A Personal History (Harmondsworth, 1998), 390–92. For examples of radical criticism of the Jubilee, see Ditchfield, G. M., George III: An Essay on Monarchy (Basingstoke, 2002), 164–65CrossRefGoogle Scholar; Rogers, Nicholas, “Crowds and Political Festival in Georgian England,” in The Politics of the Excluded, c. 1500–1800, ed. Harris, Tim (Basingstoke, 2001), 233–64, esp. 256–57CrossRefGoogle Scholar.

10 For a contemporary claim of Jubilee celebrations in St. Vincent and Antigua—impossible, given how long it took for news to cross the Atlantic (unless the West Indian events were indeed spontaneous in their generation)—see “A Lady,” Account of the Celebration, 202.

12 Drescher, Seymour (summarizing Colley), “Whose Abolition? Popular Pressure and the Ending of the British Slave Trade,” Past and Present, no. 143 (May 1994): 156Google Scholar.

14 On the affair, see chap. 7 (“The Mary Clarke Affair and the System of Corruption”) of Clark, Anna, Scandal: The Sexual Politics of the British Constitution (Princeton, NJ, 2004), 148–76Google Scholar; and Harling, “Duke of York Affair.”

19 She may not have known this, but Biggs was behaving very much as Reeves himself had when he had launched the Association: he had not consulted in advance with Whitehall, so that “the Government might have the benefit of it, if it produced any, and none of the disgrace, if such was the fate of it” (quoted in Duffy, Michael, “William Pitt and the Origins of the Loyalist Association Movement of 1792,” Historical Journal 39 [December 1996]: 943–62, 944)CrossRefGoogle Scholar. On Reeves, see Beedell, A. V., “John Reeves's Prosecution for a Seditious Libel, 1795–1796: A Study in Political Cynicism,” Historical Journal 36, no. 4 (December 1993): 799–824CrossRefGoogle Scholar; and Polden, Patrick, “John Reeves as Superintendent of Aliens, 1803–1814,” Journal of Legal History 3 (1982): 31–51CrossRefGoogle Scholar.

45 Courier, 5 October 1809. The Times feared this banner was intended to stir up “disorders that might ultimately shake the whole frame of society” (The Times, 5 October 1809). Another “O. P.” placard, reported by Colley—“Be Britons on the 25th but riot on the 26th”—indicates that some protesters inclined to take a day of rest from their protests on the Jubilee day itself (“Apotheosis,” 126). For a variant (“rally” rather than “riot”) see British Press, 25 October 1809. On the “O. P.” riots, see Baer, Marc, Theatre and Disorder in Late Georgian London (Oxford, 1992)CrossRefGoogle Scholar.

50 Letter to the editor from “Observator,” Independent Whig, 24 September 1809, 1163 (and see Examiner, 17 September 1809, 601). The editor of a volume compiled for Victoria's Golden Jubilee claimed that in March 1809 “the tallow merchants and tallow chandlers began to accumulate large stores in anticipation of the expected great demand for candles in October,” but I have found no evidence of this in contemporary press accounts. If true, it might lessen Biggs's claims to have been the sole conceiver of a Jubilee, as her own efforts did not begin until the summer. Preston, Thomas, ed., Jubilee Jottings: The Jubilee of George the Third (London, 1887), xiGoogle Scholar.

53 Semmel, Napoleon and the British, 27. On Cobbett's radicalization, see 140–45. Cobbett would appeal to the home secretary, Lord Pelham, for protection from “the lawless mob” in the spring of 1802, when news of the Treaty of Amiens prompted threats of a second attack on his house if he failed to illuminate (letter to Pelham, 28 April 1802, Gen. MS 437, Beinecke Library, Yale University).

58 Her letter also warned that “the period seems fast approaching when the oppressors of mankind ‘shall be cut down as the grass, and be withered as the green herb’” (Independent Whig, 15 October 1809, 1190).

60 Barrell, John, The Spirit of Despotism: Invasions of Privacy in the 1790s (Oxford, 2006), 105Google Scholar, here summarizing Colley's “Apotheosis” argument. But see chap. 3 (“Weymouth Amusements”) of Barrell's book for a sophisticated discussion of how cracks could appear in this “myth of royal ordinariness” (106).

63 “An Account of the Grand Entertainment at Cabbage Merchant's Hall,” in The Jubilee of 1809, Containing a Poetical Epistle, 17.

75 Including The Times, the Morning Post, the Examiner, the Courier, and Cobbett's Political Register.

78 For example, Examiner, 29 October 1809, 700; and the caricatures “Which is Right or Regular and Quack Opinions on the Flushing Fever” (C. Williams) and “Rhyms [sic] for Grown Babie in the Ministerial Nursery” (George Cruikshank), both of which specifically associated the term with Curtis (M. Dorothy George, Catalogue of Political and Personal Satires Preserved in the Department of Prints and Drawings in the British Museum, vol. 8, nos. 11368, 11380 [London, 1870–1954]). The term “jollification” also turns up as a punch line in Arnold's play Britain's Jubilee (fol. 37), submitted to the Lord Chamberlain's Office on 21 October 1809. These would seem to be among the earliest British uses of the term (the Oxford English Dictionary's earliest example is American and also dates from 1809).

98 Courier, 20 October 1809. On similar developments in the Yorkshire towns of Wakefield and Beverley, see Leeds Mercury, 21 and 28 October 1809. Similarly, see Waylen, James, A History, Military and Municipal, of the Town (Otherwise Called the City) of Marlborough (London, 1854), 437Google Scholar.

102 The play's setting is ostensibly Barnstaple, but the play's audience would have recognized the description of the City's deliberations.

105 Reported in Leeds Mercury, 21 October 1809. For a similar link between ruler and humble subject—made equals by age—see the Scottish broadside ballad “The Jubilee; or the Shepherd and the King,” Bodleian Library Broadside Ballads online database (http://www.bodley.ox.ac.uk/ballads/ballads.htm), Harding B 25(1010), also titled “Jubilee for Jubilee, or Fifty Years Shepherd for Fifty a King,” Harding B 11(1943).

120 For York's “partial” illumination, see Leeds Mercury, 28 October 1809; the British Press, 21 October 1809, made the latter comment about Liverpool and a similar observation about Edinburgh.

125 The Examiner, 29 October 1809, 698; see also the many transparencies described in The Times and the British Press in the days following the Jubilee.

128 British Press, 31 October 1809. A great many such events are recorded in “A Lady,” Account of the Celebration.

130 British Press, 23 October 1809. Mighell received permission to use the Prince of Wales's Riding School for the occasion.

137 Examiner, 29 October 1809, 701. Cobbett similarly opined that London's illumination was “not a quarter part so general, or so bright, as upon any common occasion of a naval victory” (CWPR, 4 November 1789, 652–53). The Morning Post, by contrast, claimed there had never been an illumination “so universal or so brilliant” as that of 25 October and that “every lane or alley in the capital, exhibited a general blaze of joy on the occasion” (Morning Post, 26 October 1809).

144 See CWPR, 18 November 1809, 747–48. Treating the poor in the public manner exercised on the Jubilee “marked [them] out for a degraded cast, as if they had badges put upon their clothes, or, as some of the American negroes have, a burnt mark in their cheek.” It would have the effect of “reconciling the minds of the labouring people to a state of dependance and beggary, and to efface the small remains of that spirit, which formerly withheld their names from the list of paupers” (CWPR, 21 October 1809, 578).

146 Letter to the editor from “A Supporter of the Banners of Loyalty,” Morning Post, 20 October 1809; letter to the editor from “I. B.,” Morning Post, 24 October 1809. Consider, too, Fitzgerald's “Ode for the Royal Jubilee”: “If there's a Traitor in the land, / Who will not raise for George his hand, / Whose heart malignant grieves to see / All England rise in Jubilee! / Let the detested Monster find / Some cavern blacker than his mind! / There let him waste his life away, / Nor with his presence blast this Day” (criticized in CWPR, 4 November 1809, 647–48).

150 See CWPR, 28 October 1809, 640; CWPR, 14 October 1809, 515. The naval officer's wife who had hailed the Jubilee as the spontaneous “act of millions” denied that the day had been marked by “compulsory acclamations extorted from a joyless populace by the stern mandate of authority, solicitous to obtain the show of a popularity which it did not in reality possess”—if not a case of protesting too much, then certainly one of needlessly doing one's political antagonists’ spadework for them: “A Lady,” Account of the Celebration, xii.

154 “A New Song on the Jubilee,” Bodleian Library Broadside Ballads online database, Harding B 16(169b).

157 Chase, Malcolm, “From Millennium to Anniversary: The Concept of Jubilee in Late Eighteenth- and Nineteenth-Century England,” Past and Present, no. 129 (November 1990): 132–47CrossRefGoogle Scholar.

158 Quoted by Spence, Thomas, The Rights of Man Exhibited in a Lecture Read at the Philosophical Society in Newcastle (London, 1793)Google Scholar; quoted, in turn, by Chase, “From Millennium,” 135.

Radicals, Loyalists, and the Royal Jubilee of 1809
×

Radicals, Loyalists, and the Royal Jubilee of 1809
×