The Protestant Moment: Antipopery, the Revolution of 1688–1689, and the Making of an Anglo-American Empire 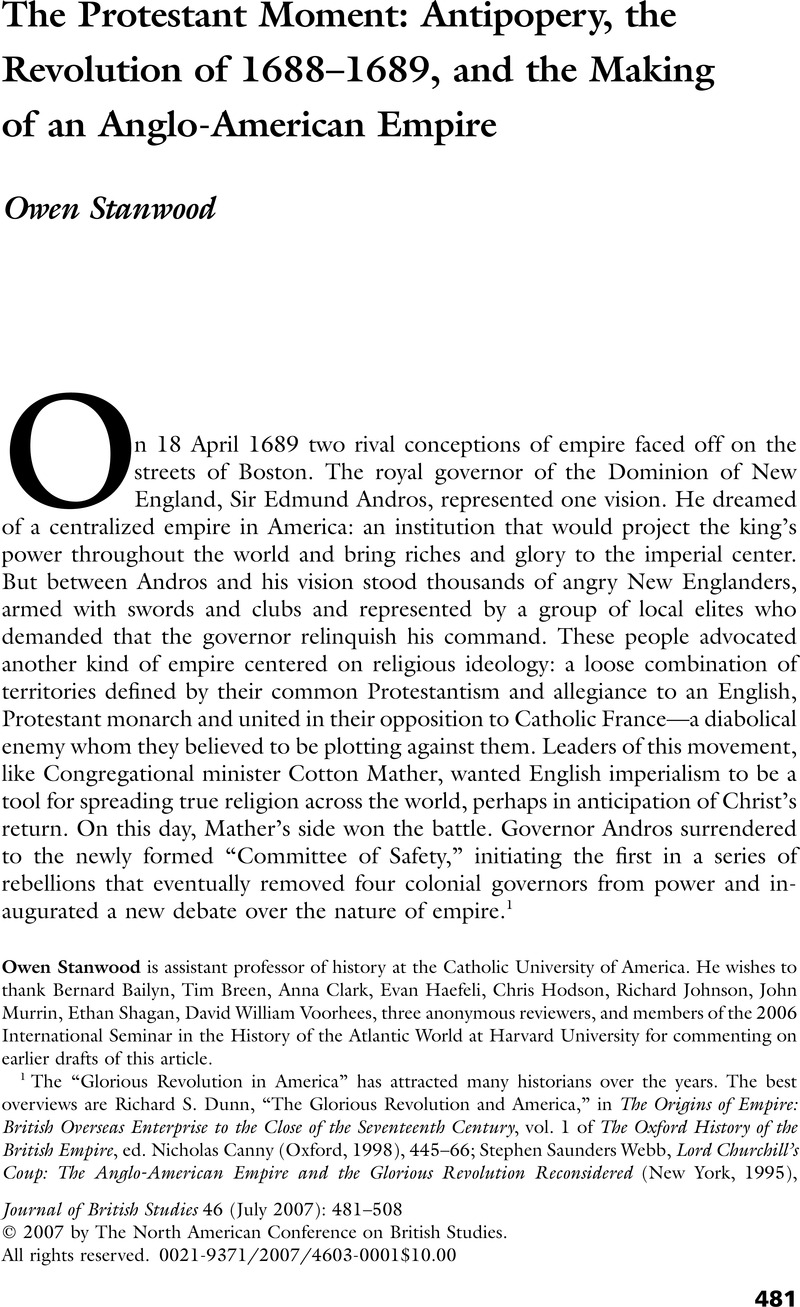 An abstract is not available for this content so a preview has been provided. Please use the Get access link above for information on how to access this content.
Type
Research Article
Information
Journal of British Studies , Volume 46 , Issue 3 , July 2007 , pp. 481 - 508
DOI: https://doi.org/10.1086/515441[Opens in a new window]
Copyright
Copyright © North American Conference of British Studies 2007

2 The most recent works on the beginnings of English imperialism have all placed it in the context of state building in the early eighteenth century; see esp. Armitage, David, The Ideological Origins of the British Empire (Cambridge, 2000)CrossRefGoogle Scholar; and Colley, Linda, Britons: Forging the Nation, 1707–1837 (New Haven, CT, 1992), 101–45Google Scholar. For a sense of the nature of the earliest English “imperial” efforts, see Games, Alison, “Beyond the Atlantic: English Globetrotters and Transoceanic Connections,” William and Mary Quarterly, 3rd ser., 63, no. 4 (October 2006): 675–92Google Scholar.

5 The absolutist motives of the later Stuarts have inspired much debate, with some protesting that the kings had neither the ability nor the inclination to build an absolute state; see Miller, John, “The Potential for ‘Absolutism’ in Later Stuart England,” History 69 (1984): 187–207CrossRefGoogle Scholar. In recent years, however, most later Stuart scholars agree that Charles II and James II had some absolutist pretensions, even if circumstances were very different from those in France; see John Morrill, “The Sensible Revolution,” in Israel, Anglo-Dutch Moment, 76–81; Harris, Tim, Restoration: Charles II and His Kingdoms, 1660–1685 (London, 2005), 211–59Google Scholar, and Revolution: The Great Crisis of the British Monarchy, 1685–1720 (London, 2006), 182–236Google Scholar; Pincus, Steve, “The European Catholic Context of the Revolution of 1688–89: Gallicanism, Innocent XI, and Catholic Opposition,” in Shaping the Stuart World, 1603–1714: The Atlantic Connection, ed. Macinnes, Allan I. and Williamson, Arthur H. (Leiden, 2006), 93–98Google Scholar.

21 These plans are detailed in Richter, Daniel K., The Ordeal of the Longhouse: The Peoples of the Iroquois League in the Era of European Colonization (Chapel Hill, NC, 1992), 148–61Google Scholar; Jennings, Francis, The Ambiguous Iroquois Empire: The Covenant Chain Confederation of Indian Tribes with English Colonies (New York, 1984), 172–94Google Scholar.

24 Information furnished by Nanning Hartense and others, 7 October 1687, NYCD, 3:437; Dongan to Lord President, NYCD, 3:430; “Coxe's Account of the English in the Mississippi Valley in the Seventeenth Century,” in The First Explorations of the Trans-Allegheny Region by the Virginians, 1650–1674, ed. Alvord, Clarence Walworth and Bidgood, Lee (Cleveland, 1912), 237–38Google Scholar. Marion's distinctive first name, taken from the Old Testament, also suggests Protestant heritage.

26 The Present State of New England by R[ichard] D[aniel], 23 December 1695, Blathwayt Papers, vol. 6, folder 5, John D. Rockefeller Library, Colonial Williamsburg [CW]; Blathwayt to Randolph, 10 March 1688, in Edward Randolph: Including His Letters and Official Papers from the New England, Middle, and Southern Colonies in America, and the West Indies, 1676–1703 (Randolph Letters), ed. Toppan, Robert N. and Goodrick, Alfred T. S. (Boston, 1898–1909), 4:216Google Scholar. Needless to say, the English portrait of New France was much rosier than the reality; French colonial officials made very similar arguments to their own king that the English colonies were better supported.

28 This is not to say that Tories did not care about religion or Whigs about commerce; they each combined religious and economic arguments in distinctive ways, though the links between these different kinds of arguments remain to be explored. For a discussion of Tory beliefs on political economy, see Steven C. A. Pincus, “Revolution in Political Economy and the Atlantic World” (paper presented at “Transformations: The Atlantic World in the Late Seventeenth Century,” Harvard University, 1 April 2006).

29 The uses of antipopery among these late seventeenth-century radicals resembled that of their forebears in early Stuart England, on whom see Lake, Peter, “Anti-Popery: The Structure of a Prejudice,” in Conflict in Early Stuart England: Studies in Religion and Politics, 1603–1642, ed. Cust, Richard and Hughes, Ann (London, 1989), 72–97Google Scholar.

44 Edward Randolph, “Present State of New England,” Randolph Letters, 2:243. Especially during the war's later stages, Massachusetts leaders feared that French agents were smuggling arms to Philip, but they also believed that Dutch merchants in Albany might be aiding the enemy; see Pulsipher, Jenny Hale, Subjects unto the Same King: Indians, English, and the Contest for Authority in Early New England (Philadelphia, 2005), 207–37Google Scholar.

57 Francis Nicholson to Fitz John Winthrop, 16 February 1690, Winthrop Family Papers, MHS; Affidavits of Greveraet and Brewerton, 13 December 1689, NYCD, 3:660; Deposition of John Winslow, Mass. Arch., 35:216; “A Vindication of New England (Prepared Chiefly by Increase Mather,) and Containing the Petition of the Episcopalians of Boston to the King,” in Whitmore, William H., ed., The Andros Tracts: Being a Collection of Pamphlets and Official Papers of the Andros Government and the Establishment of the Second Charter of Massachusetts (New York, 1868–74), 2:52Google Scholar. For analysis of how word of the revolution traveled to the colonies, see Steele, Ian K., “Communicating an English Revolution to the Colonies, 1688–89,” Journal of British Studies 24, no. 3 (July 1985): 333–57CrossRefGoogle Scholar.

58 Affidavits concerning the agreement of Andros with the Indians, NYCD, 3:659; TNA: PRO, CO 5/1081/41. New Yorkers had good reason to be afraid, as Louis XIV did propose an invasion of New York, after which all Protestants would be deported from the colony, and all French Protestants would be sent to prison in France; see Trudel, Marcel, “Au programme de la Nouvelle-France en 1689: Déporter la population du New-York,” in Mythes et réalités dans l’histoire du Québec (Montreal, 2001), 125–38Google Scholar.

63 Richard S. Dunn (“The Glorious Revolution and America,” 445, 457) identifies a fourth rebellion in the Leeward Islands, where Governor Nathaniel Johnson resigned under pressure in July 1689. Though there are interesting parallels with events on the mainland, I have omitted an in-depth analysis because the rebellion against Johnson did not have a significant popular component, and Johnson's enemies never defined themselves as partners in an international Protestant cause.

66 The phrase is from Speck, W. A., Reluctant Revolutionaries: Englishmen and the Revolution of 1688 (Oxford, 1988)Google Scholar.

69 Address of the Governor and Council to William and Mary, in Moody and Simmons, Glorious Revolution in Massachusetts, 78.

70 Breen (Character of the Good Ruler, 136–37) argued against Viola Barnes and earlier scholars that “by the time of the Glorious Revolution, property—more than godliness—served as the basis for political leadership and participation.” In a broader analysis, Jack Greene believes the revolution was a first step in the rise to power of colonial assemblies; see “The Glorious Revolution and the British Empire, 1688–1783,” in The Revolution of 1688–89: New Perspectives, ed. Schwoerer, Lois G. (Cambridge, 1992), 260–71Google Scholar; Yirush, Craig, “From the Perspective of Empire: The Common Law, Natural Rights, and the Formation of American Political Theory, 1688–1775” (PhD diss., Johns Hopkins University, 2004), 121–56Google Scholar.

74 “A Conjecture concerning Gog and Magog,” in Mede, Joseph, The Key of the Revelation, Searched and demonstrated out of the Naturall and Proper Characters of the Visions (London, 1650)Google Scholar; for Mather's disputation, see Magnalia Christi Americana, 123; Haefeli, Evan and Stanwood, Owen, “Jesuits, Huguenots, and the Apocalypse: The Origins of America's First French Book,” Proceedings of the American Antiquarian Society 116, pt. 1 (April 2006): 59–120Google Scholar.

76 For the most passionately secular interpretation of the Glorious Revolution, see Pincus, Steve, “‘To Protect English Liberties’: The English Nationalist Revolution of 1688–89,” in Protestantism and National Identity: Britain and Ireland, c. 1650–c. 1850, ed. Claydon, Tony and McBride, Ian (Cambridge, 1998), 75–104CrossRefGoogle Scholar; but compare with Claydon, William III and the Godly Revolution, and Johnston, Warren, “Revelation and the Revolution of 1688–89,” Historical Journal 48, no. 2 (June 2005): 351–89CrossRefGoogle Scholar.

78 “New England Vindicated From the Unjust Aspersions cast on the former Government there, by some late Considerations Pretending to Shew That the Charters in those Colonies were Taken from them on Account of their Destroying the Manufactures and Navigation of England,” Andros Tracts, 2:119–20; A Brief Relation of the State of New England, From the Beginning of that Plantation To this Present Year, 1689 (London, 1689)Google Scholar, Andros Tracts, 2:159; Hall, M. G., ed., “The Autobiography of Increase Mather,” Proceedings of the American Antiquarian Society 71 (1962): 333Google Scholar.

79 Eliot to Baxter, 6 July 1663, in Calendar of the Correspondence of Richard Baxter, ed. Keeble, N. H. and Nuttall, Geoffrey F. (Oxford, 1991), 2:39–40Google Scholar. For an interesting analysis of the relationship between Reformed and Republican thought, see Winship, Michael P., “Godly Republicanism and the Origins of the Massachusetts Polity,” William and Mary Quarterly, 3rd ser., 63, no. 3 (July 2006): 427–62Google Scholar. On Jefferson, see Onuf, Peter, Jefferson's Empire: The Language of American Nationhood (Charlottesville, VA, 2000)Google Scholar, though the idea of an “empire of liberty” based on commerce originated in the mid-1700s; Armitage, Ideological Origins, 195.

80 The best analysis of Leislerian political thought is Voorhees, David William, “‘The World Turned Upside Down’: The Foundations of Leislerian Political Thought,” in The Atlantic World in the Later Seventeenth Century: Essays on Jacob Leisler, Trade, and Networks, ed. Wellenreuther, Hermann (Göttingen, forthcoming)Google Scholar, which supplements and partially supplants Murrin, John M., “The Menacing Shadow of Louis XIV and the Rage of Jacob Leisler: The Constitutional Ordeal of Seventeenth-Century New York,” in New York and the Union: Contributions to the American Constitutional Experience, ed. Schechter, Stephen L. and Bernstein, Richard B. (Albany, 1990), 29–71Google Scholar. On the roots of Calvinist resistance theory, see Skinner, Quentin, The Foundations of Modern Political Thought (Cambridge, 1977), 2:239–348Google Scholar.

83 The Declaration of the Reasons and Motives For the Present Appearance in Arms of Their Majesties Protestant Subjects In the Province of Maryland (St. Mary’s, 1689)Google Scholar, in Andrews, Narratives of the Insurrections, 305–14; Carr and Jordan, Maryland's Revolution of Government, 46–83.

84 On the association, see Burnet, Gilbert, History of My Own Time, pt. 1, The Reign of Charles the Second (Oxford, 1897), 2:264–65Google Scholar; The History of the Association, Containing all the Debates in the Last House of Commons At Westminster: Concerning an Association, for the Preservation of the King's Person, and the Security of the Protestant Religion (London, 1682)Google Scholar.

88 Instructions for the Agents of the Colonie of the Massachusetts Bay in New England, 24 January 1690, Andros Tracts, 3:59.

100 Wadsworth, Benjamin, King William Lamented in America; Or, A Sermon occasion’d by the very Sorrowful tidings, of the Death of William III (Boston, 1702)Google Scholar. The argument here parallels one that Tony Claydon has made for England, claiming that William was able to build a centralized state where his Stuart predecessors failed because he used antipopery to foster national allegiance; Claydon, William III, 136–38.

104 Morrill, “Sensible Revolution,” calling on Trevelyan, G. M., The English Revolution (Oxford, 1938)Google Scholar. This Atlantic perspective on the Revolution tends to reinforce the conclusions of Tim Harris and Tony Claydon, who have emphasized popular and religious explanations.

* Views captured on Cambridge Core between September 2016 - 27th January 2021. This data will be updated every 24 hours.

The Protestant Moment: Antipopery, the Revolution of 1688–1689, and the Making of an Anglo-American Empire
×

The Protestant Moment: Antipopery, the Revolution of 1688–1689, and the Making of an Anglo-American Empire
×

The Protestant Moment: Antipopery, the Revolution of 1688–1689, and the Making of an Anglo-American Empire
×
×