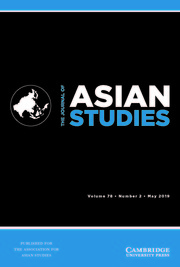 Forum—Anti-Colonialism in Asia: The Centenary of 1919