How We Talk About Race Affects What We Do About Race 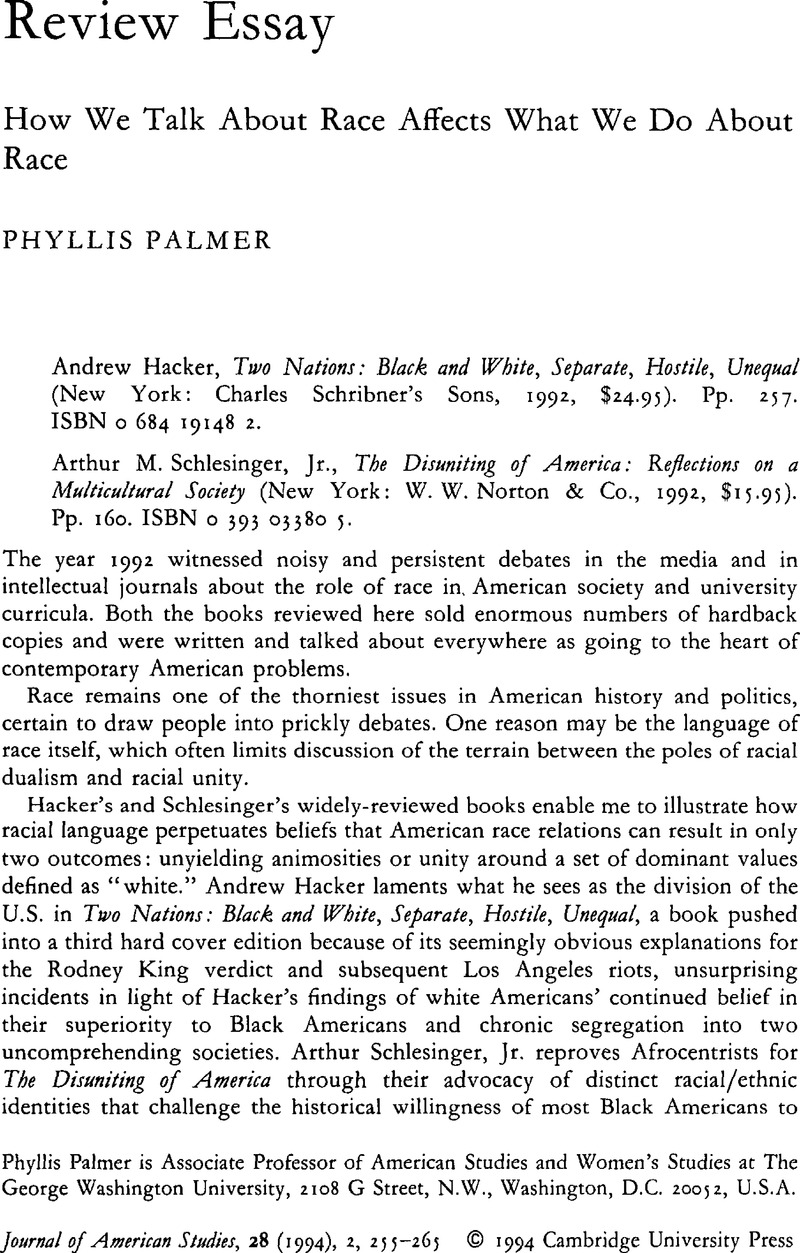 1 Lugones, Maria, “Hablando cara a cara/Speaking Face to Face: An Exploration of Ethnocentric Racism,” in Making Face, Making Soul, ed. Anzaldūa, Gloria (San Francisco: Aunt Lute Foundation, 1991)Google Scholar argues that “The existence of races as the products of racialization presupposes the presence of racism.” (48) Appiah, Kwame Anthony, “Racisms,” Anatomy of Racism, ed. Goldberg, David Theo (Minneapolis: University of Minnesota Press, 1990)Google Scholar argues that one can logically be a racialist without being a racist, though he describes no historical or cultural examples: pp. 4–6.

2 Brace, C. Loring, “The Roots of the Race Concept in American Physical Anthropology,” A History of American Physical Anthropology, 1930–1980, ed. Spencer, Frank (New York: Academic Press, Inc., 1982)Google Scholar. Brace describes how physical anthropology has never incorporated the shifts in evolutionary thought of the 1930s that abandoned notions of racial groups as a biologically meaningful way to categorize humans. He states that “more recent treatments of race in American physical anthropology …have focused on the testable aspects of human biology, but in the end, they generally conclude with a named list of human ‘races’ assigned to various geographic and local regions. The connection between the biology discussed and the races named at the end is never clearly spelled out, and in fact the attentive reader cannot discover, from the information presented, just how the racial classification was constructed — other than the fact that this just seems to be the way anthropologists have always done things” (p. 2,).

3 Alexis de Tocqueville published the mammoth Democracy in America in two parts in 1835 and 1840, a book filled with acute observations of America assessed in contrast to the political battles over republicanism currently raging in de Tocqueville's native France. The book's size and pith have made it something of a Bible to scholars of American politics and society. Like the Bible, it provides phrases, often quoted out of context, to support almost any interpretation of America. Hacker's most questionable misuse is transforming de Tocqueville's analysis of a racially trifurcated America into a bifurcated one. His second is lifting words out of context and ignoring that de Tocqueville was considering what would happen when Africans inevitably gained freedom from enslavement and not forecasting American race relations for the next century. Davis, David Brion, “The American Dilemma,” New York Review of Books (16 07 1992)Google Scholar questions Hacker's suggestion “that the fundamental issues have changed little since Tocqueville's time” (p. 13). Davis reminds readers that race has often been used as a synonym for class, thereby implying that black people are poor because of innate inferiority and obscuring the poverty of whites, Latinos, and other groups.

4 Some prominent African-American historians and African-American Studies scholars have complained about Afrocentric scholarship. Literary critic Henry Louis Gates Jr, the new director of Harvard's African-American Studies department, has said “that some of the work being done in the more than 200 Afro-American studies programs around the country is intellectually ‘bogus’ because… they are inventing an African past that never was. ‘You would think that the most urgent issue in Afro-American studies departments today would be the causes of poverty [but instead many think] the most urgent issue is whether Cleopatra was black. This is classic escapism and romanticism.’” (New York Times, Wednesday, 3 06 1992, B7Google Scholar). Gates and most other of these scholars would disagree sharply with Schlesinger, however, about greeting this extremism with a retreat to Anglo-Saxon values and the accompanying sense of the U.S. and its past culture as predominantly the product of “white” peoples.

5 Davidson, Basil, an expert on African politics and history, in The Black Man's Burden: Africa and the Curse of the Nation-State (New York: Times Books, 1992)Google Scholar, arrives at a judgment the opposite of Schlesinger's, that it was the adoption of non-indigenous Western models of state building that disabled Africa from succeeding in the era after the overthrow of colonial regimes that had often destroyed previously-existing and functioning means of governance. To save Africa, Davidson argues, African leaders must create democratic models with indigenous materials.

6 Young, Iris Marion, Justice and the Politics of Difference (Princeton: Princeton University Press, 1990)Google Scholar talks, in Chapter 5, about “the scaling of bodies” to indicate how theorists defined and graded different shapes, colors, ages, abilities, sexualities, etc. of human beings on a scale of value and ability to attain the duties and rights of citizenship. Montagu, Ashley, Man's Most Dangerous Myth: The Fallacy of Race, offers a brief history of the taxonomic innovations of the late 18th century that ranked groups by their capacities for full humanity: (New York: Oxford University Press, 4th ed., 1974)Google Scholar.

8 Young, , Justice and the Politics of Difference, Chapter 8, “City Life and Difference.”Google Scholar

9 Thomas, R. Roosevelt Jr, Beyond Race and Gender: Unleashing the Power of Your Total Work Force by Managing Diversity (New York: American Management Association, 1991)Google Scholar is written by one of the central leaders in this change to describe his experiences as director of a non-profit consulting institute at Morehouse College that has worked with many Fortune 500 companies. Thomas, Jr summarizes the human decisions that determine possibilities of overarching loyalties, in this case to the company: “ It is only within the context of a supportive managing diversity environment that unassimilated diversity becomes an asset and offers the opportunity to achieve a competitive gain; otherwise, it is a liability compromising organizational effectiveness” (p. 49).

How We Talk About Race Affects What We Do About Race
×

How We Talk About Race Affects What We Do About Race
×

How We Talk About Race Affects What We Do About Race
×
×