The Responsibility of the Donor for Breach 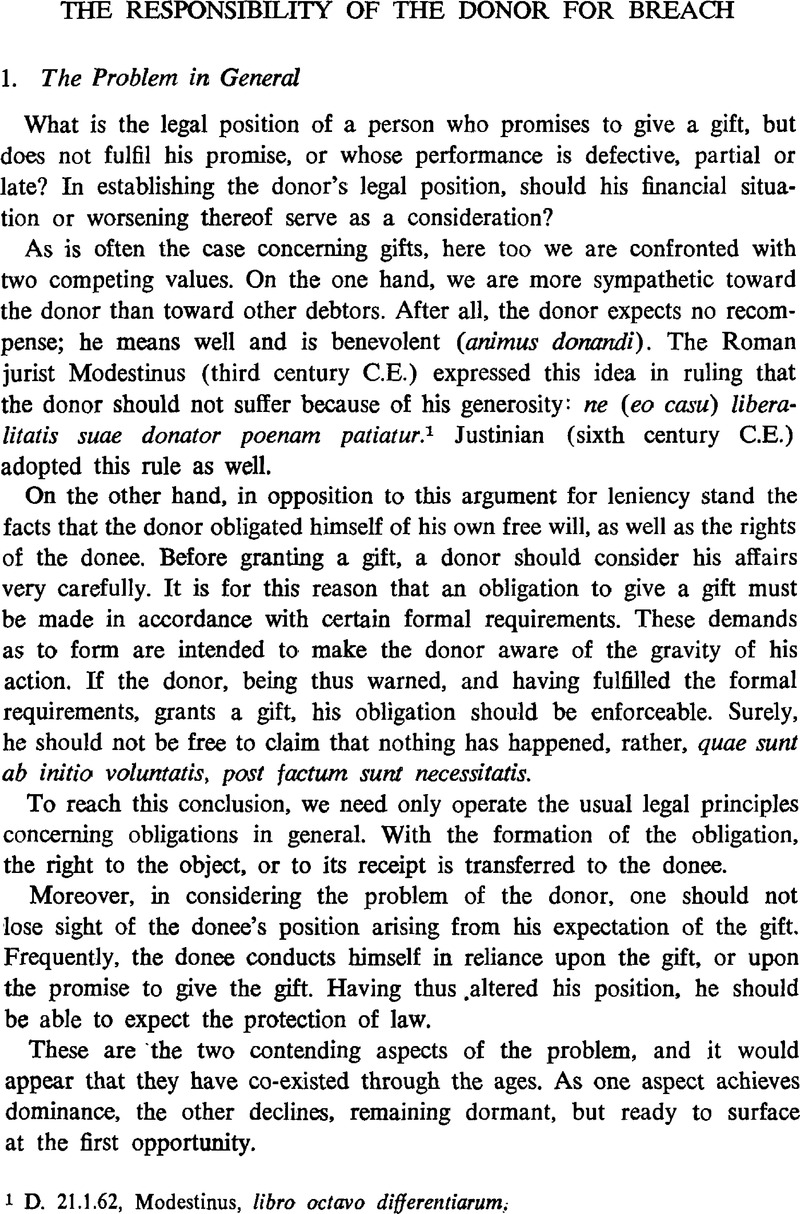 COPYRIGHT: © Cambridge University Press and The Faculty of Law, The Hebrew University of Jerusalem 1983

7 Windsheid, , Pandette, 2.2 pp. 23 ff. For French law, see Aubry and Rau, Droit Civil Français (Civil Law Translation), Cf. Testamentary Successions and Gratuitous Dispositions (St. Paul, Minn., 1969) Vol. X, p. 392: “Regarding the debts of the donor, the donee is personally and directly bound only when he has undertaken to pay them pursuant to an express or implied agreement in the act of donation”.

12 Today the tendency is to unify the two previously opposing theories: the Willenstheorie and the Vorstellungstheorie, that is, in order to fulfil the requirement of malicious intention (dolus), the co-existence of two elements is needed; voluntariness of deed, and knowledge that the law was being contravened. Therefore there will be no claim of malicious intention as regards a donozr who believes he has a good reason not to perform his promise, or who has made an error of fact or law concerning the existence or the limits of his obligation. See Torrente, A., La donazione, (Milano, 1956) 503.

14 A similar situation exists in the rescission of a guarantee for a future obligation.

16 This is a more simple expression than the term “grave deterioration” that was used in the proposed law. On the question of what would happen if ‘B’ obligates himself to give ‘A’ property as a gift, and as a result of ‘C’V’ interference ‘B’ rescinds on his obligation, see Cohen, N., Interference with Contractual Relations (Tel Aviv, 1982, in Hebrew) 188 ff. In my opinion, as opposed to what is stated in n. 14, ibid., the gift is a bilateral negotium, yet a unilateral contract. See Rabello, The Gift Law, supra, n. 10 at p. 18 ff. The matter is explained well in the judgment of Barak J. in Berkowitz v. Kaliman (1982 (IV) 36 P.D. 57.

17 In the translation of Forrester, J.S., Goren, S., Ilgen, H.M., The German Civil Code (New Jersey, 1975) 80. Compare sec. 250 of the Swiss Code of Obligations: “In the case of a promise of a gift, the donor may revoke the promise and refuse the performance thereof:

1. for the same reasons for which the return of executed gifts can be claimed;

2. if since the date of the promise his financial situation has changed to such an extent that the gift would become an extremely heavy burden on him;

3. if since the date of the promise new or materially heavier family duties have been imposed upon the donor.

The issue of a certificate of unsatisfied claims or the declaration of bankruptcy against the donor invalidate any promise of gift”. The Swiss Federal Code of Obligations transl. by Wettestein, G. (Zurich, 1928). For a comparison with French Law see the comments of P. Esmein, to Aubry-Rau, Droit Civil Français, op. cit., supra n. 7 at p. 387 ff.

“Where the donation is of a sum of money, the Civil Code has not retained the bénéfice de compétence of the Roman law according to which the donor who had contracted an obligation was required to perform only to the extent of his net assets with the privilege of retaining what was necessary for his subsistence. The Code permits only the revocation for cause of ingratitude if the donee refuses subsistence to the donor (Art. 955) [La.C.C. Art. 1560]. However, the decision of the Court of Grenoble of 17 June, 1930, Gaz. Pal., 1930, 2.419, which is questionable in view of the factual situation, holding that there was no true obligation, seems to have been influenced by the bénéfice de compétence concept”.

20 A similar section is found in B.G.B. sec. 521: “[Liability of donor] A donor is responsible only for wilful conduct and gross negligence”. See the commentary in Erman, op. cit., supra n. 19.

28 For the problem in Jewish Law, see Bab. Talmud, Bava Mezia 45b and 49a: “Rabbah bar Bar Ḥanah said in R. Joḥanan's name: If one says to his neighbour, ‘I will make you a gift’, he can retract therefrom. ‘He can [retract]’ — but that is obvious: [Since there had been no legal acquisition] Hence [he must have meant]: He is permitted to withdraw! R. Papa replied: R. Johanan admits in the case of a small gift [that the mere promise involves a breach of faith] because he [the recipient] relies thereon [that he will certainly fulfil his promise; hence he cannot retract without a breach of faith.] But if one promises a large gift, the beneficiary himself does not have full confidence in the promise, and therefore withdrawal is permitted.” (Translation by Epstein, London, 1935, p. 252 ff.) See also Maimonides, Hilchot Zechiah u-matanah; Elon, M., “The Sources and Nature of Jewish Law and its Application in the State of Israel” (1969) 4 Is.L.R. 96 ff.; Landau, L. and Rakover, N., “The Gift Law, 1968” (1969) 4 Is.L.R. 260; Albeck, Sh., “Gift”, in Elon, M. (ed.), The Principles of Jewish Law (Jerusalem, 1975), col. 221 ff.; Albeck, Sh., The Law of Property and Contract in the Talmud (Tel Aviv, 1976, in Hebrew), index, s.v. matanah; Warhaftig, I., The Essence of Contract in Jewish Law (doctoral unpublished thesis, Jerusalem, 1977).

29 In this article we have refrained from considering the question of the donor's liability where the gift is defective or his liability for eviction, as these questions are beyond the score of the present study.

* Head of the Institute for Research in Jewish Law, The Hebrew University of Jerusalem.

The Responsibility of the Donor for Breach