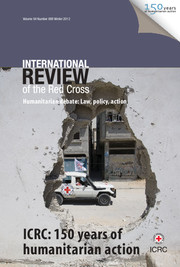 Perspectives on the ICRC

Turning points in the history of the ICRC and the Movement