The right of intervention under the African Union's Constitutive Act: From non-interference to non-intervention 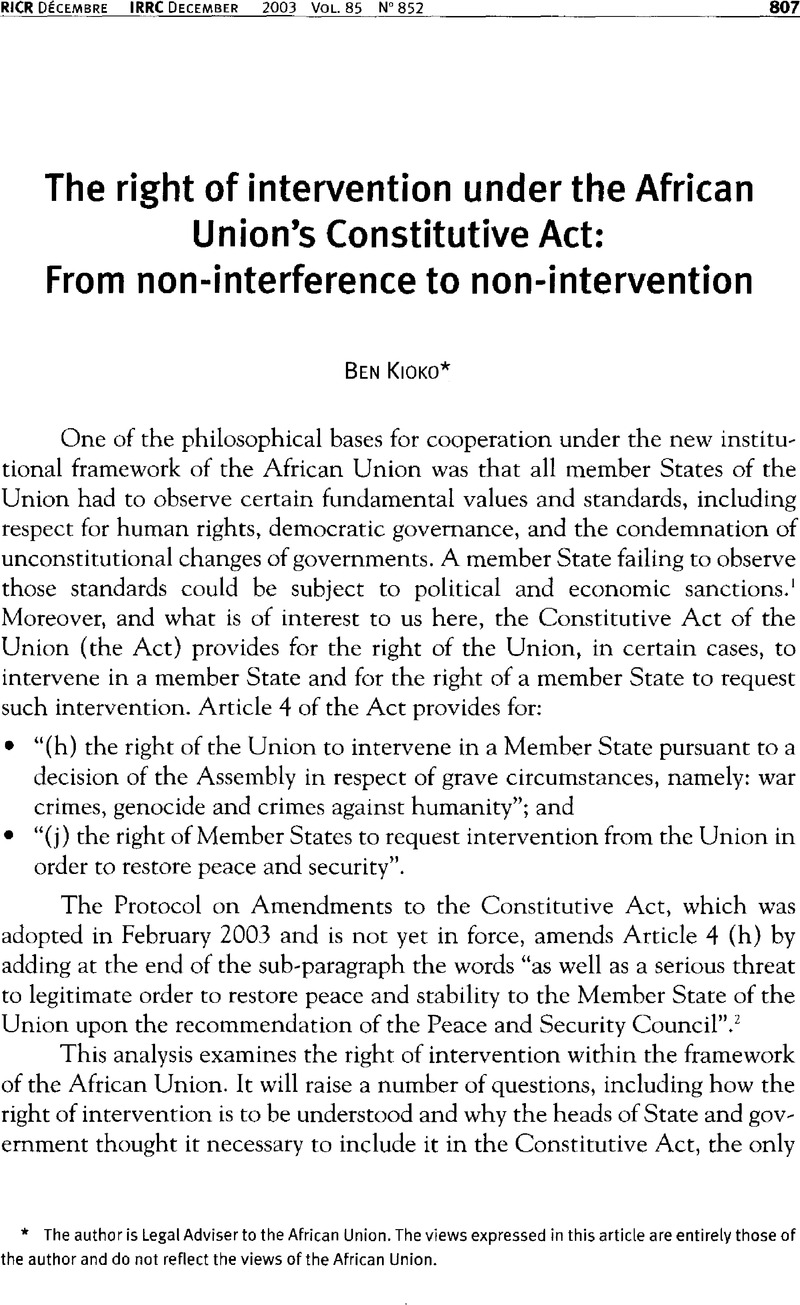 1 Art. 23 (2) of the Constitutive Act provides: “… any Member State that fails to comply with the decisions and policies of the Union may be subjected to (…) sanctions, such as the denial of transport and communications links with other Member States, and other measures of a political and economic nature to be determined by the Assembly.”

2 Art. 4 of the Protocol on Amendments to the Constitutive Act of the African Union, adopted by the 1st Extra-Ordinary Session of the Assembly of the African Union, Addis Ababa (Ethiopia), 3 February 2003. The Protocol shall enter into force thirty days after the deposit of instruments of ratification by a two-thirds majority of the Member States. The Protocol also amends Article 5 of the Constitutive Act to include the Peace and Security Council as one of the organs of the Union.

4 Quoted by Corell, H., (UN Legal Counsel), “To intervene or not: the dilemma that will not go away”, keynote address to the Conference on the Future of Humanitarian Intervention, Duke University 19 April 2001, unpublished. Also see Danish Institute of International Affairs 1999, Humanitarian Intervention: Legal and Political Aspects, submitted to the Minister of Foreign Affairs, Denmark, 7 December 1999 (called the “Danish Institute Report”).

10 Preamble of the Constitutive Act Establishing the African Union, adopted by the OAU Assembly of Heads and Government, Lome (Togo), 11 July 2000, available at <www.africa-union.org>.

11 The difference in approach was characterized as being between those that wanted to run and those who wanted to walk by President Thabo Mbeki in his intervention during the debate at the 4th Extra-Ordinary Session of the Assembly of Heads of State and Government of the Organization of African Unity (OAU), Sirte (Libya), 9 September 1999.

12 The Memorandum (EX/Assembly/2 (I) went on to state: “Taking into account that one of the objectives and principles of the African Union is to promote peace and security of the continent, when the proposal for the establishment of an African defence and security framework comes into being, there will be no need for agreements with non-African States. In any case, the Constitutive Act in article 4 (d) makes it clear that there has to be a common defence policy for the African Union”.

13 The International Panel of Eminent Personalities to Investigate the 1994 Genocide in Rwanda and Surrounding Events (IPEP) was set up by decision of the Council of Ministers of the OAU (CM/Dec.409 (LXVIII)), and endorsed by the Assembly of Heads of State and Government at its 34th Ordinary Session, Ouagadougou, June 1998, at the proposal of President Zenawi of Ethiopia. Its mandate was to “investigate the 1994 genocide in Rwanda and the surrounding events in the Great Lakes Region, as part of efforts made at averting and preventing further widespread conflicts in the… Region”. The OAU requested the panel to “establish the facts about how such a grievous crime was conceived, planned, and executed, to look at the failure to enforce the United Nations Genocide Convention in Rwanda and in the Great Lakes Region, and to recommend measures aimed at redressing the consequences of the action of the genocide and at preventing any possible recurrence of such a crime”. The panel was composed of H.E. Sir Quett Ketumire Masire (Chairperson; former President of Botswana), H.E. General Amadou Toumani Toure (former Head of State of Mali), Lisbet Palme (Chairperson of the Swedish Committee for UNICEF and Expert on the UN Committee on the Rights of the Child), Ellen Johnson-Sirleaf (former Liberian government minister; former Executive Director of the Regional Bureau of Africa of the United Nations Development Programme), Justice P.N. Bhagwati (former Chief Justice of the Supreme Court of India), Senator Hocine Djoudi (former Algerian Ambassador to France and UNESCO, Permanent Representative to the UN), and Ambassador Stephen Lewis (former Ambassador and Permanent Representative of Canada to the UN, former Deputy Executive Director of UNICEF). For more details see: Rwanda: The Preventable Genocide, IPEP, OAU, Addis Ababa, 2000.

15 As fate would have it, the peace agreement between Ethiopia and Eritrea was negotiated and facilitated by the OAU.

17 The 1990 Declaration was adopted by the 29th Ordinary Session of the Assembly of Heads of State and Government of the OAU, Addis Ababa, 9–11 July 1990. It took into account the proposals contained in the Report of the Secretary General on the Fundamental Changes Taking Place in the World and their Implications for Africa: Proposals for an African Response. In the 1990 Declaration, the leaders, noting that the socioeconomic situation remained precarious, expressed their determination, inter alia, to lay a solid foundation for a self-reliant, human-centred and sustainable development on the basis of social justice and collective self-reliance. They noted that the process of socio-economic transformation and integration could not be realized without promoting popular participation of the peoples in the processes of government and development guaranteeing human rights and the rule of law and ensuring the involvement of all, including in particular women and youth in the development efforts. They accordingly recommitted themselves to the further democratization of their societies and to the consolidation of democratic institutions in their countries, as well as to working together towards the speedy resolution of all conflicts on the continent and to making renewed efforts to eradicate the root causes of the refugee problems in Africa. The leaders also reaffirmed their commitment to reviving the ideals of Pan-Africanism and committed themselves on behalf of their governments and peoples to strengthening unity and solidarity among their countries and peoples (paras. 5, 8, 10, 11 and 12).

18 The Cairo Agenda for Action (AHG/Res. 236 (XXXI) was adopted by a Special Session of the Council of Ministers on Economic and Social Issues in African Development held in Cairo in 1994 and was endorsed by the 31st Ordinary Session of the Assembly of Heads of Sate and Government, Addis Ababa, 26–28 June 1995. The leaders recognized and resolved that democracy, good governance, peace and security, stability and justice are among the most essential factors in African socio-economic development. The leaders undertook to ensure, inter alia, the speedy promotion of good governance, characterized by accountability, probity, transparency, equal application of the rule of law and a clear separation of powers, as an objective and a condition for rapid and sustainable development in Africa (p. 6, para. 10).

21 The Protocol to the Treaty Establishing the African Economic Community Relating to the Pan African Parliament, adopted in Sirte, Libya, in March 2001, has received the required number of ratifications and will enter into force on 14 December 2003. The inaugural session of the Pan African Parliament is planned for March 2004. During the first five years the Parliament will have a consultative and advisory role and its members (five per Member State) will be elected or designated by the national parliaments. Thereafter, its members will be elected by universal adult suffrage and it will have full legislative powers (Articles 2–4).

22 The Economic Social and Cultural Council is an organ of the African Union established by Article 5 of the Constitutive Act. It is composed of social and professional groups in Member States (civil society) and has an advisory role to all organs of the Union (Art. 22).

23 Art. 7 of the Constitutive Act and Rule 18 of the Rules of Procedure of the Assembly.

24 Protocol Relating to the Establishment of the Peace and Security Council of the African Union, adopted by the 1st Ordinary Session of the Assembly of the African Union, held in Durban, South Africa on 9 July 2002, available at <www.africa-union.org>. The Preamble to the Protocol notes that no single internal factor has contributed more to the social economic decline of the continent and the suffering of the civilian population than the scourge of conflicts within and between States. The Protocol, which requires ratification by a simple majority of Member States (27), has been ratified by twenty-three Member States as at 10 December 2003. The additional four ratifications will, it is hoped, be received within the next few months, to facilitate election of the members by the Executive Council in March 2004 upon delegation of power by the Assembly of the Union.

38 The sanctions were imposed following the coup d'état against the democratically elected government in that country and the assassination of its President Ndadaye.

40 A. Adebajo, “From Cape to Cairo: Some perspectives on peace and security in Africa”, Seminar paper delivered during the AU Brainstorming Session, held in Addis Ababa, Ethiopia, 25–28 October 2003, p. 5.

International Review of the Red Cross
×
Powered by UNSILO

The right of intervention under the African Union's Constitutive Act: From non-interference to non-intervention

International Review of the Red Cross
×