Issue Theme: Interaction of Depression and Cognition in Older Age 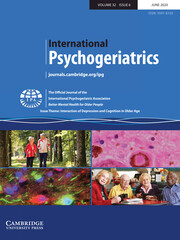