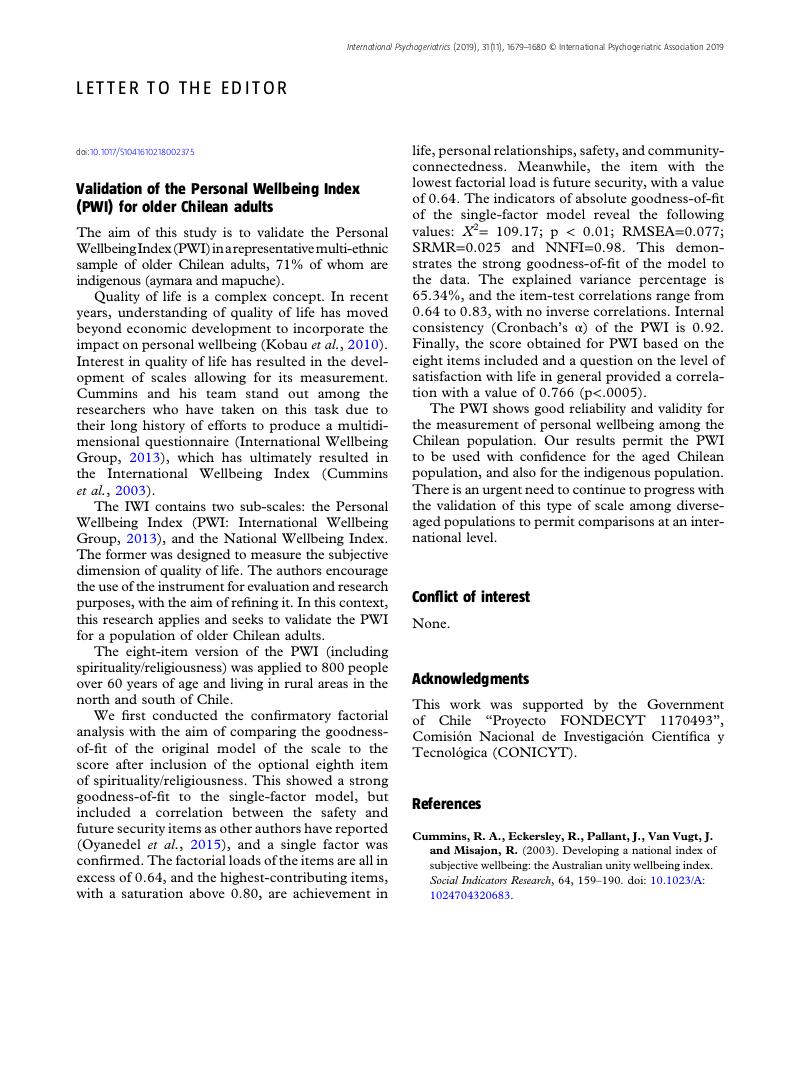 An abstract is not available for this content so a preview has been provided. To view the full text please use the links above to select your preferred format.
Type
Letter to the Editor
Information
International Psychogeriatrics , Volume 31 , Issue 11: Issue Theme: Psychiatric Morbidity in Exceptionally Old People , November 2019 , pp. 1679 - 1680
DOI: https://doi.org/10.1017/S1041610218002375[Opens in a new window]
Copyright
© International Psychogeriatric Association 2019

The aim of this study is to validate the Personal Wellbeing Index (PWI) in a representative multi-ethnic sample of older Chilean adults, 71% of whom are indigenous (aymara and mapuche).

Quality of life is a complex concept. In recent years, understanding of quality of life has moved beyond economic development to incorporate the impact on personal wellbeing (Kobau et al., Reference Kobau, Sniezek, Zack, Lucas and Burns2010). Interest in quality of life has resulted in the development of scales allowing for its measurement. Cummins and his team stand out among the researchers who have taken on this task due to their long history of efforts to produce a multidimensional questionnaire (International Wellbeing Group, 2013), which has ultimately resulted in the International Wellbeing Index (Cummins et al., Reference Cummins, Eckersley, Pallant, Van Vugt and Misajon2003).

The IWI contains two sub-scales: the Personal Wellbeing Index (PWI: International Wellbeing Group, 2013), and the National Wellbeing Index. The former was designed to measure the subjective dimension of quality of life. The authors encourage the use of the instrument for evaluation and research purposes, with the aim of refining it. In this context, this research applies and seeks to validate the PWI for a population of older Chilean adults.

The eight-item version of the PWI (including spirituality/religiousness) was applied to 800 people over 60 years of age and living in rural areas in the north and south of Chile.

We first conducted the confirmatory factorial analysis with the aim of comparing the goodness-of-fit of the original model of the scale to the score after inclusion of the optional eighth item of spirituality/religiousness. This showed a strong goodness-of-fit to the single-factor model, but included a correlation between the safety and future security items as other authors have reported (Oyanedel et al., Reference Oyanedel, Vargas, Mella and Páez2015), and a single factor was confirmed. The factorial loads of the items are all in excess of 0.64, and the highest-contributing items, with a saturation above 0.80, are achievement in life, personal relationships, safety, and community-connectedness. Meanwhile, the item with the lowest factorial load is future security, with a value of 0.64. The indicators of absolute goodness-of-fit of the single-factor model reveal the following values: X 2= 109.17; p < 0.01; RMSEA=0.077; SRMR=0.025 and NNFI=0.98. This demonstrates the strong goodness-of-fit of the model to the data. The explained variance percentage is 65.34%, and the item-test correlations range from 0.64 to 0.83, with no inverse correlations. Internal consistency (Cronbach’s α) of the PWI is 0.92. Finally, the score obtained for PWI based on the eight items included and a question on the level of satisfaction with life in general provided a correlation with a value of 0.766 (p<.0005).

The PWI shows good reliability and validity for the measurement of personal wellbeing among the Chilean population. Our results permit the PWI to be used with confidence for the aged Chilean population, and also for the indigenous population. There is an urgent need to continue to progress with the validation of this type of scale among diverse-aged populations to permit comparisons at an international level.