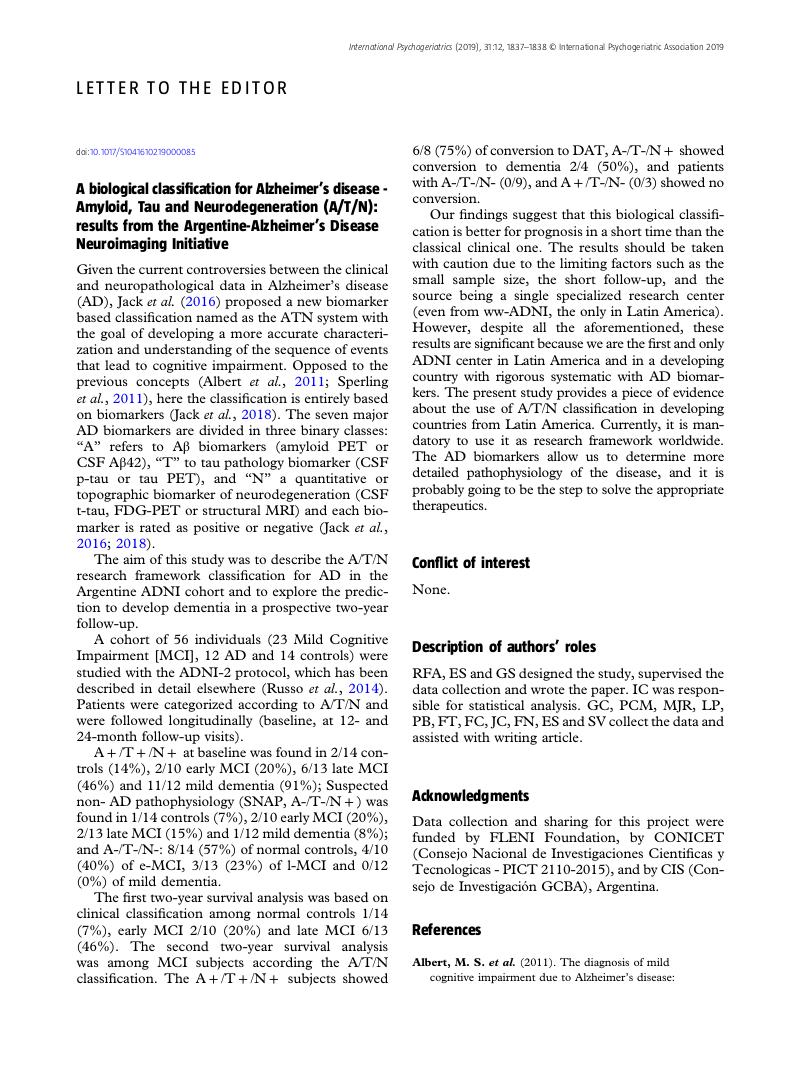 An abstract is not available for this content so a preview has been provided. To view the full text please use the links above to select your preferred format.
Type
Letter to the Editor
Information
International Psychogeriatrics , Volume 31 , Issue 12: Issue Theme: Assessment of Cognitive Impairment in East Asia , December 2019 , pp. 1837 - 1838
DOI: https://doi.org/10.1017/S1041610219000085[Opens in a new window]
Copyright
© International Psychogeriatric Association 2019

The aim of this study was to describe the A/T/N research framework classification for AD in the Argentine ADNI cohort and to explore the prediction to develop dementia in a prospective two-year follow-up.

A cohort of 56 individuals (23 Mild Cognitive Impairment [MCI], 12 AD and 14 controls) were studied with the ADNI-2 protocol, which has been described in detail elsewhere (Russo et al., Reference Russo2014). Patients were categorized according to A/T/N and were followed longitudinally (baseline, at 12- and 24-month follow-up visits).

Our findings suggest that this biological classification is better for prognosis in a short time than the classical clinical one. The results should be taken with caution due to the limiting factors such as the small sample size, the short follow-up, and the source being a single specialized research center (even from ww-ADNI, the only in Latin America). However, despite all the aforementioned, these results are significant because we are the first and only ADNI center in Latin America and in a developing country with rigorous systematic with AD biomarkers. The present study provides a piece of evidence about the use of A/T/N classification in developing countries from Latin America. Currently, it is mandatory to use it as research framework worldwide. The AD biomarkers allow us to determine more detailed pathophysiology of the disease, and it is probably going to be the step to solve the appropriate therapeutics.