United Nations Compensation Commission: Recommendations Made by the Panel of Commissioners Concerning Individual Claims for Serious Injury or Death (Category "B" Claims) 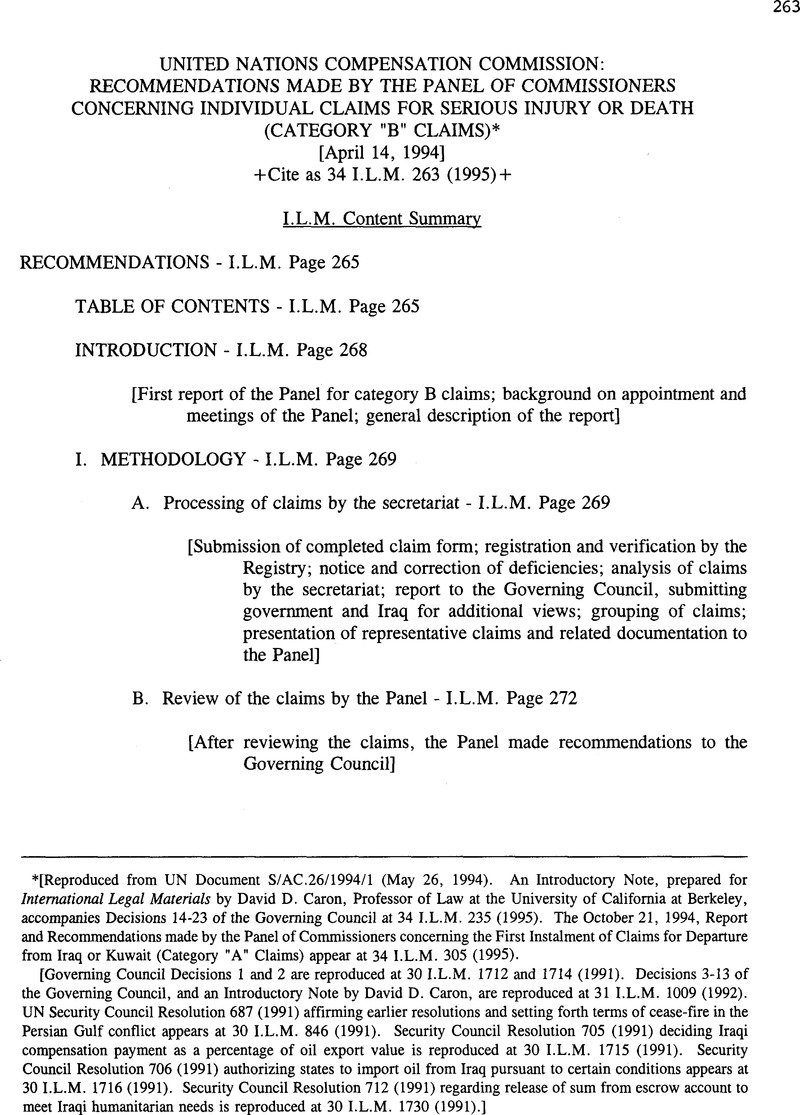 [Reproduced from UN Document S/AC.26/1994/1 (May 26, 1994). An Introductory Note, prepared for International Legal Materials by David D. Caron, Professor of Law at the University of California at Berkeley, accompanies Decisions 14-23 of the Governing Council at 34 I.L.M. 235 (1995). The October 21, 1994, Report and Recommendations made by the Panel of Commissioners concerning the First Instalment of Claims for Departure from Iraq or Kuwait (Category "A" Claims) appear at 34 I.L.M. 305 (1995).

[Reproduced from UN Document S/AC.26/1994/1 (May 26, 1994). An Introductory Note, prepared for International Legal Materials by David D. Caron, Professor of Law at the University of California at Berkeley, accompanies Decisions 14-23 of the Governing Council at 34 I.L.M. 235 (1995). The October 21, 1994, Report and Recommendations made by the Panel of Commissioners concerning the First Instalment of Claims for Departure from Iraq or Kuwait (Category "A" Claims) appear at 34 I.L.M. 305 (1995).

1 Article 37(e) requires that “[e]ach Panel will report inwriting through the Executive Secretary to the Governing Council on the claims received and the amount recommended to be allocated to each Government or other entity for each consolidated claim. Each report will briefly explain the reasons for the recommendations and, to the extent practicable within the time-limit, contain a breakdown of the recommendations in respect of individual claims within each consolidated claim.“

6 In accordance with Decision 1, para. 19, the Governing Council may request an appropriate person, authority or body to submit claims on behalf of persons who are not in a position to have their claims submitted by a Government.

8 Rules, article 16, para. 1: “The Executive Secretary will make periodic reports to the Governing Council concerning claims received. These reports shall be made as frequently as required to inform the Council of the Commission's case load but not less than quarterly. The reports shall indicate: a) Governments, international organizations or other eligible parties that have submitted claims; b) the categories of claims submitted; c) the number of claimants in each consolidated claim; d) the total amount of compensation sought in each consolidated claim. In addition, each report may indicate significant legal and factual issues, raised by the claims, if any.“

9 Rules, article 16, para. 3: “Within 30 days in case of claims in Categories A, B, , C; and 90 days in case of claims in other categories, of the date of the circulation of the Executive Secretary's report, the Government of Iraq as well as Governments and international organizations that have submitted claims, may present their additional information and views concerning the report to the Executive Secretary for transmission to panels of Commissioners in accordance with Article 32. There shall be no extensions of the time limits specified in this paragraph.“

10 When processing category “C” or “D” claims, the secretariat will also run a computer check to verify whether a person who is claiming for personal injury or death on Forms “C” or “D”, has also claimed for interim relief on Form “B”.

17 Report to the Secretary-General by a United Nations mission, led by Mr. Abdulrahim A. Farah, former Under-Secretary-General, Assessing the Scope and Nature of Damage Inflicted on Kuwait's Infrastructure During the Iraqi Occupation of the Country from 2 August 1990 to 27 February 1991 (S/22535, dated 22 April 1991), (the Farah Report); Report on the Situation of Human Rights in Occupied Kuwait, prepared by Mr. Walter Kālin, Special Rapporteur of the United Nations Human Rights Commission (E/CN/1992/26 dated 16 January 1992), (the Kālin Report).

21 Article 14, para. l(c) states that a Government submitting claims must affirm “that, to the best of the information available to it, the claimants are its nationals or residents, and that it has no reason to believe that the information stated in the claims is incorrect.“

22 Decision 12, para. 2: “When the Executive Secretary determines that the processing of all remaining claims before the panels of Commissioners is likely to take no more than one year to complete, he should so notify the Governing Council. The Governing Council should thereupon establish the final time limit for the submission of claims covered by paras. l(a) and 1(b) of this decision. The Governing Council should establish the final time limit at its next meeting after receiving such notification and should allow at least three additional months from the date of its decision for the filing of the claims.“

24 According to the medical expert, a delivery is generally considered premature from the end of the 26th week until the end of the 32nd week of pregnancy.

34 Kālin Report, para. 115: “According to interviews conducted by the Special Rapporteur, the Farah Mission and the Kuwaiti Association for the Defence of Victims of War, torture was widespread An indication of the widespread use of torture was given by Dr. Al-Hammadi's two studies. Among the 100 former detainees repatriated from Iraq whose condition was analyzed in the first study, 7 6 claimed to have been subjected to some kind of torture or cruel, inhuman or degrading treatment, and 2 61 out of 33 0 former detainees examined in the second study reported having been subjected to physical or psychological torture or abuse.” andpara.117: “(i)n numerous cases, torture and inhuman, cruel or degrading treatment resulted in a permanent physical or mental damage. Medical and psychiatric reports made available to the Special Rapporteur showed that former victims of torture still suffer from, inter alia, partial paralysis, pains,- severe forms of depression, sleep disturbances and nightmares, severe anxiety, partial amnesia and inability to concentrate, often requiring medical and psychological care.“

35 Kālin Report, para. 182: ”…women particularly were victims of rape. According to the information received and interviews conducted during the Special Rapporteur's visits to Kuwait, the following categories of cases of rape can be distinguished: Rape of foreign women by Iraqi soldiers during the first two weeks of the occupation. Most, but not all, of the victims were young women of Asian origin. Rape of women during house searches by Iraqi army personnel, sometimes in front of close relatives… Other women were reportedly raped when abducted for that purpose from check-points or from the street.Finally, rape was used as a method of torture….“

36 As was stated by the Inter-American Court of Human Rights, Velasquez Rodriguez Case, Judgment of 2 9 July 1988, para 130: ”…direct evidence, whether testimonial or documentary, is not the only type of evidence that may be legitimately considered in reaching a decision. Circumstantial evidence, indicia, and presumptions may be considered, so long as they lead to conclusions consistent with the facts.“

37 Kālin Report, para. 204: “The Special Rapporteur was informed by doctors in Kuwait that after February 1991, there had been a certain increase of health problems, especially of children, elderly or sick persons, which might be attributed to environmental pollution caused by burning oil wells. Such problems were described as ‘limited', although the increase of cases of respiratory problems was substantial.“

United Nations Compensation Commission: Recommendations Made by the Panel of Commissioners Concerning Individual Claims for Serious Injury or Death (Category "B" Claims)