International Tribunal for the Law of the Sea: Delimitation of the Maritime Boundary between Bangladesh and Myanmar in the Bay of Bengal (Bangladesh/Myanmar) 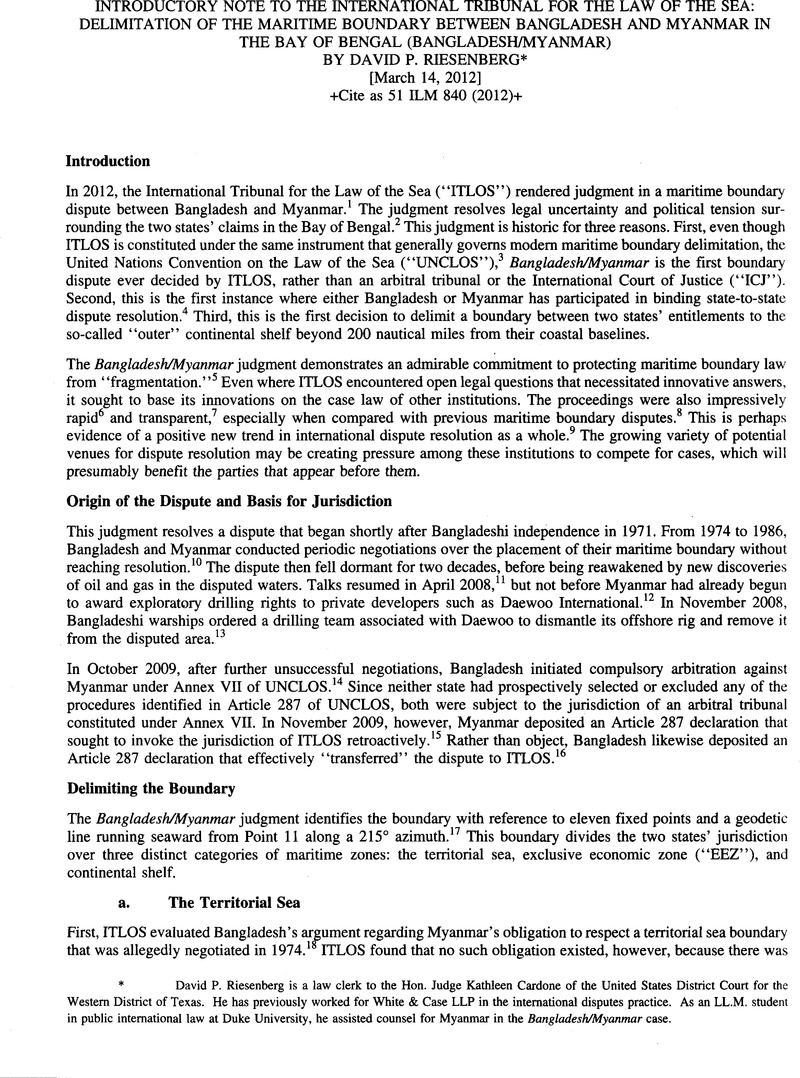 * This text was reproduced and reformatted from the text available at the International Tribunal for the Law of the Sea Web site (visited September 15, 2012), http://www.itlos.org/fileadmin/itlos/documents/cases/case_no_16/l-C16_Judgment_14_02_2012.pdf.

1 Delimitation of the Maritime Boundary Between Bangladesh and Myanmar in the Bay of Bengal (Bangl/Myan.), ITLOS Case No. 16, Judgment (Mar. 14, 2012) [hereinafter Judgment]. All separate opinions, verbatim records, and written pleadings produced during the case are available on the ITLOS website. Case No. 16, ITLOS, http://www.itlos.org/in-dex.php?id=108 (last visited Oct. 21, 2012).

2 Wim respect to its western maritime boundary in the Bay of Bengal, Bangladesh is still engaged in arbitration with India before a five-member tribunal constituted under the auspices of the Permanent Court of Arbitration. Three of the arbitrators in that case also participated as judges in the Bangladesh/Myanmar decision. Many of the same advocates have also represented the parties in both cases. See Bangladesh v. India, Perm. Ct. Arb. (Oct. 8, 2009), http://www.pca-cpa.org/showpage.asp?pag_id=1376 (last visited Oct. 21, 2012).

5 Recognizing the “danger of fragmentation” posed by the proliferation of international tribunals with overlapping substantive competencies, several of the individual judges’ declarations and separate opinions explicitly addressed the need for ITLOS and other institutions “to harmonize their jurisprudence” to ensure clarity in the law. See, e.g., Judgment, supra note 1, Declaration of Judge Trêves, ¶ 2; id. Declaration of Judge Wolfram, at 2; id. Joint Declaration of Judges Nelson, Chandrasekhara Rao & Cot, at 1-2.

6 From the institution of proceedings in December 2009 until the rendering of the final judgment in March 2012, the dispute resolution process took only twenty-seven months. See Judgment, supra note 1, ¶ 1.

7 The video recordings of the full hearings were made available in real time on the ITLOS website and are still available for viewing. Case No. 16, ITLOS, http://www.itlos.org/in-dex.php?id=172 (last visited Oct. 21, 2012).

8 In addition to the professionalism demonstrated by ITLOS, one reason for the relative speed of proceedings in Bangladesh/Myanmar may have been that this case did not simultaneously address any dispute over territorial sovereignty. Proceedings in Qatar v. Bahrain, for example, involved disputed territory and lasted ten years. See Maritime Delimitation and Territorial Questions (Qatar v. Bahr.), Merits, 2001 I.C.J. 40 (Mar. 16), 40 I.L.M. 847 (2001). Proceedings in the Nicaragua v. Colombia dispute lasted eleven years. See Territorial and Maritime Dispute (Nicar. v. Colom.), Merits (Nov. 19, 2012), http://www.icj-cij.org/docket/files/124/17164.pdf.

9 For example, the legal proceedings in the Abyei Arbitration took only one year, and the written and oral pleadings were also made available in real time on the website of the Permanent Court of Arbitration. The Government of Sudan / The Sudan People’s Liberation Movement/Army (Abyei Arb.), Perm. Ct. Arb. (July 22, 2009), http://www.pca-cpa.org/showpage.asp?pag_id=1306 (last visited Oct. 21, 2012).

16 Id. ¶¶ 1-5. Judge Trêves observed that several prior cases before ITLOS had also been initiated under compulsory jurisdiction and then “transferred” by mutual consent. Id. Declaration of Judge Trêves, ¶¶ 6-10. In such cases, Judge Trêves noted, it is uncertain whether the second tribunal’s jurisdiction is properly considered compulsory or consensual. This question could have legal consequences where parties to a dispute seek to raise issues that are excluded from a tribunal’s compulsory jurisdiction under Articles 297 and 298 of UNCLOS. Because neither Bangladesh nor Myanmar raised any such issues in this case, however, ITLOS did not address the question. See id. ¶¶ 10-12.

23 Id. ¶¶ 146-64. As Judge Wolfram observed, the coastal baseline around St. Martin’s Island was used to construct the equidistance line in the territorial sea, but ignored in the delimitation of the EEZ and continental shelf. In Judge Wolfram’s view, the judgment did not provide sufficiently “detailed and in-depth reasoning” for this crucial difference. Id. Declaration of Judge Wolfram, at 3-4.

28 See id. ¶¶ 233, 238-40. Several of the judges strongly emphasized the need to adhere to this three-stage methodology unless “there are compelling reasons that make this unfeasible on objective geographical or geophysical grounds, such as the instability of the coastline ....” See id. Joint Declaration of Judges Nelson, Chandrasekhara Rao & Cot, at 1-2; Joint Declaration of Judges ad hoc Mensah & Oxman, ¶ 6. Judge Gao and Judge Lucky, however, argued that the angle-bisector method would have been more appropriate in this case. Id. Separate Opinion of Judge Gao, ¶¶ 59-72; id. Dissenting Opinion of Judge Lucky, at 49-54.

29 ITLOS did not use St. Martin’s Island in the construction of the provisional equidistance line during delimitation of the EEZ and continental shelf. Judgment, supra note 1, ¶ 265. Judge Wolfram criticized the judgment’s reasoning, though not the result. Id. Declaration of Judge Wolfram, at 3-4. Judge Gao, by contrast, argued tìiat St. Martin’s Island should have been given “half effect” in me construction of the equidistance line. Id. Separate Opinion of Judge Gao, ¶ 82.

31 Id. ¶¶ 294-97. By contrast, ITLOS held that the presence of St. Martin’s Island and the geomorphological effects of the Bengal depositional system were not factors necessitating an adjustment of the boundary. Id. ¶¶ 318-19, 322.

32 Id. ¶¶ 329, 334, 338-40. Both Judge Wolfram and Judge Cot criticized the judgment’s failure to provide sufficient reasons to support the deflection of the boundary along the 215° azimuth. Id. Declaration of Judge Wolfram, at 5-6; id. Separate Opinion of Judge Cot, at 12-15.

38 Id. ¶¶ 386-92. As the judgment explains, the Rules of Procedure of the CLCS require it to stay its own proceedings in all “cases where a land or maritime dispute exists.” Id. ¶ 386. Accordingly, if both ITLOS and the CLCS were to refrain from acting because the other had not yet acted, the result would be an impasse leaving both states “unable to benefit fully from their rights over the continental shelf.” Id. ¶ 392.

50 Id. ¶¶ 474-76. In his dissent, Judge Lucky argued that the grey area should not be bifurcated, but allocated entirely to Bangladesh. Id. Dissenting Opinion of Judge Lucky, at 55-60.

55 See Elferink, supra note 45, at 144, 150-52, 157 (describing “objections” regarding the “delimitation along a parallel [of latitude] between Peru and Chile” in a publication written approximately a decade before Peru challenged the allegedly negotiated boundary before the ICJ).

International Tribunal for the Law of the Sea: Delimitation of the Maritime Boundary between Bangladesh and Myanmar in the Bay of Bengal (Bangladesh/Myanmar)