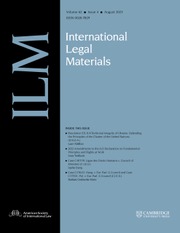 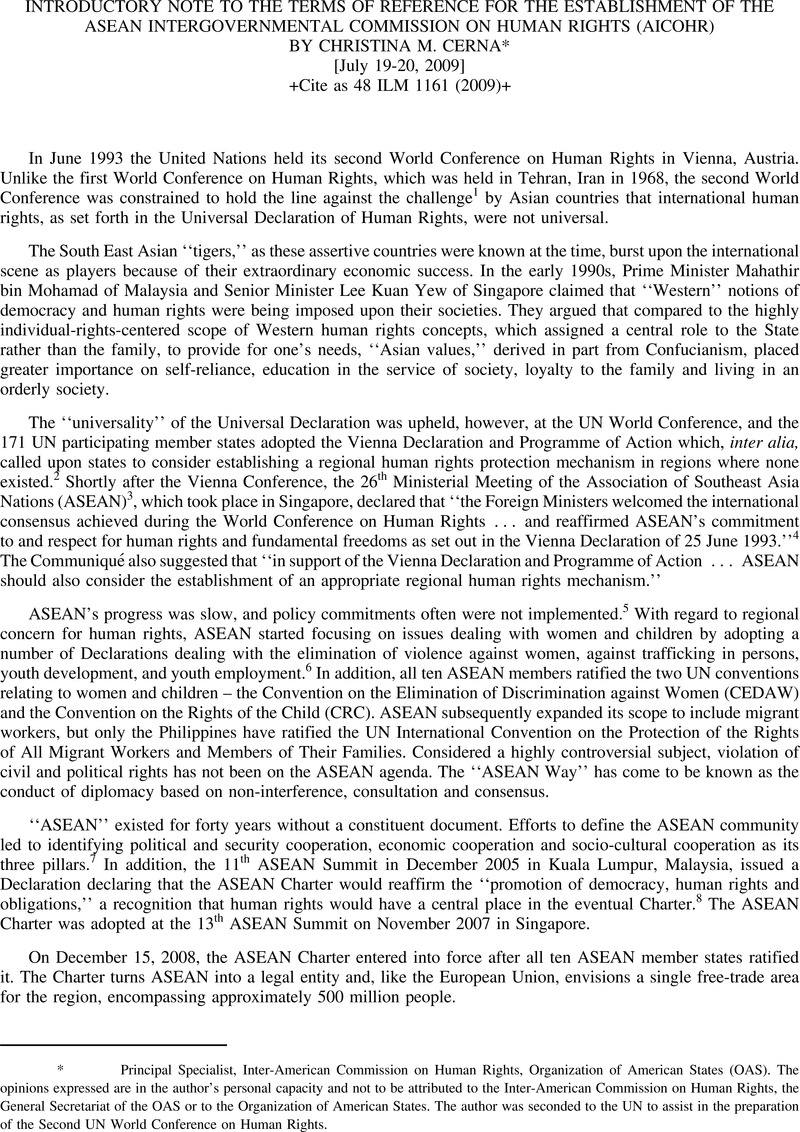 * This text was reproduced and reformatted from the text available at the ASEAN website (visited October 1, 2009) <http://www.asean.org/DOC-TOR-AHRB.pdf=.

1 Bangkok Declaration, para. 8, Aug. 8, 1967, available at http://www.asean.org/1212.htm (the Declaration is the product of the Asian Preparatory Committee for the World Conference, stated that participants ‘‘[r]ecognize that while human rights are universal in nature, they must be considered in the context of a dynamic and evolving process of international normsetting, bearing in mind the significance of national and regional particularities and various historical, cultural and religious backgrounds’’).

2 Vienna Declaration and Programme of Action, para. 37, U.N. Doc. A/CONF.157/23, July 12, 1993, available at http://www2.ohchr.org/english/law/pdf/vienna.pdf. (‘‘Regional arrangements play a fundamental role in promoting and protecting human rights. They should reinforce universal human rights standards, as contained in international human rights instruments, and their protection. The World Conference on Human Rights endorses efforts under way to strengthen these arrangements and to increase their effectiveness, while at the same time stressing the importance of cooperation with the United Nations human rights activities. The World Conference on Human Rights reiterates the need to consider the possibility of establishing regional and subregional arrangements for the promotion and protection of human rights where they do not already exist’’).

5 It is often noted that because of the policy of seeking consensus (the so-called ‘‘ASEAN Way’’ infra), only thirty percent of agreements made by ASEAN are implemented.

6 The Asian financial crisis in 1997 can be considered the beginning of the process of building an ASEAN community. In many ways, ASEAN showed itself unable to react to the crisis, and it was left to international institutions, such as the International Monetary Fund (IMF), to step in and offer rescue packages. ASEAN realized that it would have to reform itself in a newly globalised world to effectively address transnational issues and thus remain relevant. These lessons were confirmed in the subsequent years, as the region increasingly faced challenges of a transnational nature. There were transnational environmental problems with strong regional impact, such as the 1997 haze from forest fires in Indonesia, where the health of seventy million people was jeopardized and led to an estimated cost of US$ 4.5 billion. There was the threat of international terrorism, highlighted by the October 2002 Bali bombings which killed over 200 people. There were transnational health concerns, with the SARS epidemic first appearing in November 2002 in China and quickly becoming a regional concern for Southeast Asia. There were natural disasters, such as the Indian Ocean Tsunami on December 26, 2004, which killed at least 200,000 people, making it one of the deadliest natural disasters in modern history. These problems demanded an effective regional response, and the leaders of South-East Asia realized the need to reform and reinvent ASEAN.

7 The 1997 ‘‘ASEAN Vision 2020’’ Declaration set the goal of creating a ‘‘community of caring societies’’ with ‘‘focus on the welfare and dignity of the human person and the good of the community.’’ The 2003 Bali Concord II, initiated during Indonesia’s time as Chair of ASEAN, gave a coherent structure to the ASEAN Vision 2020, mapping out for the first time the creation of three pillars for an ASEAN Community: an ASEAN Security Community, an ASEAN Economic Community and an ASEAN Socio-Cultural Community. By February 2009, ASEAN had adopted blueprints for the three communities, which today together constitute the roadmap for an ASEAN Community from 2009-2015. Contained in the Socio-Cultural and Political-Security Blueprints are commitments to work towards the establishment of an ASEAN commission on the promotion and protection of the rights of women and children and the development of an ASEAN instrument on the protection and promotion of the rights of migrant workers. The establishment of an ASEAN human rights body is mentioned under the Political Security pillar.

8 See the Kuala Lumpur Declaration on the Establishment of the ASEAN Charter, Dec. 12, 2005, available at http://www.aseansec.org/18030.htm.

12 The author was privileged to serve as a consultant to the High Level Panel on the Terms of Reference for the ASEAN Human Rights Body organized by the OHCHR South-East Asia Regional Office in Bangkok, Thailand.