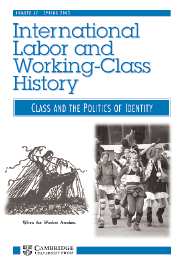 Scholarly Controversy: Class and the Politics of Identity