Labor Migration to the Middle East 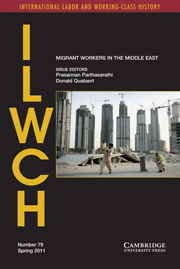 Migrant Workers in the Middle East