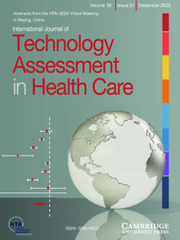 Objectives: The aim of this study was to explore factors that influenced decision making in the assessment of new health technology in Korea.

Methods: We analyzed the decision-making results of the Committee for New Health Technology Assessment (CnHTA) on fifty-three new nondrug health technologies in Korea from July 2007 to December 2010. The scope of the committee was mainly limited to safety and efficacy/effectiveness, and every decision was based on a systematic review of the literature. The committee was composed of healthcare professionals, policy makers, lawyers, and representatives from nongovernmental organizations. Decisions made on therapeutic interventions were included, while those on diagnostic procedures were excluded.

Conclusions: This qualitative analysis of past decision-making results provided us with clues on the values that decision makers on the Korean CnHTA considered in terms of safety and effectiveness. These findings will help us develop appraisal guidelines and enhance the objectivity of decision-making processes in Korea.