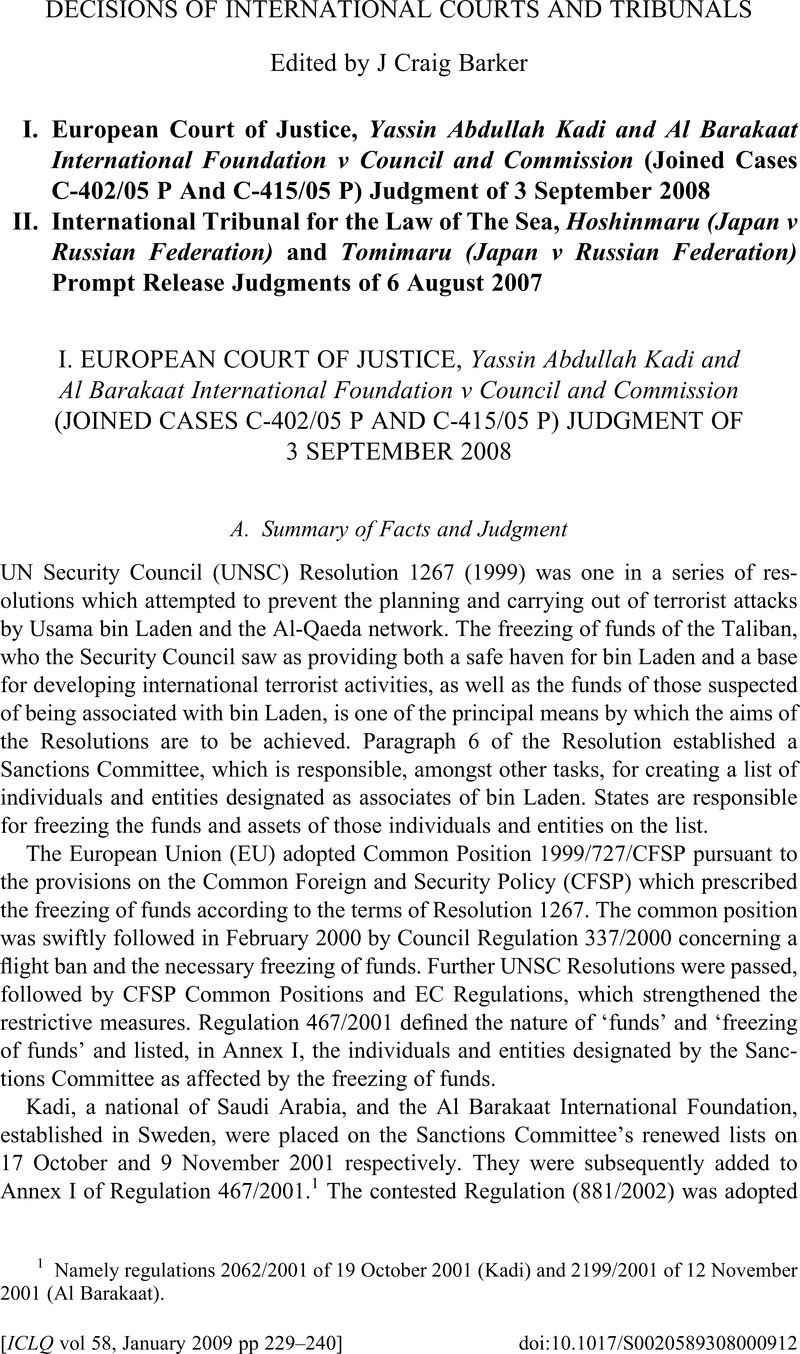 3 ‘If action by the Community should prove necessary to attain, in the course of the operation of the common market, one of the objectives of the Community, and this Treaty has not provided the necessary powers, the Council shall, acting unanimously on a proposal from the Commission and after consulting the European Parliament, take the appropriate measures’.

41 Article 300(7) EC Treaty: ‘Agreements concluded under the conditions set out in this Article shall be binding on the institutions of the Community and on Member States’.

42 Article 307 EC Treaty: ‘The rights and obligations arising from agreements concluded before 1 January 1958 or, for acceding States, before the date of their accession, between one or more Member States on the one hand, and one or more third countries on the other, shall not be affected by the provisions of this Treaty’.

45 Article 25 UN Charter: ‘The Members of the United Nations agree to accept and carry out the decisions of the Security Council in accordance with the present Charter’.

50 Behrami and Saramati v France, Germany and Norway (2007) (Admissibility of Application No 71412/01, and Application No 78166/01). Though the case was decided on the basis that the acts and omissions in question were attributable to the UN and not a state party to the ECHR, the Court did seem to accept the supremacy of Security Council decisions at paras 147–8.

54 Questions of Interpretation and Application of the 1971 Montreal Convention Arising from the Aerial Incident at Lockerbie [1992] ICJ Rep 114, 126.

62 Above (n 49) para 39. In her opinion in Al-Jedda, Baroness Hale said that the right to liberty ‘is qualified but not displaced … the right is qualified only to the extent required or authorised by the resolution’ (para 126). Lord Carswell went further and identified a number of safeguards that would minimise the infringement of the detainee's rights: ‘[T]he compilation of intelligence about such persons which is accurate and reliable as possible, the regular review of the continuing need to detain each person and a system whereby that need and the underlying evidence can be checked and challenged by representatives on behalf of the detained persons, so far as is practicable and consistent with the needs of national security and the safety of other persons’ (para 130).

68 Cf Wessel (n 35) 6: ‘In the face of the reality of these and perhaps future judgments in this field by regional or national courts, the Security Council will need to make this regime not only smart and targeted, but also develop its own comprehensive system for human rights protection’.

73 This can perhaps explain why the three authors of this note, though sharing responsibility for its contents, do not necessarily agree on all aspects of the analysis.