To the Editor —Healthcare personnel frequently use incorrect technique when putting on and removing isolation gowns and gloves. 1 – 3 Such lapses in technique increase the risk for contamination of the skin and clothing of personnel during personal protective equipment (PPE) removal. 1 , 3 Contamination of the hands and wrists may be particularly common due to exposed skin at the wrist or incorrect technique during glove removal. 1 , 3 , 4 In surgical settings, the gown–glove interface has also been described as the weakest point in the gown and glove barrier system. 5 , 6 In studies simulating removal of contaminated gloves, education to improve technique reduced but did not eliminate hand and wrist contamination. 1 , 4 Thus, improvements in PPE design to reduce the risk for contamination are needed.

We hypothesized that gowns and gloves designed to provide continuous coverage of the wrist and hand would reduce contamination during PPE removal. To test this hypothesis, we developed a seamless PPE prototype in which adhesive material on the outer sleeve of the gown at the wrist attaches to the inner cuff of the gloves, providing continuous coverage of the wrist and hand. This design prevents exposure of skin and requires that gloves be peeled off as the gown is removed. Here, we report the results of a pilot study to determine whether the seamless PPE design reduces hand and wrist self-contamination in comparison to standard gowns and gloves.

Healthcare personnel were randomized to perform simulations of contaminated glove removal using either standard or prototype seamless PPE. To simulate contamination, bacteriophage MS2 15597-B1 (American Type Culture Collection, VA) a nonpathogenic, nonenveloped RNA virus and fluorescent lotion were used as previously described. 1 Gloved hands were inoculated with 0.5 mL phosphate-buffered saline (PBS) containing 1010 plaque-forming units of MS2 and 0.5 mL fluorescent lotion and the solutions were rubbed over the gloved hands until dry. Participants removed their gloves and gowns in their usual manner and hand and wrist skin contamination with the fluorescent lotion was assessed using a black light (Ultra Light UV1 by Grizzly Gear, SCS Direct, Trumball, CT). Participants then wiped both hands and wrists with a sterile, pre-moistened 4×4 gauze pad that was placed into a sterile container containing 10 mL PBS and mixed in a vortex mixer for 1 minute to elute the bacteriophage. Aliquots of each elutant were serially diluted and cultured to quantify virus particles. 1 The frequency of contamination between standard and seamless PPE was compared using the Fischer’s exact test. Data were analyzed using R version 3.1.1. 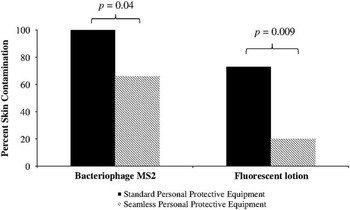 Our results demonstrate that a prototype PPE design that ensures wrist coverage and requires the wearer to remove gloves and gown simultaneously can reduce self-contamination of the hands and wrists. Other PPE designs have also been proposed to reduce contamination at the gown–glove interface. For example, Meyer and Beck 5 adapted the gown sleeve to the circumference of the wearer’s forearm by creating darts or flaps that are folded over each other and sealed; after donning, the glove cuff is sealed to the gown underneath. Another method to prevent wrist skin exposure and facilitate doffing employs fingerless cloth gloves attached to the gown sleeve under the gloves. 7 When the user removes their gloves, the hand wear restrains the gown and reduces exposure to the outer contaminated surface of the glove.

Our study has some limitations. The number of assessments was small. We did not include training of personnel in the protocol. Thus, it is not known whether the modified PPE would provide a benefit in reducing contamination for personnel who have received training. Finally, the prototype design is more difficult to don than standard PPE because the gloves are attached to the gown. However, our ultimate goal is to modify the design to allow gloves and gowns to be donned separately followed by adherence of the glove and gown material after donning.

Financial support: This work was supported by the Department of Veterans Affairs.