To the Editor— Surgical site infection (SSI) among patients undergoing oncosurgery for cancer can increase the chances of morbidity and mortality, delay discharge from the hospital, increase healthcare costs, and affect subsequent management of cancers (through the delay of chemotherapy or radiotherapy).Reference Payne, Naidu and Wheeler 1 The challenges of SSI are greater in low- and middle-income countries because of resource constraints and due to endemicity of multidrug-resistant gram-negative bacteria (MDR-GNB), which colonizes and infects patients in significant numbers.Reference Bhattacharya, Goel, Mukherjee, Bhaumik and Chandy 2 – Reference Umpunthongsiri, Apisarnthanarak and Srimanoj 4 SSI rates are also influenced by preoperative comorbidities.Reference Young, Badgery-Parker and Dobbins 5 – Reference Roche, Wenn, Sahota and Moran 7 In the current study, we report the impact of significant MDR-GNB colonization and concurrent comorbidity on SSI and long-term surgical outcomes.

The current retrospective study was conducted among patients operated for endometrial cancer in an oncology center in eastern India between 2011 and 2016. In total, 150 patients underwent gynecological oncosurgery during this period. Most patients in the study population were of postmenopausal age (median age, 58 years; range, 34–81 years; interquartile range [IQR], 54–64 years). Most patients were overweight or obese (median body mass index, 30 kg/m2; IQR, 26–33 kg/m2; range, 14–48 kg/m2). Of the 150 patients, 113 (75%) had 1 or more comorbidities (eg, asthma, diabetes, hypertension, hypothyroidism). Hypertension was the most common comorbidity, affecting 86 of 150 patients, followed by diabetes mellitus in 61 of 150 patients (40.6%) and hypothyroidism in 42 of 150 patients (28%). In addition, 44% of the patients had 2 or more comorbidities and 10% had 3 or more comorbidities. The Eastern Cooperative Oncology Group (ECOG) score, which reflects the impact of the primary disease and comorbidities on the patient, showed that 90 of 150 patients (60%) had at least a restriction of physically strenuous activity but were ambulatory and able to carry out work of a light or sedentary nature (ie, an ECOG score of 1 or more). Also, 55 of 150 patients (37%) were fully active and were able to perform all activities before their disease without restriction (ie, an ECOG of 0). Only 4.6% of the patients had an ECOG score of 2 or 3. Histopathologic grading of the patients showed that 83 of 150 patients (55%) had grade 1 endometrial cancer, whereas 25% had grade 2 and 11% had grade 3. In terms of the tumor-node-metastasis (TNM) staging, 93 of 150 patients (62%) had stage 1 disease.

The types of surgeries performed included (1) total abdominal hysterectomy with pelvic lymph node dissection, (2) completion surgery with pelvic and para-aortic lymph-node dissection and total omentectomy, (3) debulking surgery, (4) staging laparotomy, (5) laparoscopic completion surgery, and (6) colorectal surgery. Open surgeries were performed on 72 of 150 patients (48%), and laparoscopic surgeries were was performed on 33.3% of patients. Also, 13% of the patients had repeat surgeries, whereas 14% of the patients had an initial surgery at an external hospital. The median surgical duration was 430 minutes (IQR, 330–540 minutes; range, 105–955 minutes). An intraoperative complication such as organ injury, nerve injury, or blood vessel injury, occurred in 9 of 150 patients (6%). The median blood loss during surgery was 350 mL (IQR, 200–700 mL).

The duration of hospital stay for the operated patients ranged from 1 to 28 days (median, 5 days; IQR, 4–8 days). The rate of suspected or confirmed postoperative infection was high; 114 of 150 patients (76%) were on 1 or more antibiotics before hospital discharge. The SSI rate was 21% (31 of 150); however, wound complication in the ward occurred in 19 of 150 patients (12.5%). Multidrug-resistant organisms were detected in the postoperative diagnostic cultures of 18 of 150 patients (12%): MRSA, 1 patient; ESBL, 14 patients, carbapenem resistant organisms, 6 patients). Other postoperative complications included urinary tract infection in 4 patients, laboratory confirmed blood stream infection in 3 patients, and wound complications (requiring secondary suturing) in 10 patients. The all cause 30-day mortality (all cause or crude mortality) rate was 1.32% (2 of 150 patients) (Figure 1). 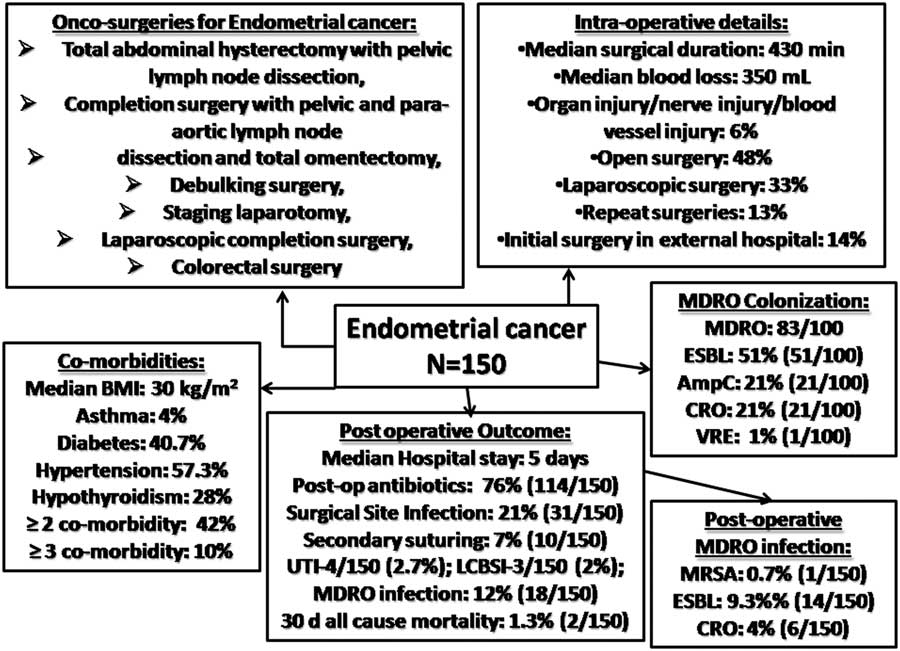 Of the 150 patients included in this study, 6 patients (4%) were lost to follow-up. In addition, 12 patients (8%) required referral to other departments: radiation oncology, 6 patients; medical oncology, 3 patients; palliative care, 2 patients; general medicine, 1 patients). Patient follow-up duration was a median of 26 months postsurgery (IQR, 12–36 months). By the end of follow-up, only 2 of 150 patients (1.3%) had died.

The presence of preoperative comorbidities and performance scores, such as the ECOG, are often used as predictors of postoperative morbidity and risk stratification before oncosurgical intervention.Reference Young, Badgery-Parker and Dobbins 5 – Reference Roche, Wenn, Sahota and Moran 7 Oncosurgery in a population with a high prevalence of 1 or more medical morbidities is difficult and is prone to intraoperative and postoperative complications, including SSI and other infections. Our study demonstrates that various multimodal strategies, such as appropriate patient selection for surgery, MDRO colonization screening, aggressive management of suspected/confirmed infection, early postoperative enteral nutrition, physiotherapy, antibiotic stewardship, and/or wound management, could reduce all-cause mortality, even after radical surgery for endometrial cancer patients, in settings with high rates of MDRO colonization, MDR infection, and other postoperative infections.Reference Poggio 8 – Reference Yin and Gui 10

We would like to thank the gynecological oncosurgery team, nursing staff, and the infection control team of Tata Medical Center, Kolkata, India, for their support.