To the Editor—Severe fever with thrombocytopenia syndrome (SFTS) is an emerging hemorrhagic fever-like illness caused by a novel bunyavirus. SFTS bunyavirus (SFTSV) infection causes a wide variety of clinical manifestations that range from asymptomatic infection to various grades of severe disease. The average case fatality rate of SFTS is 12%.Reference Liu, Zhou and Sun 1 SFTS disease is typically transmitted via tick biteReference Yu, Liang and Zhang 2 ; however, sporadic human-to-human transmitted SFTS cases have also been reported.Reference Bao, Qi and Wang 3 – Reference Bao, Guo and Qi 6 In 2015, a needle-stick injury event caused by an SFTS patient occurred in Korea but did not result in infection.Reference Yoon Park, Kim and Park 7 Here, we describe the first 2 cases of occupational SFTS acquired by needle-stick injury in a tertiary hospital in Jiangsu Province, China.

Case 1: On May 22, 2016, a 46-year-old male with a 4-day history of abrupt fever and fatigue was admitted to our hospital. Laboratory results indicated leukopenia and thrombocytopenia. On May 24, his condition continued to worsen, developing multiple organ dysfunction syndrome (MODS) and coagulation disorder. A 26-year-old female nurse, when collecting blood from this patient, sustained an accidental needle-stick injury with the catheter stylet. The needle stick pierced her middle finger and caused a deep, blood-letting injury. She immediately encouraged the bleeding at the site of puncture and disinfected the wound with iodine. On May 26, real-time reverse-transcriptase polymerase chain reaction (RT-PCR) assay showed positive for SFTSV for the index patient with a viral load of 6.3×104 copies/mL. On June 5, the nurse presented with a fever of 39.0°C along with fatigue, chills, and poor appetite. She received empirical ribavirin and other supportive treatment. The next day, RT-PCR confirmed the presence of SFTSV in the blood of both patients, and the viral load in the nurse was 1.6×103 copies/mL. On day 10, she was fully recovered (Figure 1A). 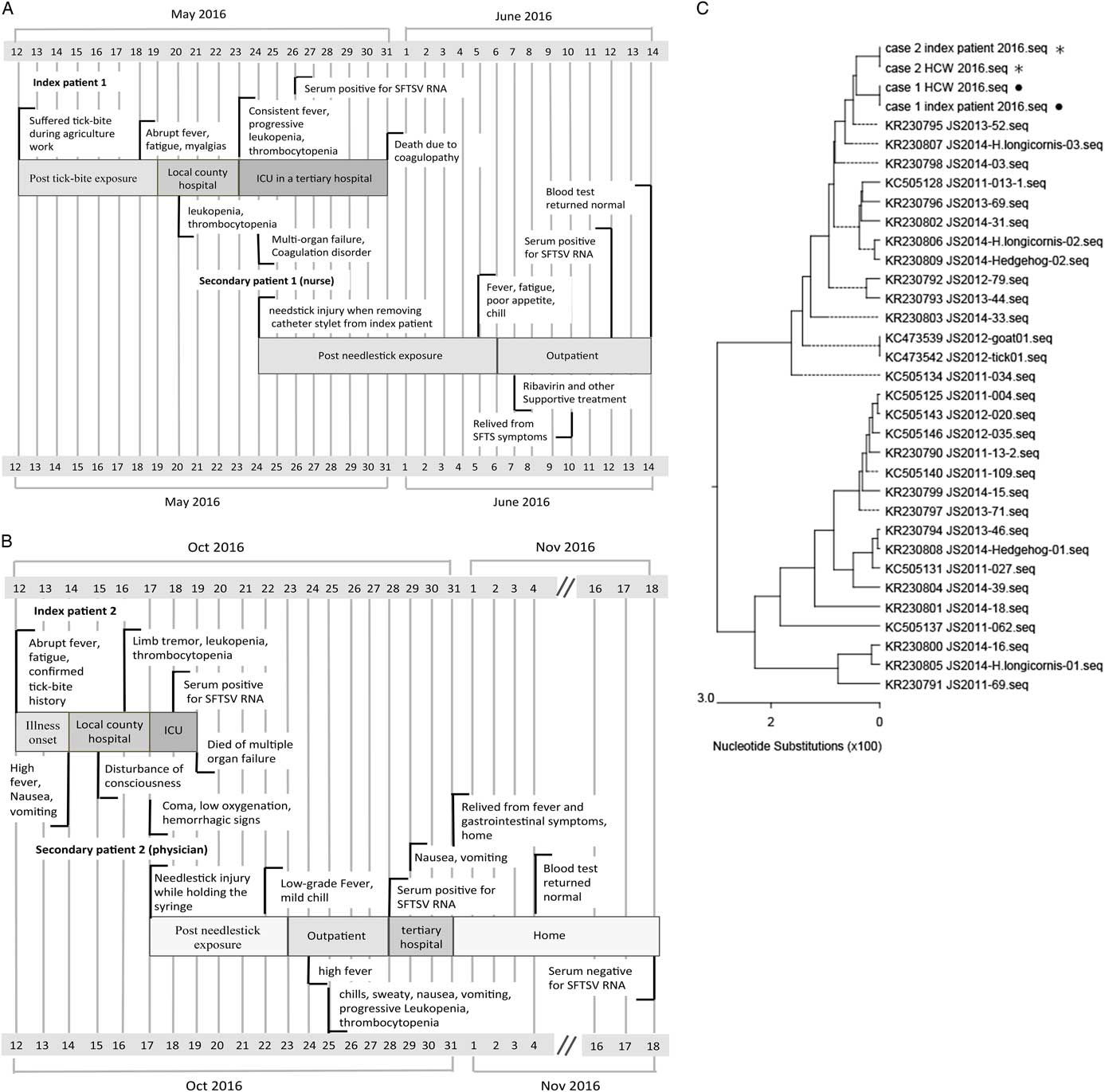 Figure 1 Clinical key events and phylogenetic analysis of SFTS virus in 2 cases of nosocomial SFTS infection. (A and B) Timelines of progression in the clinical courses of both healthcare workers with occupational SFTS following needle stick. (C) Phylogenetic analysis showing the S segments of SFTSV strains obtained from case 1 (dots) and case 2 (asterisks) as well as other SFTSV strains obtained from the same province, Jiangsu. Virus GenBank number, province of isolation, and year of isolation are labeled. The nucleotide sequence divergence is shown in the scale bar. Abbreviations: ICU, intensive care unit; SFTSV, severe fever with thrombocytopenia syndrome bunyavirus.

Case 2: On October 17, 2016, a 70-year-old man was admitted to our hospital with a 5-day history of abrupt fever, leukopenia, thrombocytopenia, and coagulation disorders. A history of tick bite was confirmed. A 35-year-old physician suffered a needle-stick injury while collecting his arterial blood. While removing the syringe from the patient, his right hand (holding the syringe) was bumped by a passerby, resulting in a 2.0-cm-deep wound on his left palm via needle stick. He promptly disinfected the wound. SFTSV RNA was detected from serum of the index patient with a viral load of 1.58×109 copies/mL. On day 5 after exposure, this physician developed a low-grade fever and mild chills. He had progressive leukopenia and thrombocytopenia for the following 4 days. On day 6, he was admitted to our hospital and started ribavirin and other supportive regimens. On day 9, his clinical presentations of nausea, vomiting, and fever were resolved. However, his laboratory test still indicated leukopenia, neutropenia, and elevated level of liver related enzymes. SFTSV RNA was identified from his serum with a viral load of 1×103 copies/mL. On day 14, his laboratory result returned to normal. On day 28, his blood sample was negative for SFTSV RNA (Figure 1B).

Both healthcare workers (HCWs) denied the history of tick bite, exposure to wild animals, or contact with other SFTS patients before disease onset. Furthermore, they developed SFTS symptoms after a brief incubation after exposure, and their sera were positive for SFTSV RNA. More importantly, the S segments of SFTSV obtained from the index patients and HCWs in both cases were sequenced. The S segment sequences from the index patients and HCWs were 100% identical in both cases, respectively (GenBank accession nos. KY511126 through KY511129), and these 2 cases clustered together in the phylogenetic tree (Figure 1C). Collectively, these data support the hypothesis of SFTS transmission through percutaneous needle stick. Interestingly, both occupationally acquired SFTS cases developed mild symptoms, probably due to low viral loads.

Both HCWs were well trained and had no previous history of needle-stick injury, indicating the vulnerability of HCWs to occupationally acquired SFTS infection.

A guideline for the prevention and control of SFTS disease should emphasize stringent infection control measures, including wearing double gloves, face shields, and other personal protective equipment by all caregivers to avoid direct contact of skin with infected blood. Furthermore, appropriate education and training of HCWs will also help to prevent nosocomial transmission. If any percutaneous exposure to contaminated blood occurs, HCWs should immediately disinfect the wound and notify the hospital occupational medicine department. Ribavirin prophylaxis could be administered, and the clinical presentations and blood tests should be routinely monitored. Only stringent surveillance, rapid diagnostic capacity, and effective infection control will minimize the nosocomial spread of SFTS.

SFTSV is a newly recognized member of family Bunayaviridae, which is 1 of 5 families that cause viral hemorrhagic fever. Notably, beyond tick-borne transmission, nosocomial outbreak of several bunyaviruses has also been well documented, such as the Crimean-Congo hemorrhagic fever virusReference Aradaib, Erickson and Mustafa 8 and the Rift Valley fever virus.Reference Al-Hamdan, Panackal and Al Bassam 9 However, Hantavirus causing hemorrhagic fever renal syndrome (HFRS) is rarely transmitted among humans, suggesting a fundamental difference in transmission mode for viruses in family Bunayaviridae. A deep understanding of viral pathogenesis and all potential transmission routes of SFTS would support appropriate interventions to prevent further SFTS outbreaks.