Iterative Fecal Microbiota Transplantations for Eradicating Digestive Colonization With Carbapenemase-Producing Enterobacteriaceae: Is It Worth It?

To the Editor—Carbapenemase-producing Enterobacteriaceae (CPE) have emerged as a major source of bacterial resistance, and their dissemination is a serious public health threat.Reference Logan and Weinstein 1 Furthermore, those bacteria can disseminate outside the hospital setting. A large study including 34 hospitals in Spain demonstrated that a significant proportion of patients identified as colonized or infected with CPE during hospitalization probably acquired this organism in a nursing home during the period preceding their hospital admission.Reference Palacios-Baena, Oteo and Conejo 2 In addition, a recent review of the literature demonstrated that according to US-based studies, the percentage of CPE isolates that could be associated with the community ranged from 5.6% to 10.8%.Reference Kelly, Mathema and Larson 3

We have recently demonstrated the less effective effect of fecal microbiota transplantation (FMT) on CPE compared to vancomycin-resistant Enterococci (VRE) fecal carriage.Reference Mahieu, Cassisa and Hilliquin 4 Those results are consistent with another recent studyReference Davido, Batista and Michelon 5 conducted in 6 patients colonized with CPE and showing an eradication of the colonization in only 2 of these 6 patients. In these studies, the decolonization procedure included only 1 FMT procedure. One hypothesis is that a protocol including iterative FMT separated by a several-day latency could increase the effectiveness of the procedure.

Our objective was to evaluate the impact of iterative FMT for the clearance of CPE carriage in our mouse model of digestive colonization. Ethical approval was obtained from the Ethical Committee in Animal Experimentation of Pays-dela-Loire, France (reference no. 2015041415088410/APAFIS 513) and was conducted according to European directives concerning the use of animals in research (86/609/EEC).

In this model, 28 8-week-old mice (Swiss type) were used. The normal digestive flora were disrupted with the daily oral administration of a combination of antimicrobial agents including vancomycin (50 mg/kg), metronidazole (25 mg/kg), and ceftriaxone (25 mg/kg) over 5 days (ie, day 1 to day 5). Mice were then randomized to receive a high inoculum (5×109 bacteria) of a strain of Escherichia coli producing a New Delhi metallo-β-lactamase-1 (NDM-1). Those bacteria were inoculated to the mice via oral gavage on day 4, day 5, and day 8. Mice were housed in individual cages.

Fecal microbiota were collected daily from related (Swiss mice of the same age) untreated mice. Stool suspensions for FMT were prepared and stored as previously described.Reference Mahieu, Cassisa and Hilliquin 4 On day 10, mice were randomized to receive FMT (14 mice) or placebo (14 mice). During the experiment, 4 series of FMT or placebo administration were performed on all mice. In each series, the mice received FMT or placebo once daily for 3 successive days (from day 10 to day 12, from day 23 to day 25, from day 37 to day 39, and from day 49 to day 51) by oral gavage with 200 µL of the stool suspension or 200 µL of saline, respectively.

The evolution of the percentage of colonized mice during the follow-up period was studied using Kaplan-Meier analysis (SPSS version 15.0 software, IBM, Armonk, NY). The comparison between the FMT group and the placebo group was performed using the log-rank test. The comparison of the percentage of colonized mice in each group at day 57 was performed with the Fisher exact test. A P value<.05 was considered statistically significant.

The results are presented in Figure 1. Overall, by considering the placebo effect corresponding to the natural clearance of CPE digestive colonization of mice, the iterative FMT series demonstrated a moderate impact on the decolonization kinetics (P=.22). However, by considering the difference between the FMT protocol and the placebo at the end of the follow-up period, the decolonization rates were clearly different: 7 of 14 (50%) and 3 of 14 (21%), respectively. However, this difference was not significant (P=.11). 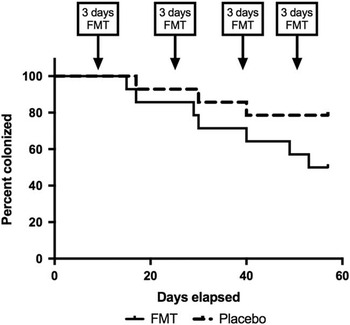 FIGURE 1 Comparative effect of iterative fecal microbiota transplantation and placebo administration on the digestive colonization with a carbapenemase-producing Escherichia coli in a mouse model.

Due to the low number of mice included, this study only provides preliminary results. Moreover, the uncertainty of the repeatability of this murine experiment in humans must be considered.

The iterative FMT allowed the eradication of CPE in 50% of colonized mice, which can be considered as a moderately convincing result. In a recent studyReference Bilinski, Grzesiowski and Sorensen 6 conducted with patients presenting blood disorders, the digestive carriage of NDM-1–producing Klebsiella pneumonia was eradicated in 6 of 14 of cases (<50%). Notably, in our experiment, the decrease of the percentage of colonized mice was higher in the FMT group than in the placebo group for each of the 4 treatment series (Figure 1). However, the short length of stay of most hospitalized patients limits the applicability of a decolonization protocol including iterative FMT in the clinical practice. However, iterative FMT is conceivable for patients hospitalized in long-term-care facilities or for the residents in nursing homes, in contexts of uncontrolled cross-transmission during certain outbreaks of CPE carriage and if the FMT are administered orally. Additional studies are needed to evaluate the impact of the composition of the transplanted fecal material on the FMT outcome in terms of CPE eradication. Indeed, Ubeda et alReference Ubeda, Bucci and Caballero 7 have recently demonstrated that intestinal microbiota transplant containing Barnesiella species cured VRE colonization in mice.