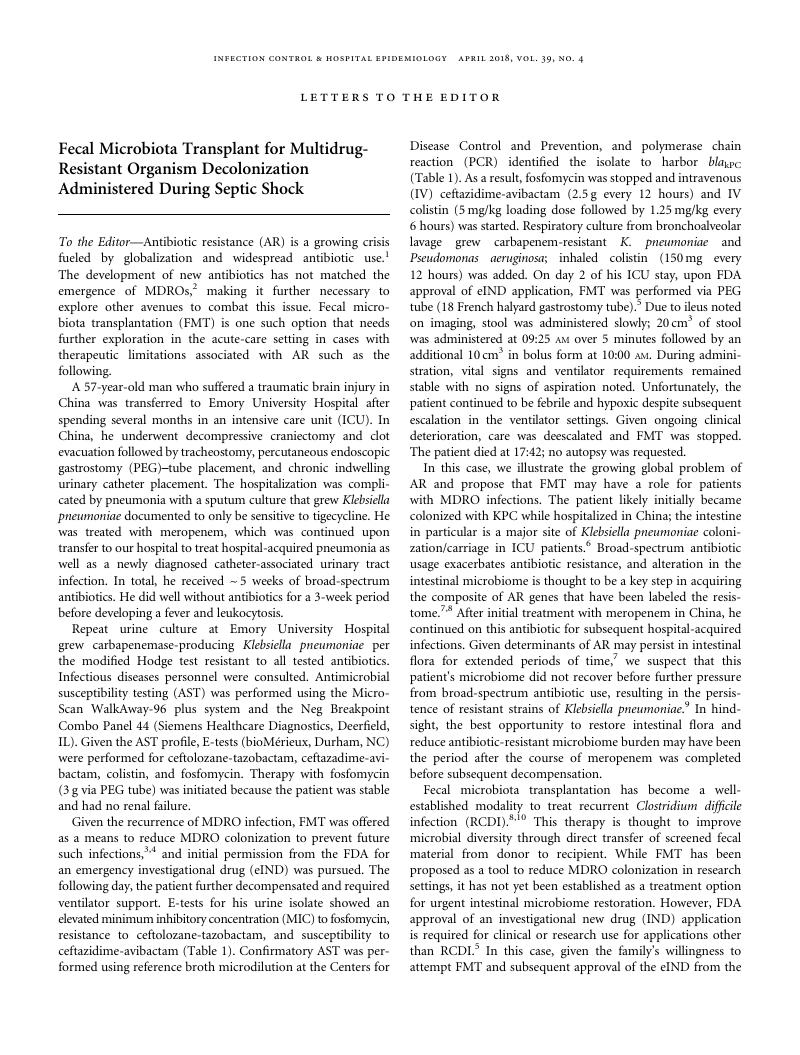 An abstract is not available for this content so a preview has been provided. To view the full text please use the links above to select your preferred format.
Type
Letters to the Editor
Information
Infection Control & Hospital Epidemiology , Volume 39 , Issue 4 , April 2018 , pp. 490 - 492
DOI: https://doi.org/10.1017/ice.2017.300[Opens in a new window]
Copyright
© 2018 by The Society for Healthcare Epidemiology of America. All rights reserved

To the Editor—Antibiotic resistance (AR) is a growing crisis fueled by globalization and widespread antibiotic use. 1 The development of new antibiotics has not matched the emergence of MDROs,Reference Martens and Demain 2 making it further necessary to explore other avenues to combat this issue. Fecal microbiota transplantation (FMT) is one such option that needs further exploration in the acute-care setting in cases with therapeutic limitations associated with AR such as the following.

A 57-year-old man who suffered a traumatic brain injury in China was transferred to Emory University Hospital after spending several months in an intensive care unit (ICU). In China, he underwent decompressive craniectomy and clot evacuation followed by tracheostomy, percutaneous endoscopic gastrostomy (PEG)–tube placement, and chronic indwelling urinary catheter placement. The hospitalization was complicated by pneumonia with a sputum culture that grew Klebsiella pneumoniae documented to only be sensitive to tigecycline. He was treated with meropenem, which was continued upon transfer to our hospital to treat hospital-acquired pneumonia as well as a newly diagnosed catheter-associated urinary tract infection. In total, he received ~5 weeks of broad-spectrum antibiotics. He did well without antibiotics for a 3-week period before developing a fever and leukocytosis.

Given the recurrence of MDRO infection, FMT was offered as a means to reduce MDRO colonization to prevent future such infections,Reference Bilinski, Grzesiowski and Sorensen 3 , Reference Dubberke, Mullane and Gerding 4 and initial permission from the FDA for an emergency investigational drug (eIND) was pursued. The following day, the patient further decompensated and required ventilator support. E-tests for his urine isolate showed an elevated minimum inhibitory concentration (MIC) to fosfomycin, resistance to ceftolozane-tazobactam, and susceptibility to ceftazidime-avibactam (Table 1). Confirmatory AST was performed using reference broth microdilution at the Centers for Disease Control and Prevention, and polymerase chain reaction (PCR) identified the isolate to harbor bla kPC (Table 1). As a result, fosfomycin was stopped and intravenous (IV) ceftazidime-avibactam (2.5 g every 12 hours) and IV colistin (5 mg/kg loading dose followed by 1.25 mg/kg every 6 hours) was started. Respiratory culture from bronchoalveolar lavage grew carbapenem-resistant K. pneumoniae and Pseudomonas aeruginosa; inhaled colistin (150 mg every 12 hours) was added. On day 2 of his ICU stay, upon FDA approval of eIND application, FMT was performed via PEG tube (18 French halyard gastrostomy tube).Reference Woodworth, Neish and Miller 5 Due to ileus noted on imaging, stool was administered slowly; 20 cm3 of stool was administered at 09:25 am over 5 minutes followed by an additional 10 cm3 in bolus form at 10:00 am. During administration, vital signs and ventilator requirements remained stable with no signs of aspiration noted. Unfortunately, the patient continued to be febrile and hypoxic despite subsequent escalation in the ventilator settings. Given ongoing clinical deterioration, care was deescalated and FMT was stopped. The patient died at 17:42; no autopsy was requested.

a FDA breakpoints used for ceftazidime-avibactam and tigecycline; all other drugs were interpreted according to CLSI criteria.

In this case, we illustrate the growing global problem of AR and propose that FMT may have a role for patients with MDRO infections. The patient likely initially became colonized with KPC while hospitalized in China; the intestine in particular is a major site of Klebsiella pneumoniae colonization/carriage in ICU patients.Reference Gorrie, Mirceta and Wick 6 Broad-spectrum antibiotic usage exacerbates antibiotic resistance, and alteration in the intestinal microbiome is thought to be a key step in acquiring the composite of AR genes that have been labeled the resistome.Reference Forslund, Sunagawa and Kultima 7 , Reference Millan, Laffin and Madsen 8 After initial treatment with meropenem in China, he continued on this antibiotic for subsequent hospital-acquired infections. Given determinants of AR may persist in intestinal flora for extended periods of time,Reference Forslund, Sunagawa and Kultima 7 we suspect that this patient’s microbiome did not recover before further pressure from broad-spectrum antibiotic use, resulting in the persistence of resistant strains of Klebsiella pneumoniae.Reference Lawley, Clare and Walker 9 In hindsight, the best opportunity to restore intestinal flora and reduce antibiotic-resistant microbiome burden may have been the period after the course of meropenem was completed before subsequent decompensation.

Fecal microbiota transplantation has become a well-established modality to treat recurrent Clostridium difficile infection (RCDI).Reference Millan, Laffin and Madsen 8 , Reference Bakken, Borody and Brandt 10 This therapy is thought to improve microbial diversity through direct transfer of screened fecal material from donor to recipient. While FMT has been proposed as a tool to reduce MDRO colonization in research settings, it has not yet been established as a treatment option for urgent intestinal microbiome restoration. However, FDA approval of an investigational new drug (IND) application is required for clinical or research use for applications other than RCDI.Reference Woodworth, Neish and Miller 5 In this case, given the family’s willingness to attempt FMT and subsequent approval of the eIND from the FDA, FMT was performed. With the patient in septic shock, FMT was attempted as the slim benefit of an unknown mechanism outweighed the minimal risk associated with the procedure.

We anticipate that as difficult cases such as this become increasingly frequent, there may be a role for FMT in the acute-care setting, especially for intra-abdominal infections. Rather than requiring emergent approval for FMT, incorporating protocols detailing FMT into the inpatient standard of care for MDRO colonization may result in a more expedient implementation before it is potentially too late and the patient develops new and potentially more life-threatening infections.