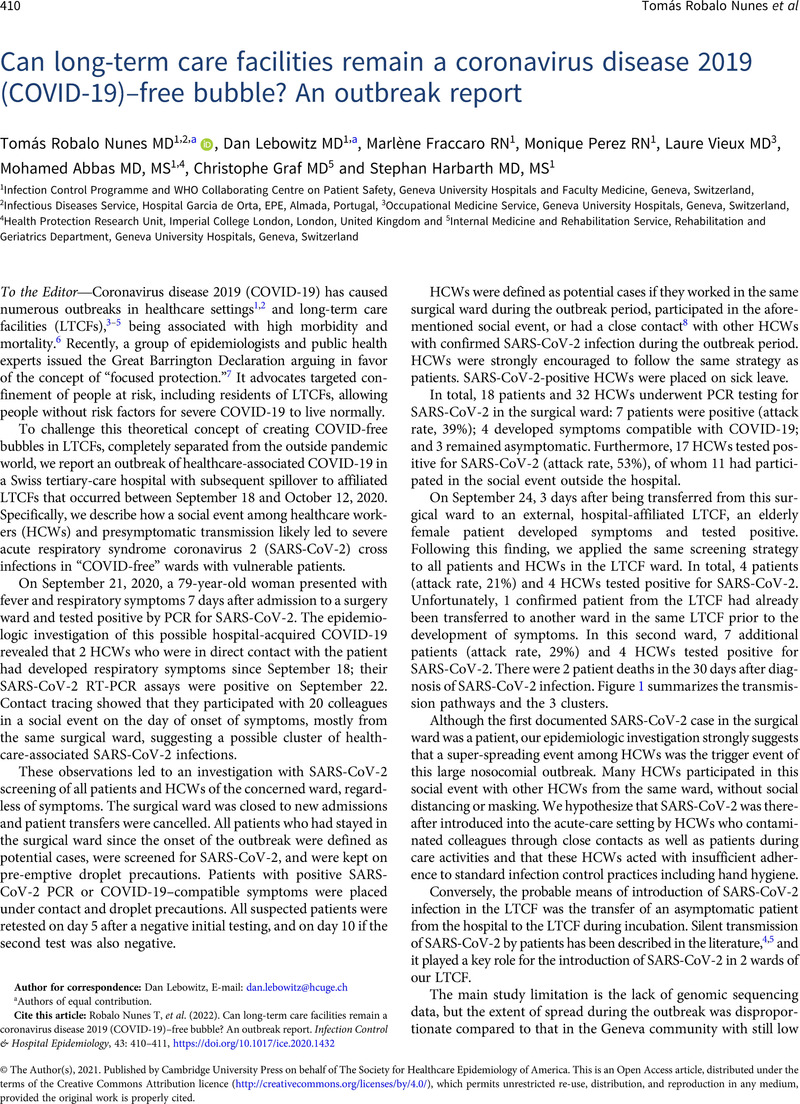 An abstract is not available for this content so a preview has been provided. To view the full text please use the links above to select your preferred format.
Type
Letter to the Editor
Information
Infection Control & Hospital Epidemiology , First View , pp. 1 - 2
DOI: https://doi.org/10.1017/ice.2020.1432[Opens in a new window]
Copyright
© The Author(s), 2021. Published by Cambridge University Press on behalf of The Society for Healthcare Epidemiology of America

To the Editor—Coronavirus disease 2019 (COVID-19) has caused numerous outbreaks in healthcare settings Reference Gao, Yuan and Xiong1,Reference Kim, Jo and Lee2 and long-term care facilities (LTCFs), Reference Dora, Winnett and Jatt3–Reference Arons, Hatfield and Reddy5 being associated with high morbidity and mortality. Reference Graham, Junghans and Downes6 Recently, a group of epidemiologists and public health experts issued the Great Barrington Declaration arguing in favor of the concept of “focused protection.” 7 It advocates targeted confinement of people at risk, including residents of LTCFs, allowing people without risk factors for severe COVID-19 to live normally.

To challenge this theoretical concept of creating COVID-free bubbles in LTCFs, completely separated from the outside pandemic world, we report an outbreak of healthcare-associated COVID-19 in a Swiss tertiary-care hospital with subsequent spillover to affiliated LTCFs that occurred between September 18 and October 12, 2020. Specifically, we describe how a social event among healthcare workers (HCWs) and presymptomatic transmission likely led to severe acute respiratory syndrome coronavirus 2 (SARS-CoV-2) cross infections in “COVID-free” wards with vulnerable patients.

On September 21, 2020, a 79-year-old woman presented with fever and respiratory symptoms 7 days after admission to a surgery ward and tested positive by PCR for SARS-CoV-2. The epidemiologic investigation of this possible hospital-acquired COVID-19 revealed that 2 HCWs who were in direct contact with the patient had developed respiratory symptoms since September 18; their SARS-CoV-2 RT-PCR assays were positive on September 22. Contact tracing showed that they participated with 20 colleagues in a social event on the day of onset of symptoms, mostly from the same surgical ward, suggesting a possible cluster of healthcare-associated SARS-CoV-2 infections.

These observations led to an investigation with SARS-CoV-2 screening of all patients and HCWs of the concerned ward, regardless of symptoms. The surgical ward was closed to new admissions and patient transfers were cancelled. All patients who had stayed in the surgical ward since the onset of the outbreak were defined as potential cases, were screened for SARS-CoV-2, and were kept on pre-emptive droplet precautions. Patients with positive SARS-CoV-2 PCR or COVID-19–compatible symptoms were placed under contact and droplet precautions. All suspected patients were retested on day 5 after a negative initial testing, and on day 10 if the second test was also negative.

HCWs were defined as potential cases if they worked in the same surgical ward during the outbreak period, participated in the aforementioned social event, or had a close contact 8 with other HCWs with confirmed SARS-CoV-2 infection during the outbreak period. HCWs were strongly encouraged to follow the same strategy as patients. SARS-CoV-2-positive HCWs were placed on sick leave.

In total, 18 patients and 32 HCWs underwent PCR testing for SARS-CoV-2 in the surgical ward: 7 patients were positive (attack rate, 39%); 4 developed symptoms compatible with COVID-19; and 3 remained asymptomatic. Furthermore, 17 HCWs tested positive for SARS-CoV-2 (attack rate, 53%), of whom 11 had participated in the social event outside the hospital.

On September 24, 3 days after being transferred from this surgical ward to an external, hospital-affiliated LTCF, an elderly female patient developed symptoms and tested positive. Following this finding, we applied the same screening strategy to all patients and HCWs in the LTCF ward. In total, 4 patients (attack rate, 21%) and 4 HCWs tested positive for SARS-CoV-2. Unfortunately, 1 confirmed patient from the LTCF had already been transferred to another ward in the same LTCF prior to the development of symptoms. In this second ward, 7 additional patients (attack rate, 29%) and 4 HCWs tested positive for SARS-CoV-2. There were 2 patient deaths in the 30 days after diagnosis of SARS-CoV-2 infection. Figure 1 summarizes the transmission pathways and the 3 clusters.

Although the first documented SARS-CoV-2 case in the surgical ward was a patient, our epidemiologic investigation strongly suggests that a super-spreading event among HCWs was the trigger event of this large nosocomial outbreak. Many HCWs participated in this social event with other HCWs from the same ward, without social distancing or masking. We hypothesize that SARS-CoV-2 was thereafter introduced into the acute-care setting by HCWs who contaminated colleagues through close contacts as well as patients during care activities and that these HCWs acted with insufficient adherence to standard infection control practices including hand hygiene.

The main study limitation is the lack of genomic sequencing data, but the extent of spread during the outbreak was disproportionate compared to that in the Geneva community with still low incidence, confirming an expanded cluster of infections in the involved wards.

This outbreak report highlights the ease of transmission between various settings, including the community, the acute-care setting, and affiliated LTCFs, involving asymptomatic patients. It seems indeed impossible to control the social life of HCWs, just like that of any other individual. Furthermore, HCWs are at the interface between hospitals and the community, always at risk to silently introduce SARS-CoV-2 in the workplace. Reference Sikkema, Pas and Nieuwenhuijse9,Reference Asad, Johnston and Blyth10 Daily screening of HCWs seems an unrealistic concept on a large scale. Therefore, healthcare facilities can hardly remain a SARS-CoV-2–free bubble, especially as the prevalence in the community rises.

We thank all members of the infection control program and all HCWs involved in the analysis of this outbreak.