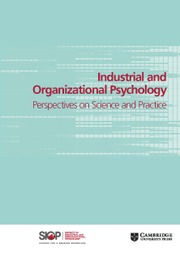 Our first article, “From Handmaidens to POSH Humanitarians: The Case for Making Human Capabilities the Business of I-O Psychology,” by Alexander Gloss, Stuart Carr, Walter Reichman, Inusah Abdul-Nasiru, and W. Trevor Oestereich, provides a compelling and inspired disquisition regarding I-O psychology's fundamental and pervasive bias away from people living in multidimensional poverty—a bias that introduces scientific, practice-related, and moral problems for I-O psychology. The authors make a pointed argument that the I-O field's bias toward (a) Professionals, (b) who hold Official jobs in a formal economy, and (c) who enjoy relative Safety from discrimination while also (d) living in High-income countries (POSH) severely limits I-O psychology's overall impact and relevance for the majority of the world's population. Gloss et al. make the case that promoting the capabilities (freedoms) of people living in the deepest forms of poverty not only facilitates the broader application of I-O science and practice but is also an achievable moral imperative.

The first set of commentaries extended the focal article's themes and highlighted strategies for delivering on Gloss et al.’s call to action. These commentaries presented a variety of recommendations for legitimizing humanitarian concerns within mainstream I-O scholarship and practice, and presented cogent arguments for building and promoting capabilities. These commentary authors also pointed to the value of collaborating and learning from other disciplines and ensuring that all non-POSH groups are considered. The authors of the second set of commentaries agree with the overall premise of the POSH bias and believe in the value of this article; however, they take issue with the proposed solution (e.g., human capabilities approach). These authors argue that a more macro level of analysis is required to provide a platform for human development across all societal levels, and that working on human capabilities before we address the root of poverty (e.g., failures of capitalism, public policy, shortage of global resources) may in fact worsen the situation. These authors provide some thought-provoking and incisive commentary to support their perspectives.

In our second article, “Meta-Analysis and the Myth of Generalizability,” Robert P. Tett, Nathan A. Hundley, and Neil D. Christiansen review meta-analytic findings published over the past 35 years and discovered that in many cases, substantial variance in validity estimates remain after accounting for artifacts – which they argue, leads to potentially misguided interpretation of the results. Tett et al. provide evidence that substantial residual variance is attributable to moderators, in support of situational specificity, and offer recommendations for researchers for extending the rigor of meta-analytic methods to more precisely interpret and use meta-analytic findings. The authors’ goal was to generate renewed dialogue about the value of meta-analysis as a knowledge-generating framework and to clarify the meaning of generalizability.

There were two sets of commentaries that followed two general themes. The first set amplified the focal authors’ position that caution is called for when generalizing findings across domains and called for greater precision in attaching meaning to the statistic that is being generalized. These commentaries extend the focal article by suggesting alternate sources of variability responsible for misguided interpretation and offer additional solutions (e.g., build confidence intervals around SDρ, report uncertainty regarding the endpoints of the credibility intervals). The second set of commentaries take issue with many of the points made within the focal article and indicate that VG, like any statistical technique can be misused in its applications. However, like other statistical methods, VG results should not be interpreted as a dichotomy but as a matter of degree, and that outdated VG practices should not be confused with VG as a sound scientific method. These commentaries point out that the focal article is debunking extreme, “strawman” examples of VG (fixed effects assumption, incorrect indices of precision) that run counter to the approach taken by enlightened VG researchers.

It would not be possible to publish this journal without the hard work of talented reviewers. I appreciate the significant help and input of Michael Frese, Joel Lefkowitz, Lori Foster, Michael Burke, and Ronald Landis.