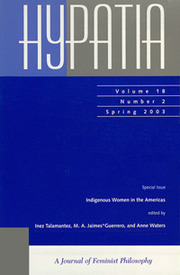 Indigenous Women in the Americas

Special Cluster: Feminist Philosophy and the Problem of Evil