The online version of this article is published within an Open Access environment subject to the conditions of the Creative Commons Attribution licence .
Copyright
© The Author(s) 2014

In practical short pulse applications, the amplified pulse by CPA or OPCPA will be focused onto the target using an OAP after being compressed by a grating compressor. The analogy can be made between the OAP focusing subsystem and an ideal lens, because it linearly reflects propagation in free space without dispersion, chromatic aberration or B-integral nonlinear effects, the spatial intensity distribution of which can be calculated by the Fresnel diffraction integral formula:

$y$ are the coordinates in the observation plane

$y_{0}$ are the coordinates in the incident plane,

$f$ is the focal length of the OAP.

For higher spatial resolution and a more accurate result, on applying the coordinate transforms

When Equation (2) is applied to focusing propagation (

$z^{\prime }$ is encountered, which can be ingeniously resolved by a two-step simulation, first calculating from

$z=L$ with coordinate transforms and finally calculating from

$z=f$ without coordinate transforms, in which angular spectrum diffraction theory is applied. The value of

$L$ is related to the coordinate magnification, which determines whether there are sufficient effective sampling points in the focal spot area. At the same time, the value of

$L$ determines whether the situation meets the requirement for the Fresnel approximation in step one with coordinate transforms. With this method in two spatial dimensions, the calculation of the focusing characteristics of a short wavelength laser beam through a short focus system has been successfully made[Reference Yang, Zhong and Ren13].

Thus, we can use an operator

$P_{\text{space}}$ to represent the above focusing calculation:

The output field as a function of time is given by the inverse time Fourier transform:

Then, the temporal contrast can be derived by the temporal distribution of the normalized pulse intensity. In this paper, simulation of one dimension in space is used to demonstrate the influence of spatial near-field quality on temporal contrast. The idea of the two-step coordinate transformed space–time propagation simulation is shown in Figure 1.

$r$ is the radial coordinate.

Figure 1. The simulation algorithm of time and space focusing.

In practical applications, the real near-field intensity is always modulated rather than an ideal FGB due to multiple causes, such as diffraction and nonlinear growth. The fill factor (FF) of the laser beam is usually used to describe the uniformity of the modulated near-field intensity, which is defined as the ratio of the average intensity and the peak intensity in the flattened area:

The ideal incident wavefront is plane; however, it can be easily deviated by phase shifts from the optical system and optical elements. Phase shifts from the optical system, such as thermal deformation and inhomogeneity of the medium, mainly contribute to dynamic wavefront deviation on a large spatial scale, which can be detected online by a Shack–Hartmann wavefront sensor. According to research carried out at Lawrence Livermore National Laboratory[Reference Wolfe and Lawson15, Reference Lawson, Auerbach and English16], the phase shifts from optical elements, as the main component of static wavefront deviation, can be divided into three spatial frequency regions: figure (

$s_{iy}$ are the spatial scales in the

The parameters of the analyzed large aperture high power short pulse model are those of the SG-II laser system[Reference Xu, Wang, Li, Dai, Lin, Gu and Zhu18]. A short pulse of 290 mm near-field diameter (ninth-order FGB) and 5 ps pulse width (Gaussian) at a center wavelength of 1053 nm is focused by an OAP of 800 mm focal length and 320 mm diameter. The two-step coordinate transformed focusing method is used, while the computer samples 2048 points in space from

$L$ is the key parameter of the simulation due to the two reasons mentioned above. Here, we use

$L=0.9997f{-}0.9999f$ to reach the requirements of both high resolution and the Fresnel approximation, then we obtain the convergence results.

First, the influence of intensity modulation on temporal contrast is analyzed. The model applied here is a ninth-order FGB with a diameter of 290 mm, and its near-field intensity is modulated randomly in three situations for which the FFs are 0.4, 0.6 and 0.8, respectively, as shown in Figure 2(a). The temporal profile of the incident pulse is Gaussian type with a pulse width (FWHM) of 5 ps. No wavefront deviation is introduced during the focusing propagation.

$10^{9}$ (blue dashed line). A pre-pulse can be seen 50 ps before the main pulse when the near-field intensity is modulated, which leads to a poor temporal contrast. Moreover, the front edge of the main pulse becomes moderate 10–20 ps ahead of the peak point, which means that the pulse width of the main pulse will be broadened at the same time. When the intensity is modulated by a FF of 0.6, the temporal contrast will be degraded by more than one order of magnitude to worse than

$10^{8}$ in the time window of 50 ps before the main pulse. The tendency can be seen from this figure that the smaller the FF of the modulated intensity is the worse the output temporal contrast is.

$T$ is 40 mm, which means that the same maximum spatial frequency is

$0.025~\text{mm}^{-1}$), the wavefront deviation with larger PV value will cause more severe temporal contrast degradation and in this spatial frequency range the temporal contrast will be two orders of magnitude worse than that of the ideal situation.

When the wavefront deviations have the same magnitude

$(\text{PV}=0.1{\it\lambda})$ but different spatial frequency ranges, as shown in Figure 3(b), there are large differences between the temporal contrast degradations. The wavefront deviation with the highest maximum spatial frequency of

$10^{4}$, while the wavefront deviation with the lowest maximum spatial frequency of

$1.6~\text{mm}^{-1}$ (red line; minimum spatial period of 0.625 mm) is quite notable within 40 ps before the main pulse; however, it becomes less significant beyond 40 ps before the main pulse. Therefore, higher spatial frequency contributes to temporal contrast degradation in a larger time window and for the same magnitude the wavefront deviation with low maximum spatial frequency has a slight influence on temporal contrast.

Third, the importance of discussing temporal contrast in a system with large diameter is demonstrated by analyzing the influence of diameter on temporal contrast degradation. In this case, introducing the same magnitude and same spatial frequency wavefront deviation as shown in Figures 4(a) and (b), we consider three models with different diameters: 320 (blue solid line), 160 (green solid line) and 80 mm (red solid line). The focal length is fixed at 800 mm.

$10^{10}$ in the model with 320 mm diameter without any near-field quality deterioration (cyan dashed line). However, for an ideal thin beam that does not need to be focused, the temporal contrast will be promoted to the computer simulation resolution limit, about

Finally, the simulation model is combined with the near-field quality measured in the established SG-II large aperture high power short pulse laser system. Figure 5(a) shows the experimental near-field intensity detected in the incident plane and Figure 5(b) shows the experimental intensity modulation (green solid line) and ideal spatial profile (blue dashed line) in one dimension. The calculated FF for the experimental near-field intensity modulation is 0.73. Figure 5(c) shows the experimental dynamic wavefront deviation detected online by a Shack–Hartmann wavefront sensor, which is unable to show waviness or roughness in the intermediate and higher frequency regions. Thus, in this case, no waviness and roughness are introduced into the simulation model. The experimental dynamic wavefront deviation in one dimension and its PSD curve are illustrated as the violet lines in Figures 5(d) and (e). After the propagation through the OAP focusing subsystem, the output temporal contrast can be obtained. In Figure 5(f), the cyan dashed line is the ideal output temporal contrast; the red solid line is the online experimental measurement result and the blue solid line is the calculation result. The online experimental measurement result[Reference Wang, Ouyang, Ma, Yuan, Xu and Qian19] shows a degraded temporal contrast of

$10^{4}$, while the calculation result shows a temporal contrast degradation of less than two orders of magnitude from

$10^{9}$. There are two reasons why the two results differ. (1) In this model beam quality is considered as the only influencing factor; however, in real experiments there are many other characteristics, such as ASE, PF and spectral modulation. (2) Only near-field intensity and low spatial frequency wavefront deviation are introduced, without considering waviness and roughness.

$3.7{\it\lambda}~\text{cm}^{-1}$ and the PSD curve is shown in Figure 5(e) by the green line. These values are gradually adjusted since there are no online measurement data for the system. After considering the waviness and roughness, there is serious temporal contrast degradation of more than three orders of magnitude from the temporal contrast degradation level due to only intensity modulation and low spatial frequency wavefront deviation. In addition, the assumption result has a similar trend to the online experimental measurement result, in spite of the discrepancy due to some other factors. From this point of view, high spatial frequency wavefront deviations, such as waviness and roughness, influence the temporal contrast more seriously; therefore, waviness and roughness deserve careful attention, and methods of measurement and control of the wavefront deviation within the abovementioned spatial frequency region should be investigated further.

The presented work is supported by the National High-Tech Committee of China (Grant no. 2013AA8044010).

Figure 1. The simulation algorithm of time and space focusing. 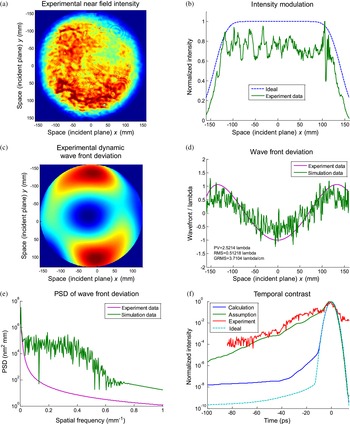