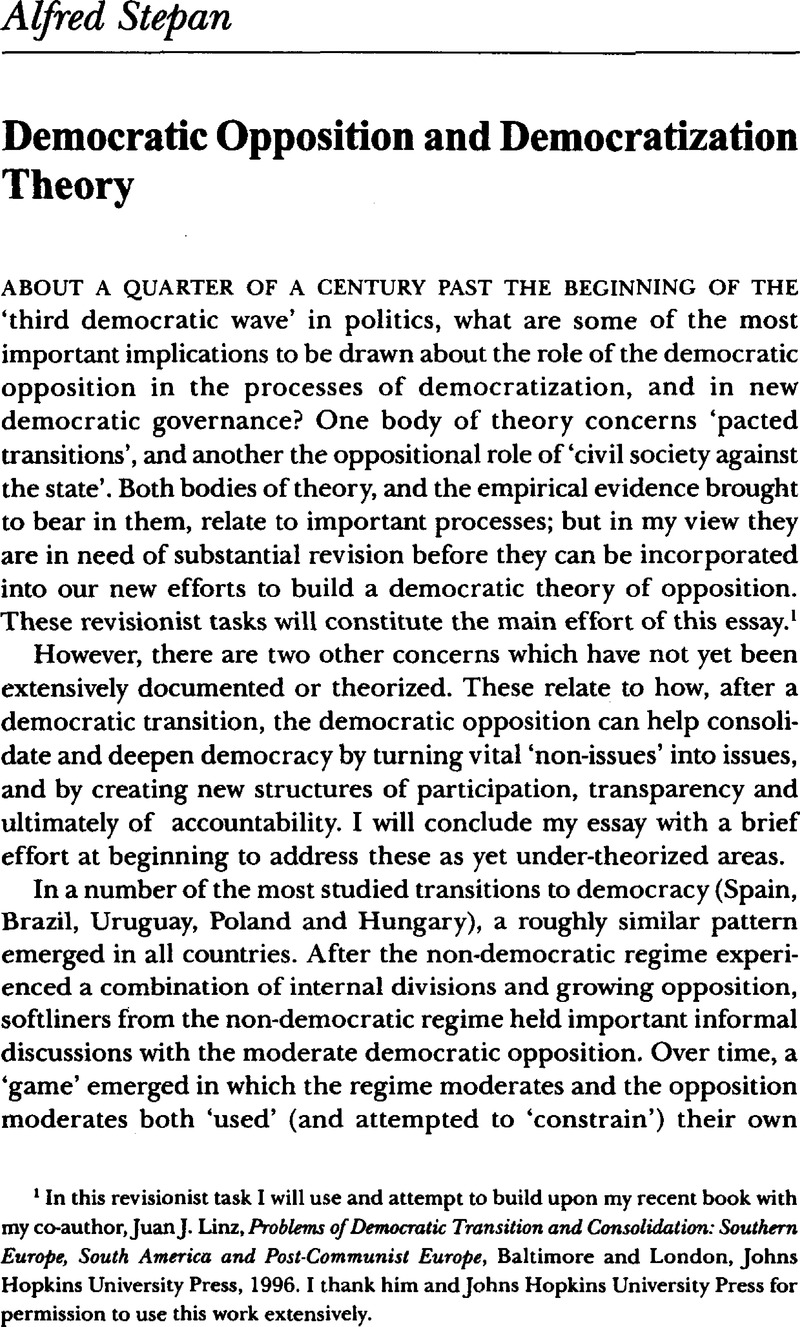 1 In this revisionist task I will use and attempt to build upon my recent book with my co‐author, Juan J., Linz, Problems of Democmtic Transition and Consolidation: Southern Europe, South America and Post‐Communist Europe , Baltimore and London, Johns Hopkins University Press, 1996. I thank him and Johns Hopkins University Press for permission to use this work extensively.

4 For a detailed analysis of the ‘totalitarian’, ‘post‐totalitarian’, ‘sultanistic’ and ‘authoritarian’ ideal types see Linz and Stepan, Problems of Democratic Transition and Consolidation, op. cit., ch. 3.

6 For example, the only Warsaw Pact country in 1988 not to have one opposition samizdat journal published in the country was Romania, a country that combined under Ceausescu strong sultanistic and totalitarian tendencies.

9 The revalorization of democracy by the Left produced a rich new genre of writings. For one such example see Weffort, Francisco., ‘Why Democracy?’ in Stepan, Alfred (ed.), Democratizing Brazil: Problems of Transition and Consolidation , New York, Oxford University Press, 1989, pp. 327–50.

10 By political society in a democratizing setting I mean that arena in which the polity specifically arranges itself to contest the legitimate right to exercise control over public power and the state apparatus. By civil society I refer to that arena of the polity where self‐organizing groups, movements and individuals, relatively autonomous from the state, attempt to articulate values, create associations and solidarities, and advance their interests.

11 For a discussion of the different meanings of civil society in various philosophical approaches and how it began to be used in Eastern Europe, see Cohen, Jean L. and Arato, Andrew., Civil Society and Political Theory , Cambridge, Mass., MIT Press, 1992. For a selection of different approaches and for a good essay on how civil society became central to the theory, practice and life of East European opposition movements, see Keane, John (ed.), Civil Society and the State , London, Verso, 1988. A revisionist critique of civil society is now emerging. See e.g., the chapter arguing that civil society was the ‘last ideology of the old intelligentsia’, in Klaus von Beyme, Systemwechsel in Osteuropa, Frankfurt am Main, Suhrkamp, 1994, pp. 100–23.

13 The theme of ‘ethical civil society’ is developed in Piotr Ogrodzinski., ‘The Four Faces of Civil Society’, Warsaw, 1991, unpublished manuscript.

14 David Ost argues that a significant part of the Polish opposition ‘rejected the state not just because it could not win there, but also because it did not want to sin there… This opposition did not want to possess power so much as to abolish it… So “anti‐politics” is not just the necessary rejection of the state, but also the deliberate rejection of the state, the belief that what is essential to a just order is not a benign government and good people in power, but rather a vital, active, aware, self‐governing and creative society’. David Ost., Solidarity and the Politics of Anti‐Politics: Opposition and Reform in Poland since 1988, Philadelphia, Temple University Press, 1990, p. 2.

15 On the collapse of Solidarity as a political force and the eventual weakening of the civil society in Poland, see the two articles by Aleksander Smolar., who played a key role in ‘civil society in opposition’ and later was involved in the difficult task of building an effective political society in such a context. See his ‘A Communist Comeback? The Dissolution of Solidarity’, Journal of Democracy, Vol. 5, No. 1, January 1994, pp. 70–84; and his ‘Civil Society after Communism: From Opposition to Atomization’, Journal of Democracy, Vol. 7, No. 1, January 1996, pp. 24–38.

16 For his argument that the sharp ‘civil society versus the state’ dichotomy is empirically a rare exception in communist systems and that the norm is infiltration and manipualtion of the party‐state by counterforces or reformists within the state, see Deng, X. L., ‘Institutional Amphibiousness and the Transition from Communism: The Case of China’, British Journal of Political Science , Vol. 24, 07 1994, pp. 293–318.

17 Some of Hungary’s most important and influential analysts who are now seen as sociologically part of the historical movement of the opposition were in fact for much of the 1970s and early 1980s occupying key administrative and/or advisory positions inside the state and should technically be seen as ‘amphibians’. If we accept Deng’s terminology, one of the most influential ‘amphibians’ was János Kornai, who ‘reframed’ existing concepts of what was likely and unlikely in the area of economic reforms. Much of the argumentation and documentation in his classic book, The Socialist System: The Political Economy of Socialism, Princeton, Princeton University Press, 1992, about the limits of market reform with a state led by a communist party were widely circulated among communist party officials for a decade before 1989 and contributed to making some party leaders ‘moderates’; and eventually, to making the ‘moderate players’, the dominant player within the regime.

19 For these interviews and a more extensive analysis and documentation, see my chapter ‘Abertura: Intra‐state Conflicts and the Courtship Society’, in Rethinking Military Politics: Brazil and the Southern Cone, Princeton, Princeton University Press, 1988, pp. 30–44. Also see my article ‘State Power and the Strength of Civil Society in the Southern Cone of Latin America’, in Evans, , Dietrich Rueschemeyer, Peter B. and Skocpol, Theda (eds), Bringing the State Back In, Cambridge, Cambridge University Press, 1985, pp. 317–46.

20 For this interview and an analysis of the unforeseen consequences of elections in the Republics, see Linz, and Stepan, Problems of Democratic Transition and Consolidation, ch. 19. Also see our article, ‘Political Identities and Electoral Sequences: Spain, the Soviet Union, and Yugoslavia’, in Daedalus, Vol. 121, No. 2, Spring 1992, pp. 123–40.

21 Indeed Aryeh Neier, in his forthcoming book on trials for crimes against humanity, argues that the first major advance against impunity since the Nuremberg Trials was probably in Argentina and that this had a direct influence on the Tribunal in The Hague for crimes against humanity committed in Bosnia and Rwanda, and the trials in South Korea which led to the conviction and imprisonment of the last two military presidents.

22 The efficaciousness of these socially engineered structures of opposition to corruption have already had some ‘demonstration effects’. The World Bank has begun to re‐evaluate its system for loans and grants in the area of regional environmental projects. The chief World Bank official in charge of such loans in Brasilia told me in December 1996 that until they began to emulate Brazil’s education experiment it was difficult for the World Bank to account for even 50% of its dispersed funds, but that with the new system of ‘participation’, ‘transparency’ and ‘accountability’, in a new forest project the World Bank was funding, it could account for over 90% of the dispersed funds. Just as important, the project was achieving most of its social and economic objectives. An excellent economist of the Hirschman school, Albert O., Tendler, Judith, has published a book that addresses such issues. See her Good Government in the Tropics, Baltimore and London, Johns Hopkins University Press, 1996.

Government and Opposition
×
Powered by UNSILO