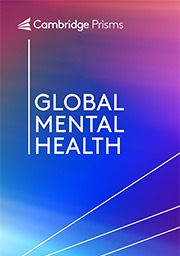 This study investigated whether subjective unrest-related distress was associated with probable depression during and after the 2019 anti-ELAB movement in Hong Kong.

Unrest-related distress was positively associated with probable depression across different numbers of conflicts/protests.

Unrest-related distress is a core indicator of probable depression. Public health interventions should target at resolving the distress during seemingly peaceful period after unrest.

In 2019, a controversial bill was introduced by the Hong Kong SAR Government for extraditing individuals accused of crimes to countries/regions which do not have a legal mechanism for doing so. The resultant anti-extradition law amendment bill (anti-ELAB) movement gradually escalated from peaceful demonstrations into massive violence and vandalism since June 2019. Protests diminished in early 2020 due to the coronavirus disease 2019 (COVID-19) but mounted again in May–June 2020 due to the hasty introduction of the National Security Law. The movement involved approximately 2000000 participants lasting over months, leaving serious mental health consequences (Holbig, Reference Holbig2020; Turnbull et al., Reference Turnbull, Watson and Jin2020). The prevalence of depression rose from 1.9% a decade ago to as high as 25% in the heat of the movement (Ni et al., Reference Ni, Yao, Leung, Yau, Leung, Lun, Flores, Chang, Cowling and Leung2020; Hou et al., Reference Hou, Hall, Liang, Li, Liu and Galea2021). Given that depression forms one of the heaviest public health burdens and elevates the suicidal risks (WHO, 2021), it is pressing to further elucidate its development and maintenance under potentially traumatic events such as social unrests.

Table 1. Descriptive information of the current sample at the four timepoints (N = 7157)

b The number of conflicts/protests (i.e. ‘exposure to unrest’ events) at each timepoints is presented.

c Scores of 10 or above in the 9-item Patient Health Questionnaire (PHQ-9) were used to define probable depression.

Respondents rated nine items on depressive symptoms over the past two weeks on a 4-point scale (0 = not at all, 1 = on several days, 2 = on more than half of the days, 3 = nearly every day) using the Chinese version 9-item Patient Health Questionnaire (PHQ-9) (Yeung et al., Reference Yeung, Fung, Yu, Vorono, Ly, Wu and Fava2008). Higher scores (range = 0–27) indicated higher levels of depressive symptoms. Scores of 10 or above indicated probable depression (Levis et al., Reference Levis, Benedetti and Thombs2019). Cronbach's alphas were 0.842, 0.854, 0.850 and 0.827 across the four administrations respectively.

Respondents rated to what extent they felt distress over (1) the government's handling of unrest, (2) confrontations between police and protestors, and the use of riot control measures such as physical assault, tear gas, and rubber bullets, and (3) widespread and ongoing demonstrations and protests on a 4-point scale (0 = not at all, 1 = some, 2 = quite a bit, 3 = a lot). Scores of each item were recoded into low (0) and high (1), with low indicating ‘not at all’/‘some’ in all three items and high indicating ‘quite a bit’/‘a lot’ in at least one item. Binary coding of distress relating to large-scale disasters demonstrated statistical sensitivity in detecting important mental health problems in previous studies (Bonanno et al., Reference Bonanno, Galea, Bucciarelli and Vlahov2007; Hou et al., Reference Hou, Li, Liang, Liu, Ettman, Hobfoll, Lee and Galea2022).

Exposure to unrest was quantified as the number of conflicts/protests occurred during the past month at each timepoint. Event count has been widely used to reflect the objective levels of traumatic stress across previous studies. For example, evidence showed good predictive utility of the number of traumatic events on PTSD among a post-conflict population (Wilker et al., Reference Wilker, Pfeiffer, Kolassa, Koslowski, Elbert and Kolassa2015) and first responders (Geronazzo-Alman et al., Reference Geronazzo-Alman, Eisenberg, Shen, Duarte, Musa, Wicks, Fan, Doan, Guffanti, Bresnahan and Hoven2017). The number of events related to the anti-ELAB movement from June 2019 to July 2020 was extracted from the Armed Conflict Location and Events Dataset (ACLED) (Raleigh et al., Reference Raleigh, Linke, Hegre and Karlsen2010). ACLED is a database of real-time data on political violence and protest events across the globe. We adopted strict inclusion criteria for data extraction, and counted events as valid only if (1) the item description contained keywords like ‘name of the unrest’ and ‘slogans’ and ‘event name’ related to the anti-ELAB movement and (2) the item involved conflicts/protests as categorized in ACLED. Duplicates were excluded. Event count was the approximate of the potential level of exposure individuals could possibly encounter at that timepoint.

COVID-19 stress (T2–T4) was measured with worry for infection or health-related threat, which were further recoded into low (0) and high (1). For details, see Hou et al. (Reference Hou, Li, Liang, Liu, Ettman, Hobfoll, Lee and Galea2022). All T1 respondents were assigned a score of 0.

Table 2. Logistic regression examining the association of unrest-related distress with probable depression, stratified by the number of conflicts and protests across the four timepoints (N = 7157)

a Scores of 10 or above in the 9-item Patient Health Questionnaire (PHQ-9) were used to define probable depression.

c The number of conflicts/protests (i.e. ‘exposure to unrest’ events) at each timepoint is presented in bracket.

Our current results are consistent with not only the conclusion that subjective perceptions of traumatic incidents explain depressive symptoms independent of objective lifetime exposure to these incidents (Boals, Reference Boals2018) but also the notion that mental health consequences following exposure to potentially traumatic events might be fairly minimal in the absence of negative subjective appraisals (Maschi et al., Reference Maschi, Morgen, Zgoba, Courtney and Ristow2011; Danese and Widom, Reference Danese and Widom2020). There is evidence showing that only a fraction of objective traumatic events was subjectively experienced by individuals, suggesting a discrepancy between objective events and subjective experiences amid trauma (Creamer et al., Reference Creamer, McFarlane and Burgess2005; Maschi et al., Reference Maschi, Morgen, Zgoba, Courtney and Ristow2011; Boals, Reference Boals2018). A previous study involving burn survivors found that individuals could experience intrusive memories two years after the accident exposure, and whether they cognitively appraised these memories in a negative way was related to the severity of both depressive and PTSD symptoms, over and beyond the adverse consequences brought by burn-related disabilities (Su, Reference Su2018). Our current results are generally in line with this. While the trends of depression and number of conflicts/protests were relatively independent, the positive association between unrest-related distress and probable depression remained significant irrespective of the exact numbers of conflicts/protests across time, providing further supportive evidence that mental health during and after political unrest is dependent upon subjective experiences, regardless of objective criteria defining traumatic incidents (e.g. intensity of protests).

Our study has some limitations. First, repeated cross-sectional data could reflect population-level but not intra-personal changes in unrest-related distress and probable depression as the civil unrest unfolded. Second, the current objective measure of conflicts/protests did not take into account heterogeneity in the nature and intensity across these incidents, or individual differences in the actual exposure to conflicts/protests. Finally, probable depression was based on self-report. Future studies would demonstrate a clearer picture of depression using clinical diagnoses/interviews. Notwithstanding the limitations, this study has built upon our own work and further investigated the subjective versus objective pillars of mental health impact following acute traumatic exposures. Accurate screening and effective interventions are needed to complement the existing already-overloaded mental health care system (Galovski et al., Reference Galovski, Peterson, Beagley, Strasshofer, Held and Fletcher2016; Hou and Hall, Reference Hou and Hall2019; Hou et al., Reference Hou, Li, Liang, Liu, Ettman, Hobfoll, Lee and Galea2022). The main implication of the current study is that high unrest-related distress could be one core component of continuous mental health assessment and interventions irrespective of the presence/absence of actual incidents. Its utility could last from the acute phase of the unrest to the seemingly peaceful time after the unrest.

This work was supported by the Policy Innovation and Co-ordination Office, Hong Kong SAR Government [grant number SR2020.A5.019]; and the Research Grants Council, University Grants Committee, Hong Kong SAR, China [grant numbers C7069-19 GF, 18600320]. The funding source had no role in any process of our study.

Table 1. Descriptive information of the current sample at the four timepoints (N = 7157)

Table 2. Logistic regression examining the association of unrest-related distress with probable depression, stratified by the number of conflicts and protests across the four timepoints (N = 7157)