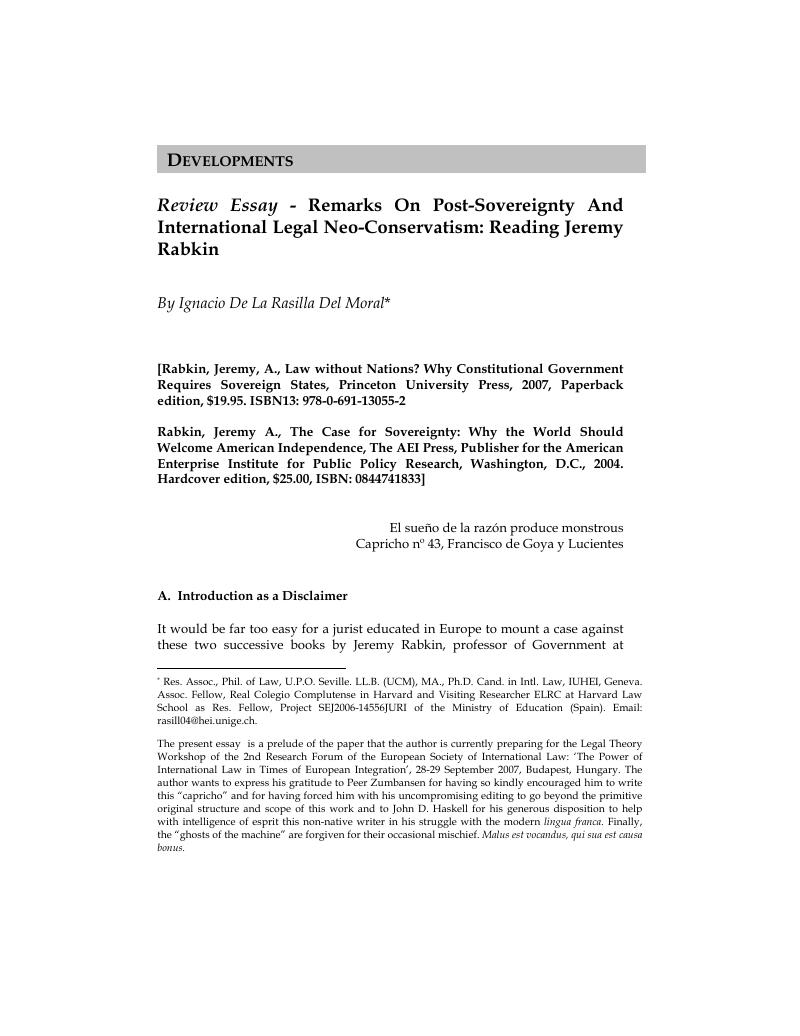 2 Jeremy A. Rabkin, The Case For Sovereignty: Why The World Should Welcome American Independence (2004).

11 “But a number of nations have viewed themselves as, in some way, a new Israel- distinctive, luminous, faithful to some special destiny” Rabkin (note 6), 11. This remark concludes two pages of text in which the author does not spare his readers of interpretations of the Hebrew bible according to which the Babel's resulting “division of mankind was, in some way, necessary or providential” Rabkin (note 4), p.8-10.

14 Both successive books evidenced to be addressed to appeal an American audience already sympathetic with its underlying postulates. Unadvised foreigners, but specially Europeans, are likely to soon find themselves forcing to adopt a sociological external perspective in view of its ultra-nationalistic tone.

25 171 states of the world -including Russia, China and India- have already ratified the 1997 Kyoto Protocol, http://unfccc.int/2860.php (last acceded 16th May, 2007) Note, furthermore, the developments occurred in the June 2007 G8 Summit concerning this issue.

36 “Many scholars thus seem to embrace post-modernism with the exuberance of adolescents, discovering that sex is a lot more appealing and lot more available than they had realised as children,” Rabkin (note 2), 15.

41 A brief comment by Rabkin on that debate can be found as Jeremy A Rabkin Reaction for Notre Europe to Andrew Moravcskik's article: “What can we learn from the Collapse of the European Constitutional Project?, Notre Europe Etudes & Recherches, (October 2006) at http://www.notre-europe.eu/uploads/tx_publication/Moravcsik-ReponseRabkin-en_01.pdf (last acceded, 16th May, 2007).

46 For a good sample of the debate, see the “Agora: Is the Nature of the International Law System Changing”, 8 Austrian Review Of International And European Law, (2003).

49 It should be noted that I am not attempting to trace with this remark a parallelism with what mutatis mutandi David Kennedy has defined as the “dark sides, unjustified biases and blind spots” of humanitarian thinking. See David Kennedy, El Lado Oscuro De La Virtud, (trans. prel. essay by Francisco J Contreras and Ignacio de la Rasilla) 2007.

58 “Rabkin's is a serious statement of all that cosmopolitanism and post-modern humanism must overcome in their quest for a more just global order”, Paul Carrese, Review of Law Without Nations 16 Law And Politics Book Review, 182 (February 2006), http://www.bsos.umd.edu/gvpt/lpbr/subpages/reviews/rabkin0206.htm (last acceded, 14th May, 2007) Prof. Carrese's review constitutes a balance attempt to analyse the originalist constitutional approach of the book from a his “own scholarship” which “lies closer to Rabkin's perspective of originalism” insofar as “Rabkin elaborates the minority view on law and government among American and European academics” by stressing and engaging with the analysis of the libertarian philosophical foundations of the book.

60 In justifying US’ unilateralism through the exemplification of the absolute lack of faith that one should posed in the UN in light e.g. of Rwanda's genocide, “The UN official responsible for withdrawing the peacekeepers, Kofi Annan, was later promoted to secretary-general, and was subsequently awarded a Nobel Peace Prize – for peacekeeping! Rabkin (note 2), 84.

64 e.g. AI's campaign against capital punishment in the US vs withholding of comment about mass murder in Cambodia, Rabkin (note 4), 176.

65 “Is the perfect motto for advocates and institutions that take pride in answering to no one” Rabkin (note 4), 188.

66 “That could mean that “fundamental elements of American domestic law would, in effect, be made in international forums or in other countries and then simply appropriated by American judges” Rabkin (note 4), 23.

68 The ICC, perhaps the single front to which more references are to be found in both books, is one of the black beasts of NIL. Rabkin's attacks on the ICC do not stop in subtitles: “Europeans are drawn to relativizing abstractions. For Germans, the ICC promises to “overcome the past,” by licensing German judges to try Americans and Israelis for war crimes”. Note, however, that such a remark is not an isolated passage in one of the books under review or even a discreet footnote, but it makes part of the abstract itself of Jeremy Rabkin, World Apart on International Justice 15 Leiden Journal Of International Law, 835 (2002).

The present essay is a prelude of the paper that the author is currently preparing for the Legal Theory Workshop of the 2nd Research Forum of the European Society of International Law: ‘The Power of International Law in Times of European Integration’, 28-29 September 2007, Budapest, Hungary. The author wants to express his gratitude to Peer Zumbansen for having so kindly encouraged him to write this “capricho” and for having forced him with his uncompromising editing to go beyond the primitive original structure and scope of this work and to John D. Haskell for his generous disposition to help with intelligence of esprit this non-native writer in his struggle with the modern lingua franca. Finally, the “ghosts of the machine” are forgiven for their occasional mischief. Malus est vocandus, qui sua est causa bonus.