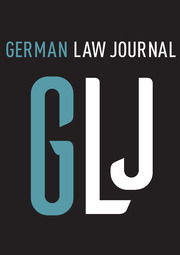 The Constitution of Europe: the new Kulturkampf? 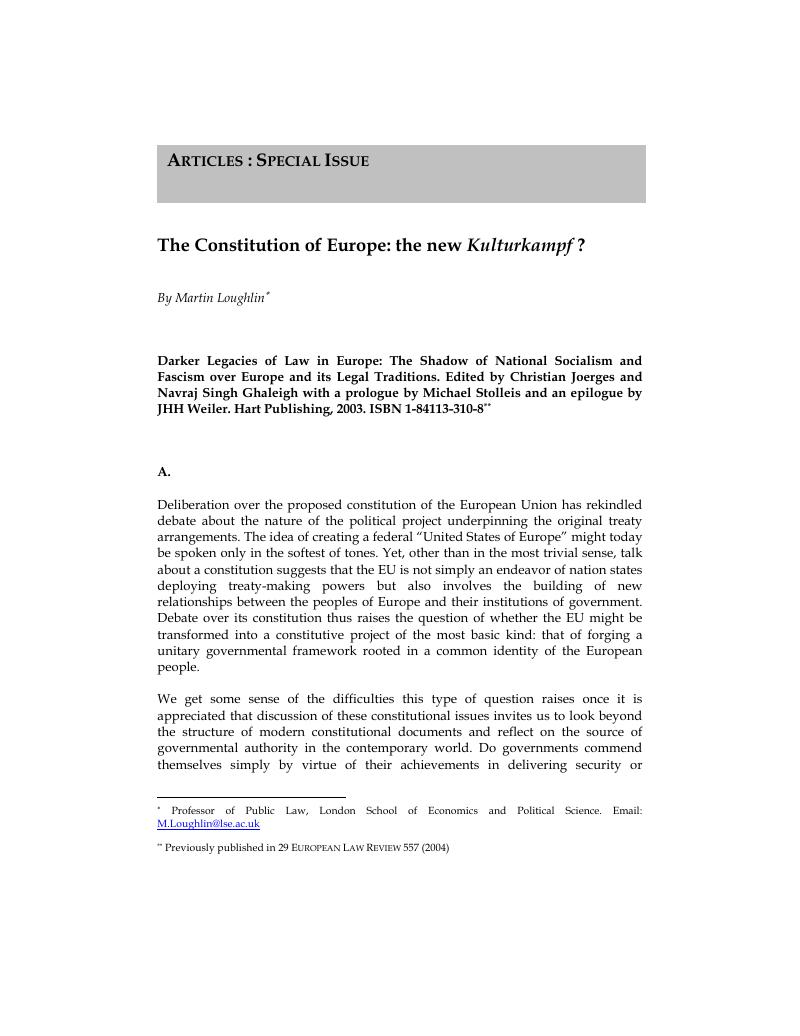 An abstract is not available for this content so a preview has been provided. To view the full text please use the links above to select your preferred format.
Type
Review Article
Information
German Law Journal , Volume 7 , Issue 2: Special issue - European Integration in the Shadow of Europe's Darker Pasts: The “Darker Legacies of Law in Europe” revisited , 01 February 2006 , pp. 173 - 190
DOI: https://doi.org/10.1017/S2071832200004545[Opens in a new window]
Copyright
Copyright © 2006 by German Law Journal GbR

1 The opposition between west and east was also an important theme in ancient Greek writing: see Anthony Pagden, Europe: Conceptualizing a Continent in The Idea of Europe from Antiquity to the European Union, ch.1, (Pagden ed., 2002)Google Scholar

6 Id., 30. Neil Walker therefore writes too loosely when referring to “the relentless Nazi emphasis on the primacy of the political”. See Neil Walker, From Großraum to Condominium, in Darker Legacies Of Law In Europe, 193, 199 (Christian Joerges/Navraj Singh Ghaleigh eds., 2003). Since Nazism was unable to generate a sustainable dynamic between “the people” and their institutions of government, it is better characterized as a regime marked by the absence of politics rather than the primacy of the political.Google Scholar

11 See, e.g. Carl Schmitt, Legality And Legitimacy (Jeffrey Seitzer trans., 2004). In case this concern seems foreign to British scholars, it might be pointed out that, as a standard practice, the British conferred parliamentary constitutions on their former colonies throughout the twentieth century only to see that within relatively short periods these were invariably transformed into presidential systems, and often in conjunction with the formation of a one-party state.Google Scholar

12 Voegelin (supra, note 9), 74. See Mussolini's famous phrase: “Everything for the state, nothing outside the state, nothing against the state”, cited in Julius Stone, Theories of Law and Justice of Fascist Italy, 1 Modern Law Review 177, 193 (1937)Google Scholar

16 It might also be noted that the Austrian model garnered some support from PIUS XI's, QUADRAGESIMO ANNO encyclical (1931), which not only promoted the idea of the corporative organization of society but also (80) recommended the principle of subsidiarity.Google Scholar

17 See Van Caenegem (supra, note 7), 120-6. He asks, rhetorically: “am I having a hallucination or were there in fact two different men with the same name?” (121)Google Scholar

21 Stolleis, Michael, Prologue: Reluctance to Glance in the Mirror. The Changing Face of German Jurisprudence after 1933 and post-1945, in Darker Legacies Of Law In Europe, 1, 1 (Christian Joerges/Navraj Singh Ghaleigh eds., 2003)Google Scholar

36 His despicable behavior includes that of chairing of an infamous conference on “Jewry in Legal Studies” in 1936, which called “for a ‘cleansing’ of minds and libraries” (Id., 257) and the publication of a paper, “The Führer Protects the Law” (1934), which “gave its blessing to a piece of gangsterism and ruined the moral reputation of its author” (Id., 335).Google Scholar

50 This is the main theme of Carl Schmitt, Legality And Legitimacy (supra, note 11)Google Scholar

54 On this issue, we might note the similarities between the authoritarian liberalism of Hayek and Schmitt, which are well drawn in Renato Cristi, Carl Schmitt And Authoritarian Liberalism ch.7 (1998)Google Scholar

56 Cited in Eley (supra, note 55), 193. Eley also cites the Orwellian language used by Michael Stürmer: “In a land without history, whoever fills the memory, defines the concepts and interprets the past, wins the future.” (Id., 194)Google Scholar

59 Habermas, Jürgen, A Kind of Settlement of Damages: the Apologetic Tendencies in German History Writing, in Forever In The Shadow Of Hitler?, 30, 43 (James Knowlton/Truett Cates trans., 1993): “The unconditional opening of the Federal republic to the political culture of the West is the greatest achievement of the postwar period.”Google Scholar

65 See Habermas, Jürgen, The Limits of Neo-Historicism, in Autonomy and Solidarity, 238 (1992)Google Scholar

66 See Jens Barelson, The Critique Of The State (2001)Google Scholar

The Constitution of Europe: the new Kulturkampf?
×

The Constitution of Europe: the new Kulturkampf?
×

The Constitution of Europe: the new Kulturkampf?
×
×