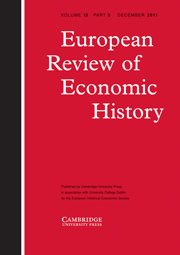 When did globalisation begin?

Some world historians attach globalisation ‘big bang’ significance to 1492 and 1498. Such scholars are on the side of Adam Smith who believed that these were the two most important events in recorded history. Other world historians insist that globalisation stretches back even earlier. There is a third view which argues that the world economy was fragmented and completely de-globalised before the early nineteenth century. None of these three competing views has distinguished explicitly between trade expansion driven by booming import demand or export supply, and trade expansion driven by the integration of markets between trading economies. This article makes that distinction, and shows that there is no evidence supporting the view that the world economy was globally integrated prior to the 1490s; there is also no evidence supporting the view that this decade had the trading impact that world historians assign to it; but there is abundant evidence supporting the view that a very big globalisation bang took place in the 1820s.

‘The year 1500 marks an important turning point in world history . . . The European discoveries made the oceans of the earth into highways for their commerce . . .’ William H. McNeill 1999, p. 295.

When did globalisation begin?
×

When did globalisation begin?
×

When did globalisation begin?
×
×