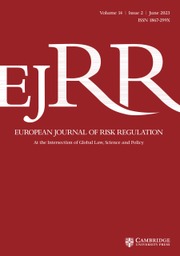 Between Politics and Expertise: An Italian Perspective on Constitutional Law and Scientific Legitimacy

The dialectic between the technically (or scientifically) possible and the legally possible, which is implied in decision-making in conditions of uncertainty, raises crucial issues from a constitutional perspective. In particular, the emergence of a new factor of legitimacy – which could be envisaged as a form of “scientific legitimacy” – can be detected and needs to be integrated within the constitutional discourse.

Through an overview of the case law of the Italian Constitutional court, the paper aims at highlighting the possible approaches to the need of a deeper integration of technical and scientific knowledge within the public decision-making processes, in an attempt to strike a balance capable of avoiding the two extremes of scientifically weak decisions on one hand, and of “technical deference” to experts on the other.

2 See, in similar terms, Elizabeth Fisher, supra note 1, at p. 246: “decision-making [is] a mix of expertise and democracy, science and values, and politics and knowledge. It has not been the case that there has been a stark choice to be made between ‘science’ and ‘democracy’, as all decision-making regimes encompass the two”.

6 For an exemplification of some of the features characterising the “ingenuous” attitude of the legal sphere towards science, see Artosi, Alberto, “Reasonableness, Common sense, and Science”, in Bongiovanni, Giorgio, Sartor, Giovanni, Valentini, Chiara (eds), Reasonableness and Law, (Dordrecht: Springer, 2009), pp. 69 et sqq., at pp. 74-78CrossRefGoogle Scholar.

7 Tallacchini, Mariachiara, “Legalising Science”, in 10 Health Care Analysis (2002), pp. 329 et sqq, at p. 329CrossRefGoogle ScholarPubMed. Notable exceptions need to be mentioned as well: among these see in particular Schmitt, Carl, “The age of neutralizations and depoliticizations” (1929), in Schmitt, Carl, The concept of the ‘political’. Expanded edition, (Chicago: The University of Chicago Press, 2007), pp. 80 et sqq Google Scholar, according to whom “technology is always only an instrument and weapon; precisely because it serves all, it is not neutral. No single decision can be derived from the immanence of technology, least of all for neutrality” (at p. 91).

9 Hence the problems related to if and to what extent to intervene by means of regulation. On the tension between self-organisation and the government of purpose, in relation to science and technology, see Borrás, Susana, “Three tensions in the governance of science and technology”, in Levi-Faur, David (ed.), Oxford handbook of governance, (Oxford: Oxford University Press, 2012), at pp. 431 et sqq Google Scholar. The Author highlights how such an arrangement is currently being put under pressure by the “changing societal expectations about the role of science in society. The traditional ‘social contract for science’ is based on an unveiled positive view of science as an ‘ivory tower’, in the expectation that science produces reliable knowledge and communicates it to society in a one-way fashion. Dissatisfaction with the ‘ivory tower’ means that the old ‘social contract’ is giving way to a new contract, the shape of which is still not clear”. Further tensions are determined by the emergence of new kinds of governmental involvement in science and technology policy and by the issues presented by the ownership (and commodification) of technical and scientific knowledge.

10 Such shift is embodied by the co-production paradigm theorised by Sheila Jasanoff, supra note 1.

12 Such issues have alternatively been defined as “trans-scientific”: issues which “can be stated in the language of science but are, in principle, or in practice, unanswerable by science” (Giandomenico Majone, “Foundations of Risk Regulation: Science, Decision-Making, Policy Learning and Institutional Reform”, in 1 European Journal of Risk Regulation (2010), at pp. 5 et sqq, at p. 5.

13 For example, when it comes to identifying the exact threshold above which carcinogenic substances have adverse effects on humans. Uncertainty can also be related to the time factor, as in cases of urgency, when a decision needs to be taken before the relevant data is available, or when it is not yet possible to fully determine the consequences related to the use of a technology (e.g. because it is still being developed).

15 As Fisher, Elizabeth, supra note 1, at pp. 9–10 Google Scholar observes, “the state and its conceptual baggage”, although “much maligned, are still the starting points for conceptualising this area of decision-making. In part this has to do with the fact that it is only sovereign states that have the innate power to regulate risk …”.

24 Decision n. 114/1998. A similar statement can be found also in a more recent decision (n. 342/2006) concerning GMOs, where the Court allowed Parliament “a wide margin of discretion in determining the content which appears to be more appropriate to the achievement of the relevant statutory aims, so that a legislative provision can be found to be unconstitutional only when the level of uncertainty of the scientific evidence on which it is based is so significant to determine the arbitrariness or the irrationality of the provisions under review”.

28 Cases will not be grouped chronologically but rather following a substantial criteria. It has to be kept in mind that those analysed do not represent the entirety of the cases in which the Constitutional Court has dealt with scientifically controversial issues: for a broader overview, see Ainis, Michele, “Le questioni scientifiche controverse nella giurisprudenza costituzionale”, in D’Aloia, Antonio, supra note 18, at pp. 23 Google Scholar et sqq.

38 Law n. 57 of 23 May 2013, converting the decree n. 24 of 25 March 2013, which had temporarily allowed for the continuation of all those treatments which had already begun – for an overview of the “Stamina case” see Antonio Scalera, “Brevi note a margine del ‘caso Stamina’”, 10 Famiglia e diritto (2013), at pp. 939 et sqq; see also D’Amico, Giacomo, “Il volto compassionevole del diritto e la dura scientia ”, 2 Quaderni Costituzionali (2013), at pp. 420 Google Scholar et sqq. The clinical trial was not completed due to the impossibility of even considering the treatment as a therapy. The claim was dismissed by decision n. 274/2014.

39 The treatment was being supplied by the Hospital of Brescia, when an injunction adopted by the Italian Medical Agency (AIFA) prohibited its continuation due to the lack of evidence concerning the treatment's effectiveness.

40 Beyond the national boarders, see the debate on Nature, available on the Internet at http://www.nature.com/news/italian-stem-cell-trial-based-on-flawed-data-1.13329 accessed 27 January 2016.

42 The same provision was found by the European Court of Human Rights (hereinafter ECtHR) not to be in contrast with the right to health as protected by art. 8 and 14 ECHR in the case Durisotto v. Italy (application n. 62804/13), ECHR 152(2014) 28.05.2014: recalling Hristozov and others v. Bulgaria (nn. 47039/11 and 358/12, ECHR 2012) the ECtHR considered that on the one hand States enjoy a wide margin of appreciation when establishing restrictive criteria for the access to compassionate therapies (see also Evans v. United Kingdom [GC], n. 6339/05, ECHR 2007 I and S.H. and others v. Austria [GC], n. 57813/00, ECHR 2011); on the other hand that it is not for the international jurisdiction to reconsider the competent national authorities’ evaluations (i.e. technical-scientific institutions) concerning the acceptable level of risk for patients in order to have access to therapies undergoing clinical trials.

50 At international level, the blanket-ban on pre-implantation diagnosis was found by the ECtHR to be in contrast with art. 8 ECHR in Costa and Pavan v. Italy (application n. 54270/10). See in particular paras. 68-69, where the ECtHR states that, although the provision has moral and ethical implications, on which States normally enjoy a wide margin of appreciation, what is to be decided is whether it is proportionate, in relation to the legal system as a whole (and thus also in relation to the possibility of therapeutic abortion).

51 On the ban on third-party gamete donations see also the ECtHR decision in S.H. and others v. Austria (application n. 57813/00).

56 Such a conclusion is suggested also by the circumstance that each of the three assumptions on which it relies can be found, separately or combined, and perhaps less explicitly formulated, in relation to issues belonging to different branches of the legal system, in particular with regard to the autonomy and importance of technical-scientific institutions. See, for example, decision n. 116/2006.

61 Simone Penasa, supra note 48, at p. 308. The Author also envisages a third function: “a legitimacy one, as [expertise involvement] guarantees at least a presumption of legitimacy in favour of political decisions when checked in the light of a constitutional framework”.

Between Politics and Expertise: An Italian Perspective on Constitutional Law and Scientific Legitimacy
×

Between Politics and Expertise: An Italian Perspective on Constitutional Law and Scientific Legitimacy
×

Between Politics and Expertise: An Italian Perspective on Constitutional Law and Scientific Legitimacy
×
×