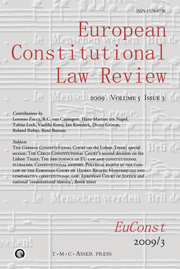 Comments on the German Constitutional Court's Decision on the Lisbon Treaty