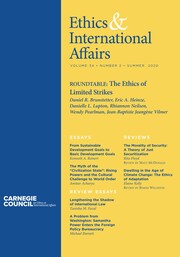 Roundtable: The Ethics of Limited Strikes