The Players and the Game of Sovereign Debt 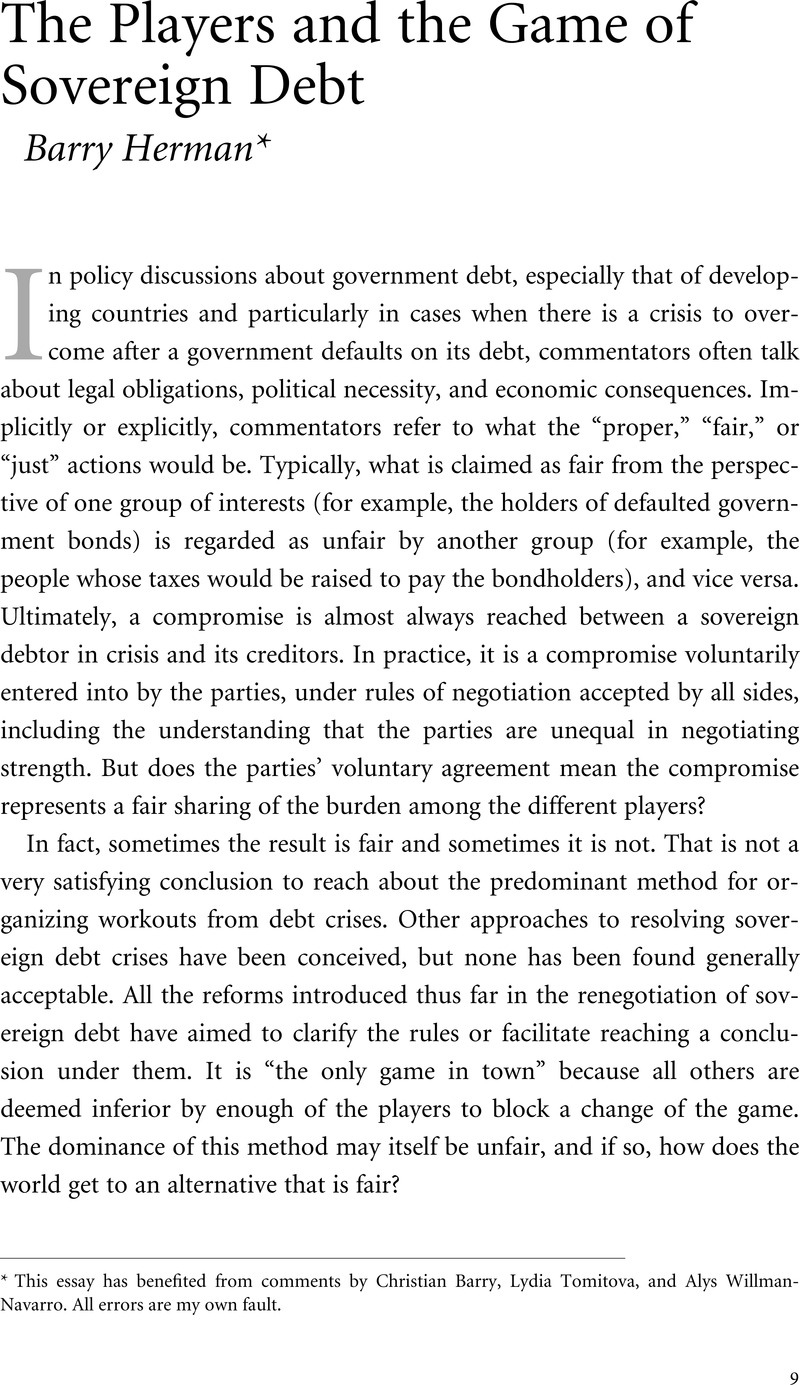 An abstract is not available for this content so a preview has been provided. Please use the Get access link above for information on how to access this content.
Type
Part I: The Matter of Fairness in Developing Country Debt
Information
Ethics & International Affairs , Volume 21 , Issue S1: Dealing Fairly with Developing Country Debt , November 2007 , pp. 9 - 39
DOI: https://doi.org/10.1111/j.1747-7093.2007.00083.x[Opens in a new window]
Copyright
Copyright © Carnegie Council for Ethics in International Affairs 2007

1 In the United States and the United Kingdom, where most international borrowing is arranged, sovereign governments are considered immune from lawsuits except when they engage in “commercial activity.” Government borrowing is considered such an activity (and explicit waivers of sovereign immunity are standard clauses in loan or bond contracts). This only means, however, that a private creditor can sue a sovereign debtor in court in New York or London. Winning a settlement is rare, and collecting on it is far rarer still.

2 It is widely held that taxpayers are justified in insisting on government regulation and supervision of privately owned banks in a market economy precisely because of this contingent claim on them owing to the essential public service that banks provide. The concern is that the failure of a single bank not spook confidence in banks in general and provoke a systemic crisis. This is an additional argument to the perhaps more standard one that deposit insurance should be coupled with official supervision to reduce the claims on the insurance fund from failed banks.

3 The exception is a small loan of essentially the country's own foreign-currency membership payment, called the “reserve tranche.”

4 In light of the greater complexity and speed of banking transactions today, regulators have increasingly focused oversight on the methods (“models”) used for risk management instead of the contents of a given loan portfolio itself at the moment of the regulators’ visit, especially for the larger, internationally active banks.

5 Vulnerability to pressure to continue lending is especially the case for banks that are government owned, many of which still exist in developing countries.

6 This only ended after shareholders in the banks and regulators increasingly expressed alarm about the “distressed debt” the banks were holding half a decade after the crisis began and the Brady Plan developed a mechanism under which banks agreed to accept less than face value on their loans. Many of the banks then ceased to make further such loans to governments.

7 The risk-free rate was typically the rate that the major banks charge each other for loans in London, the world's deepest financial market. As sovereign bank loans usually paid interest semiannually, the interest rate would be calculated as the six-month London inter-bank offer rate (LIBOR) plus the preset risk premium.

8 Left to their own devices, each bank could have waited for the other banks to lend the funds to prevent a formal default; only by bringing the banks together and jointly agreeing to lend the country the funds to continue to service the loans could outright default be avoided, which thus became known as “concerted” or “forced” lending.

9 In the final set of debt workouts for the 1980s crises, the IMF and international development banks lent additional funds to the governments to help them purchase so-called zero coupon U.S. Treasury bonds (these bonds pay the total sum of their interest upon maturity of the bond). As the value of these bonds at maturity would equal the debts falling due, they guaranteed repayment and sweetened the final restructuring deals. There were also “rolling guarantees” of interest payments in a number of the agreements, in essence insuring the “next” payments falling due.

10 From the developing country government's perspective, the interest rate on foreign-issued bonds in hard currency may be a small fraction of that paid on domestic currency bonds, where the interest rate and inflation environments are very different.

11 In fact, the simplest way to accomplish the same thing would be to newly borrow enough funds to cover the payments falling due and repay that new loan later; thus, asking to restructure a bond means the government's reputation has already sagged so much that it has lost “access” to the market and cannot issue new bonds.

12 One contentious issue between governments and private creditor representatives (as expressed in discussions of a prospective “code of good conduct” for countries and their private creditors) has been who should pay for the expenses of a creditor committee. The reader may imagine how the different sides of this dispute aligned themselves.

14 Having defaulted at the end of 2001, Argentina made a take-it-or-leave-it swap offer of new bonds for old valued by the market at about thirty cents on the dollar in early 2005, and its Congress essentially declared that any original bonds remaining after the swap would be null and void; Argentina had claimed its bondholders had all along refused to enter into serious negotiations despite trying to engage them. The bondholders, on their side, said it was hard to negotiate, since the government was asking them to absorb unprecedented losses, which most of them did, as in the end 76 percent of the bondholders agreed to the swap.

15 This is neither to deny that ODA debt is in practice often treated differently in negotiated debt restructuring, nor that several creditor governments long ago converted all their ODA loans into grants; it is rather that the practice is not universal, and considerable bilateral ODA is still given as loans and repayment is insisted upon and renegotiated as part of debt restructurings after recipient governments default.

16 Although the Iraqi and Nigerian cases can be claimed as falling under the Evian Approach, the reality is that political forces and not economics drove the analysis.

17 Following global recognition of the governance issue when heads of state and government included it in the Monterrey Consensus at the United Nations International Conference on Financing for Development in March 2002, it entered the agendas of the ministerial committees that oversee the IMF and World Bank. In April 2006, the IMF committee requested that concrete proposals for reform of the IMF be presented at its next meeting in September 2006, when it endorsed a two-year program of “quota and voice reforms.”

18 The phrase “lender of last resort” is used in a different sense here than in discussions of national central banks providing short-term loans to replace liquidity in the commercial banks in a domestic banking crisis.

19 The IMF insists, nevertheless, that it does not and should not intervene in actual debtor-creditor negotiations on the terms of relief. Private creditors agree with the Fund on this, and one of the reasons that they so forcefully resisted the IMF initiative to create the Sovereign Debt Restructuring Mechanism in 2003 is they feared that the IMF would manipulate the debt negotiations from behind the scenes.

20 The IMF has a large stock of gold, mainly paid in by members in its early years. The gold is valued on the IMF's books at an artificially low price and so any sale at market prices provides very large capital gains. The constraint on selling the gold is that gold-producing countries fear it will reduce the market price of their gold exports. The 1999 sale was thus artfully designed so the gold never hit the market and the sale was almost immediately reversed when the buying governments (Brazil and Mexico) used the gold to make loan payments to the Fund, leaving the IMF with its original physical volume of gold intact, albeit with some of it now carried on its books at the current market price.

21 The exception is the European Bank for Reconstruction and Development, which was created in 1991 to assist in the economic transition of the formerly centrally planned economies of eastern and central Europe and the former Soviet Union. Its primary mission is to nurture private-sector development in those countries.

22 Governments actually had to purchase outright only a fraction of the value of their shares as “paid-in capital, ” the rest being “callable.”

23 The IDA completed its fourteenth replenishment in 2005.

24 In fact, many governments have prepared PRSPs with limited consultation, and in some cases World Bank staff themselves prepared PRSP drafts on an interim basis. While some fault the Bank for not pushing hard enough for civil society involvement (or for not taking challenging civil society views on board when expressed), the PRSP exercise seems a unique foreign intervention into borrowing country politics.

25 The argument has forcefully been made by Kunibert Raffer, this volume, pp. 127–50.

* Views captured on Cambridge Core between September 2016 - 21st January 2021. This data will be updated every 24 hours.

The Players and the Game of Sovereign Debt
×

The Players and the Game of Sovereign Debt
×

The Players and the Game of Sovereign Debt
×
×