Acinetobacter baumannii is a significant nosocomial pathogen often associated with extreme drug resistance (XDR). In Argentina, isolates of A. baumannii resistant to tetracyclines have accounted for more than 40% of drug-resistant isolates in some hospitals. We have previously reported the dispersion of the tet(B) resistance element associated with the ISCR2 transposase in epidemiologically unrelated A. baumannii isolates recovered from 1983 to 2011. This study extends this surveillance to 77 recent (2009–2013) XDR A. baumannii isolates with different levels of minocycline susceptibility. Isolates were examined by a pan-PCR assay, which showed six different amplification patterns, and specific PCRs were used for the confirmation of the the ΔISCR2-tet(B)-tet(R)-ISCR2 element. The tet(B) gene was present in 66 isolates and the ISCR2 element in 68 isolates; the tet(B) gene was associated with ISCR2 in all tet(B)-positive isolates. We conclude that this element is widespread in XDR A. baumannii isolates from Argentina and could be responsible for the emergence of tetracycline resistance in recent years.

Acinetobacter baumannii is widely recognized as a significant extreme drug-resistant (XDR) nosocomial pathogen [1], which has an intrinsic ability to develop resistance to several classes of antibiotics used to treat such infections. Specifically, resistance to carbapenem agents has increased markedly in recent years and in some countries, such as Argentina, accounts for almost 85% of clinical isolates of the species (http://antimicrobianos.com.ar/2013/10/informe-resistencia-2012-argentina/). In Argentina we have witnessed the emergence of minocycline resistance in A. baumannii reaching 40% of isolates in some centres [2] but there are few reports on the level of resistance in other countries with the exception of Iran where 17% of A. baumannii hospital isolates exhibited resistance to this agent [3].

There are few options for the treatment of XDR A. baumannii infections but some studies have shown that combining the tetracycline, tigecycline, with colistin can be efficacious for such cases [4]. Furthermore, recent evidence indicates that minocycline offers an alternative treatment option for minocycline-susceptible, but otherwise multiply resistant A. baumannii strains when used in combination with colistin and/or carbapenems [5], leading to the proposal that intravenous treatment of multiply resistant A. baumannii pneumonia with minocycline offers a viable treatment option for such patients [6].

Given this clinical validation of the use of tetracyclines in these infections it is important to survey the incidence of resistance to these agents in A. baumannii and document and characterize the genetic elements that confer resistance in clinical isolates. Recently, our group has reported the dispersion of tetracycline resistance determinants in 47 epidemiologically unrelated A. baumannii isolates in Argentina and identified the presence of the tet(B) gene in about one-third of these isolates [7]. This was substantiated the finding of Nigro & Hall [8] that tet(B) was associated with the ISCR2 transposase (both, the full and truncated version of the gene) in a representative isolate of the carbapenem-resistant global international clone II, which is suggestive of a possible dispersion of the clone. In this paper we present the results of a molecular surveillance study to map the dispersion of the ΔISCR2-tet(B)-tet(R)-ISCR2 element in recent XDR A. baumannii isolates recovered in recent years in Argentina.

Seventy-seven epidemiologically unrelated XDR A. baumannii isolates recovered from six hospitals in different regions of Argentina during 2009–2013 were studied (Table 1). The isolates were recovered from a variety of clinical sites and samples from individual patients, e.g. blood, urine, and respiratory tract. Isolates were confirmed as A. baumannii by MALDI–TOF MS (Bruker Daltonik, Germany) and rpoB amplification and sequencing. The resistance profiles of the isolates to ampicillin/sulbactam, piperacillin/tazobactam, cefepime, ceftazidime, imipenem, meropenem, ertapenem, gentamicin, amikacin, ciprofloxacin, levofloxacin, minocycline, tetracycline, trimethoprim-sulfamethoxazole, nalidixic acid, nitrofurantoin and colistin were determined by the disk diffusion method according to Clinical Laboratory Standards Institute (CLSI) guidelines or by using the Vitek 2 System (bioMérieux, France) employing the panel AST-082 (GNS susceptibility card), and the minimum inhibitory concentration results were interpreted using the CLSI categories [9].

Table 1. Description of the studied isolates and the corresponding PCR results obtained 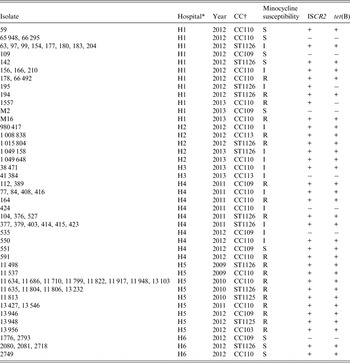 Total DNA was extracted according to the manufacturer's instructions (Wizard Genomic DNA Purification kit; Promega, USA) and subjected to amplification in a pan-polymerase chain reaction (PCR) assay of six genes to define the genetic relatedness of the isolates [10]. Those isolates showing a novel pattern in the pan-PCR assay that differed from known patterns of A. baumannii of the clonal complex (CC) circulating in Argentina, were subjected to multilocus sequence typing (MLST) according to the scheme of Bartual et al. [11] and allele sequences were compared at http://pubmlst.org/abaumannii/. The e-BURSTalgorithm (http://eburst.122mlst.net/) was used to assess the genetic relationship of sequence types (ST).

PCR reactions to amplify tet(B) and ISCR2 genes, and to define the genetic context of tet(B) were performed using previously described specific primers [7]. To identify the presence of the AbaR-type element integrated within comM, which is the most common insertion site for this type of island, or phoS, which has been described as a secondary insertion site, four different PCR reactions (4 F/4R, 2 F/2R, 4R/2 F, phoF/phoR) were performed using previously described primers [12, 13]. These reactions additionally determined the location of ΔISCR2-tet(B)-tet(R)-ISCR2 within the AbaR-type genomic island. PCR amplification products were sequenced on both DNA strands using an ABIPrism 3100 BioAnalyzer and Taq FS Terminator Chemistry (PerkinElmer, USA) and analysed with Sequencher 4·7 software (Gene Codes Corp., USA) and BLAST v. 2·0 software (http://www.ncbi.nlm.nih.gov/BLAST/).

Six different amplification patterns were revealed by the pan-PCR. The amplification pattern corresponding to CC113B, previously the most prevalent CC in our region, was observed in only two isolates (1 008 838 and 41 384). However, 33 (42%) isolates gave a pattern corresponding to CC110B indicating the emergence of this CC and a displacement of CC113B in the region. Nine isolates were assigned to CC109B (international clone 1), Furthermore, two novel pan-PCR patterns were identified which did not correspond to any of the patterns previously described in our region [13]. One of the new patterns, first designated as P133, was found in 30 isolates (38%) indicating its wide distribution in the hospital setting. The other novel pattern, designated PM1, was present in only two isolates (11 813and 13 948), and is identical to the pattern described from the USA for the strain Ab04 (E. Snitkin, personal communication). A single isolate (13 956) gave a pattern consistent with the control strain of CC103B.

The tet(B) gene was present in 66 (86%) of the 77 A. baumannii isolates tested and ISCR2 was found in 68 isolates; all tet(B)-positive isolates harboured the complete ISCR2 element (Table 1). We have previously described the presence of a truncated ISCR2 (ΔISCR2) downstream of the tet(B) gene [8]. In this study PCR amplification with specific primers (ISCR2B/tetBF) for ΔISCR2 confirmed that all tet(B)-tet(R)-ISCR2-positive isolates (n = 66), where ISCR2 is upstream of the tet(B) gene, contain ΔISCR2 downstream of tet(B), supporting the wide dispersion of ΔISCR2-tet(B)-tet(R)-ISCR2 in our A. baumannii population (Fig. 1). BLAST analysis against GenBank database sequences, also revealed this element in four other A. baumannii isolates, one of them being Ab 13 205 previously identified by our group [7]; the other three isolates (ZW85–1, BJAB0715, A91) shared 99% identity with the ΔISCR2-tet(B)-tet(R)-ISCR2 sequence (GenBank accession no. JX566450; Fig. 1). In one of the latter isolates the element was located in a plasmid, ZW85p2, and in the other two strains the element was chromosomally located within the AbaR-type genomic island [8]. As our earlier work did not find tet(B) within the AbaR-type genomic organization [7], we sought to verify the location of tet(B) using specific PCR reactions (4 F/4R, 2 F/2R, 4R/2 F, phoF/phoR) for the intact comM and phoS genes [13, 14] and confirmed that this gene was intact in all the studied isolates.

Fig. 1. Schematic representation of tet(B)::ISCR2 genetic element. Boxes and lines of different thickness and colour represent determinant and antibiotic resistance elements. Vertical bars indicate the inverted repeats of the ISCR2 element. ΔISCR2 is a partial version of the ISCR2 element. Genes are shown by horizontal arrows; phosphoglucosamine mutase (glmM) and the transcription regulator of ArsR family genes are represented as g and r, respectively. Primers are indicated by horizontal black arrows. The tet(B)-ISCR2 element is available from GenBank under accession number ANJX566450.

This study presents data supporting an increase in the dispersion of the ΔISCR2-tet(B)-tet(R)-ISCR2 resistance element in XDR A. baumannii isolates recently recovered in Argentina, compared to our earlier survey [7]. This increase (86% vs. 28%) explains in part the observed rise in minocycline resistance in recent years. Minocycline, together with colistin, has been reported to be the only antimicrobials to which at least 50% of clinical A. baumannii isolates are susceptible and are therefore drugs of last resort for the treatment of such infections [5]. Moreover, a recent review of extensive data supports the successful use of minocycline for MDR strains [6]. An increase in minocycline resistance should therefore act as a stimulus in consideration of new combinations of agents such as tigecycline with colistin, or doxycycline with amikacin as alternative therapies, particularly for severe infections caused by XDR strains of the species.

In conclusion, our data taken in combination with our earlier study [7] add weight to the conclusion that within the resistance element ΔISCR2-tet(B)-tet(R)-ISCR2, the linkage of the tet(B) gene with the insertion sequence ISCR2, provides a genetic mechanism for resistance that has spread in A. baumannii isolates in Argentina. In addition, we have documented the emergence of a new lineage (ST1126) and the possible displacement of the clonal complex CC113 by CC110, which is indicative of a genetically dynamic A. baumannii population. Last, we report the first identification of isolates belonging to international clone II in Argentina which had hitherto only been documented in South America in Curitiba, Brazil [15]. These data highlight the importance of performing molecular genetic surveillance studies to identify and monitor rate changes in the antimicrobial resistance determinants in A. baumannii populations.