This study determined the genetic background of virulence and resistance genes of MRSA ST398 in Austria. From 2004 up to 2008 a total of 41 human isolates of MRSA ST398 were investigated for virulence and resistance gene patterns using DNA microarray chip analysis. Highly similar virulence gene profiles were found in 29 (70·7%) of the isolates but genes encoding Panton–Valentine leukocidin, enterotoxins, or toxic shock syndrome toxin were not detected. Genes conferring resistance to tetracycline and erythromycin-lincosamide were common as all but one of the isolates exhibited tetM and/or tetK, which are involved in tetracycline resistance, and 12 (29·9%) were positive for ermC, conferring resistance to erythromycin/lincosamide. SplitsTree analysis showed that 40 isolates were closely related. Changes in virulence and resistance gene patterns were minimal over the observed time period.

The online version of this article is published within an Open Access environment subject to the conditions of the Creative Commons Attribution-NonCommercial-ShareAlike licence <http://creativecommons.org/licenses/by-nc-sa/2.5/>. The written permission of Cambridge University Press must be obtained for commercial re-use.
Copyright
Copyright © Cambridge University Press 2012

In recent years the emergence of methicillin-resistant Staphylococcus aureus (MRSA) sequence type 398 (ST398), known as live-stock-associated MRSA (LA-MRSA) has attracted particular attention. This is due to its association with pigs and pig farming and its ability to colonize or infect people, such as farmers, who work in close contact with these animals [Reference Graveland1, Reference Grisold2]. Less frequently MRSA ST398 has been found in a variety of other farm animals, such as horses, poultry, or cattle and from foods of animal origin. Although inter-human transmission has been described, the incidence of MRSA ST398, especially in hospitals, appears to be much lower than for other MRSA genotypes [Reference Graveland1].

Phenotypically, MRSA ST398 is resistant to oxacillin and all β-lactam antibiotics. Resistance to tetracycline is also very common due to its frequent use in pig and cattle farming [Reference Springer5]. Resistance to other antibiotics, especially erythromycin, clindamycin, aminoglycosides or trimethoprim/sulfamethoxazole has been reported; however, multi-resistance to ⩾3 antimicrobial groups is uncommon [Reference Graveland1, Reference Argudin3].

In Austria intensive pig farming with about 1·2 million pigs is concentrated in two regions (north and south-east) which are served by two microbiological laboratories and these account for practically all human MRSA ST398 isolates reported in Austria [Reference Grisold2, Reference Krziwanek, Metz-Gercek and Mittermayer6].

The aim of this study was to determine whether the virulence and antimicrobial resistance gene profiles of MRSA ST398 in human isolates in Austria differ between the two regions or whether animal trading throughout the country resulted in the spread of identical MRSA ST398 clones.

From January 2004 to December 2008, 41 MRSA ST398 isolates were identified from a total of about 1900 MRSA human primary isolates, from routine samples at two microbiological laboratories in Austria (27 from Linz, 14 from Graz). As published previously, contact with animals (predominantly pigs and/or cows, and horses or hens only) was documented in 32 patients. Clinical manifestations ranged from solely colonization to purulent infections including a case of complicated osteomyelitis. The number of MRSA ST398 detected per year increased steadily from one isolate in 2004 to 16 in 2008 [Reference Grisold2, Reference Krziwanek, Metz-Gercek and Mittermayer6].

None of the isolates exhibited resistance to trimethoprim/sulfamethoxazole, quinupristin/dalfopristin, fusidic acid, daptomycin, rifampicin, linezolid, and vancomycin.

All 41 isolates were negative for genes encoding PVL (lukS-PVL, lukF-PVL), enterotoxins (ent genes), and the toxic shock syndrome toxin (tst-1). By contrast all isolates were positive for genes encoding leukocidins (lukF and lukS as part of the hlg locus), haemolysins (hl, hld, hlIII), aureolysin (aur), glutamyl endopeptidase/V8-protease (sspA) and staphopain A (sspP). The frequency of other genes was as follows: leukocidin genes lukX in 40 and lukY in 36 (87·8%) isolates, the haemolysin genes hlgA in 39 (95·1%), and hla in 32 (78·0%) isolates, and the staphopain B gene sspB in 39 (95·1%) isolates. The sak gene encoding staphylokinase in combination with scn encoding a staphylococcal complement inhibitor was detected in four (9·8%) isolates, chp (CHIPS) gene coding for chemotaxis inhibitory protein in three (7·3%) and the arcD-SCC gene coding for arginine/ornithine antiporter in only a single (2·4%) isolate. Twenty-nine (70·7%) isolates demonstrated highly similar virulence gene profiles including the leukocidin genes (lukF, lukS, lukX, lukY), haemolysin genes (hlgA, hl, hla, hld, hlIII), aureolysin gene (aur), glutamyl endopeptidase/V8-protease gene (sspA), staphopain B gene (sspB), and staphopain A gene (sspP). Other gene profiles were represented by one or two isolates.

SplitsTree analysis was used for calculation of an unrooted phylogenetic network depicting strain relatedness, using the data on presence/absence of genes generated by DNA microarray. Except for one strain of spa type t034, all isolates showed highly similar gene patterns suggesting they were closely related (see Fig. 1). Besides several minor clusters, one major cluster comprised eight of the 14 MRSA ST398 isolates from the south-east and two from the north of Austria. Four isolates exhibited identical gene profiles indicative of the same strain (Fig. 1). The analysis did not result in a clear separation of isolates from the two geographical regions but some time-dependent genetic changes were evident as 9/10 isolates recovered from 2004 to 2006 clustered very closely together, while those from 2007 and 2008 showed greater genetic variations, depicted in increased distance in SplitsTree. 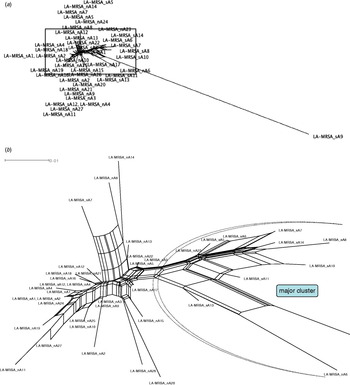 Fig. 1. [colour online]. SplitsTree visualizing the similarity among gene profiles obtained by DNA microarray analysis of 41 human isolates of MRSA ST398 in Austria (2004–2008). (a) Overview over the full SplitsTree depicting all 41 isolates. (b) Detail zooming in on the region depicting the 40 highly similar MRSA ST398 isolates, while omitting atypical isolate LA-MRSA_sA9. Among minor clusters, one major cluster containing almost exclusively strains isolated from the south of Austria was found.

In accordance with previous studies, resistance to tetracycline was almost universal among the isolates and related to the presence of the tetM gene [Reference Argudin3], although two-thirds of the isolates also carried the tetK gene. The finding of more than one tet gene might be explained by the high antibiotic pressure exerted by the widespread use of tetracycline in animal farming [Reference Springer5]. The absence of ermA or ermB encoding MLSB resistance in the isolates is in contrast to the predominance of ermA in oxacillin-susceptible S. aureus. It has been also suggested that ermB is more common in staphylococci from animal sources compared to human sources, but this could not be confirmed by our study [Reference Gherardi10]. The finding of a single chloramphenicol-resistant isolate in this series corroborates the reported rarity of the fexA gene in MRSA ST398 [Reference Argudin3].

Multi-resistance was found in 31·7% of isolates and this rate may be considered low compared to reports from other countries [Reference Argudin3, Reference Huber11]. However, the absence of resistance to ciprofloxacin or trimethoprim/sulfamethoxazole among the isolates contrasts with the reported resistance rates from Germany of 8% for ciprofloxacin and 4% for trimethoprim/sulfamethoxazole [Reference Graveland1, Reference Argudin3]. Overall, resistance gene patterns were more homogeneous in isolates from south-eastern Austria than those from northern Austria, as some resistance genes (vga, aacA-aphA, fexA) were only detected in strains from northern Austria.

As described previously, the tested MRSA ST398 isolates lacked genes encoding several clinically important S. aureus-associated virulence factors such as PVL, toxic shock syndrome toxin, exfoliative toxins, or enterotoxins [Reference Argudin3, Reference Monecke8]. This is consistent with the fact that clinical diseases in humans due to this genotype are rarely observed [Reference Graveland1]. While all isolates were positive for lukS and lukF, no other leukocidin genes, such as lukM, lukD, and lukE were present. Nevertheless, the first isolates of MRSA ST398 harbouring the PVL gene have been described recently in the literature [Reference Yao12] and there is therefore a need for continuous surveillance as acquisition of this virulence trait could have a significant impact on the disease potential of the genotype.

Notably the two MRSA ST398 isolates of spa type t034 differed particularly from others in the series as one of these exhibited the highest number of virulence genes and was susceptible to tetracycline, which is rather uncommon in MRSA [Reference Argudin3]. By contrast, the second t034 isolate had fewer virulence genes than all other isolates and also lacked lukX and lukY. While the lack of lukX in S. aureus, including MRSA, has been described before [Reference Huber11], the absence of lukY has not, to our knowledge, been reported. The second isolate was also the only representative from south-eastern Austria to demonstrate resistance to tetracycline and erythromycin-clindamycin. The Splits Tree analysis showed that this strain clustered separately from the rest and epidemiological investigation of animal contact and clinical background of the patient did not provide an explanation for the orign of this strain.

There are two main limitations of this study. First, comparison of MRSA ST398 obtained from human and animal sources within the same time frame was not possible, as screening of animals in Austria did not begin before 2008 [Reference Springer5]; second, the number of included human samples is limited, due to the rarity of this genotype in humans in Austria [Reference Grisold2, Reference Krziwanek, Metz-Gercek and Mittermayer6].

To summarize, virulence and resistance gene profiles in Austrian MRSA ST398 appear at the moment to be largely uniform, with only few variations beginning in 2007. Our results support the hypothesis that the MRSA ST398 isolates in Austria may have originated from a single clone that was spread throughout the country by animal trading [Reference van Loo13]. Up to now the input of new MRSA ST398 clones appears to be a rare event. The data obtained facilitate worldwide comparison of the virulence gene and antimicrobial resistance properties of this genotype; due to the already described occurrence of the PVL gene in MRSA ST398 continuous surveillance is needed to monitor a possible shift to a more virulent or more resistant form.