The Vibrio cholerae O1 (VCO1) El Tor biotype appeared during the seventh cholera pandemic starting in 1961, and new variants of this biotype have been identified since the early 1990s. This pandemic has affected Vietnam, and a large outbreak was reported in southern Vietnam in 2010. Pulsed-field gel electrophoresis (PFGE) and multilocus variable-number tandem-repeat analyses (MLVA) were used to screen 34 VCO1 isolates from the southern Vietnam 2010 outbreak (23 patients, five contact persons, and six environmental isolates) to determine if it was genetically distinct from 18 isolates from outbreaks in southern Vietnam from 1999 to 2004, and two isolates from northern Vietnam (2008). Twenty-seven MLVA types and seven PFGE patterns were identified. Both analyses showed that the 2008 and 2010 isolates were distinctly clustered and separated from the 1999–2004 isolates.

Cholera is an acute intestinal infection caused by ingestion of food or water contaminated with Vibrio cholerae O1 [1]. Since 1817, seven cholera pandemics have been reported. The seventh pandemic that began in 1961 was caused by the Vibrio cholerae O1 (VCO1) El Tor biotype. However, new variants of VCO1 El Tor have been discovered since the early 1990s. They express a more virulent form of the classical cholera toxin and are associated with higher case-fatality ratios [Reference Okada2, Reference Safa, Nair and Kong3]. Many studies have suggested that these El Tor variants have replaced the prototypic El Tor strains in Asian and African countries such as Bangladesh and India [Reference Raychoudhuri4, Reference Morita5]. Modern control and prevention methods can be effective against cholera in developed countries, but the lack of clean water sources and appropriate sanitation in developing countries makes control difficult. Global travel also contributes to the spread of cholera, causing it to remain a major public health concern.

In 2010, cases from 14 Asian countries accounted for 4·3% of the reported global incidence of cholera, an increase of 50% compared to 2009 [6]. The Greater Mekong area was a hotspot, with 3405 cases found in Thailand, Cambodia, Laos, and Vietnam. Of these, 606 cases were reported in Vietnam. From 2005 to 2009, cholera appeared only in northern Vietnam where a large outbreak occurred during 2007–2008 [7]. One patient moved from northern Vietnam in 2008 and caused one sporadic case in southern Vietnam (L.T.P.N., unpublished information). However, at the beginning of 2010, cholera became established in the An Giang province of southern Vietnam, from which it spread and lasted until the end of the year. During this period, there were only sporadic cases in northern Vietnam.

Several molecular methods are used in the identification and spread of epidemiologically linked bacterial strains, of which, pulsed-field gel electrophoresis (PFGE) analysis and multilocus variable-number tandem-repeat analysis (MLVA) are common due to their high discriminatory power. We performed these techniques to investigate the relationship between the VCO1 isolates from southern Vietnam in 2010 compared to isolates from previous years.

Table 1. Distribution of number of available and analysed isolates from 2010 cholera epidemic in this study 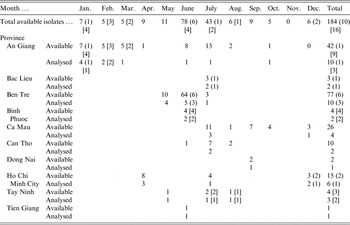 Numbers in parentheses indicate those of environmental isolates.

Numbers in square brackets indicate those from imported cases.

The MLVA of the cholera isolates was performed using seven previously described loci [Reference Danin-Poleg9]. Five of the loci (1, 2, 3, 5, and 6 corresponding to VC0147, VC0436-7, VC0500, VC1457, and VC1650, respectively) were on the large chromosome, and two (7 and 8 corresponding to VCA0171 and VCA0283, respectively) were on the small chromosome. The details for the loci and the PCR primers used to amplify them have been published previously [6]. Total DNA was extracted from fresh colonies by boiling the sample for 10 min, and polymerase chain reaction (PCR) was performed as follows: initial denaturation at 95 °C for 15 min; 35 cycles of 95 °C for 20 s, 60 °C for 90 s, and 72 °C for 60 s; with a final extension at 72 °C for 10 min. The PCR products were separated utilizing an ABI 3130 Genetic Analyzer (Applied Biosystems, USA), and the sizes were determined with GeneMapper software v. 4.1 (Applied Biosystems, USA) and converted to the repeat copy number; the null allele was designated −2 [Reference Hyytiä-Trees10]. The repeat copy numbers were analysed using a categorical multi-state coefficient and UPGMA clustering with BioNumerics software to create a minimum spanning tree of MLVA. 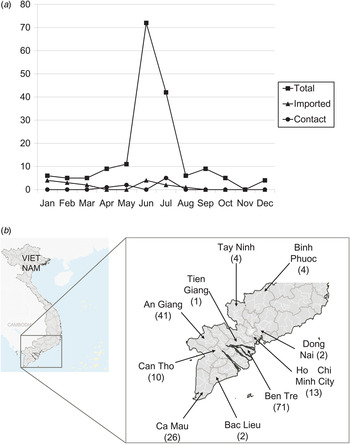 Fig. 1. Overview of the cholera epidemic in southern Vietnam 2010. (a) Epidemic curve of culture-positive cases. –■–, Total number of cases; –▴–, imported cases; –•–, contact persons. (b) Distribution of cases. Numbers in parentheses represent the number of cases.

Fig. 2. Cluster analysis of the seven representative PFGE patterns (P1–P7). The names of the patterns, the number of isolates, and years of isolation related to the patterns are shown on the right.

Table 2. Summary of the results of molecular typing in this study 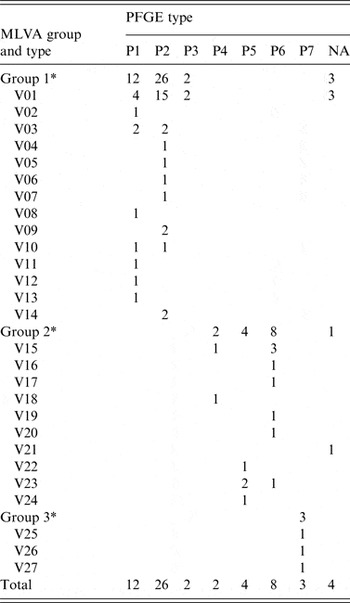 * Subtotal numbers for each group are indicated. 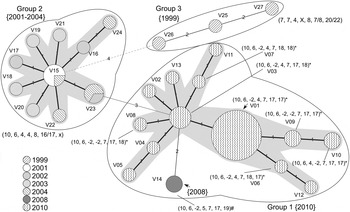 Fig. 3. Minimum spanning tree of the results from the multilocus variable-number tandem-repeat analysis (MLVA). The names of MLVA types (V01–V27) are shown. Circle sizes correlate to the number of isolates for each type. The numbers on the branches indicate the number of variable loci. Thickness and length of the branch reflect the number of variable loci. Single locus variants are partitioned in grey. Patterns in the circle indicate the year of isolation. The patterns of two circles in group 2 are divided as mixed with different year isolates. Groups 1–3 are enclosed by lines. Common profiles of groups 2 and 3 are indicated in parentheses in order of VC-1, 2, 3, 5, 6, 7, and 8 loci. X/x indicates variation of more than 2; X = −2, 3, 4; x = 13, 14, 23, 24, 26–29. Profiles of group 1 show those sharing common profiles in previous studies (* studies in ref. [Reference Okada2]; # studies in ref. [Reference Choi16]).

In 2010, there was a cholera outbreak in southern Vietnam which involved 174 patients. We conducted two kinds of molecular epidemiological analyses, PFGE analysis and MLVA to uncover the genetic relationships between the isolates and also with previous endemic strains. PFGE analysis identified three patterns (P1–P3) in the isolates from 2010 (Fig. 2). According to epidemiological data, the initial domestic cases of the 2010 cholera outbreak were identified in An Giang province, which borders Cambodia (Table 1) where pattern P1 was identified. Pattern P2 accounted for the majority in this study (Table 2). These include the isolates from domestic outbreaks in nine provinces in southern Vietnam, the two isolates from imported cases, and two isolates from environmental water samples. The two additional isolates originating from northern Vietnam in 2008 also had the P2 pattern (Fig. 2). Patterns P1–P3 were quite similar to each other, but differentiated from the P4–P6 isolates of 2001–2004 or P7 isolates of 1999 according to a clustering analysis (Fig. 2), suggesting isolates in 2008–2010 were a different clone from those previously. Further, the PFGE patterns could also be regarded as similar to what had been described previously for isolates from many other countries, including Thailand and Laos in 2007 [Reference Ngo11, Reference Ang12], northern Vietnam in 2007–2008 [Reference Okada13], and Malaysia in 2009 [Reference Sithivong14].

MLVA could differentiate isolates better than PFGE analysis, and identified 27 types in total. Thirteen types (V01–13) were identified in the isolates from 2010 (Table 2, Fig. 3). The MLVA profiles suggested that the 2010 isolates had a close genetic relationship to each other. One MLVA type (V01; VC-1, 2, 3, 5, 6, 7, and 8 of 10, 6, −2, 4, 7, 17, and 17, respectively) was dominant throughout the year and was observed for 24 of the 41 isolates from 2010, including four isolates from imported cases. MLVA is known to have high discriminatory power and is useful for tracing the source and/or transmission of infection in an outbreak [Reference Ali15]. It is likely that the other 12 variants were created during dissemination that year, although more extensive study with epidemiological data would be needed to confirm this.

The two isolates from 2008 displayed V14 in MLVA. V14 was a double locus variant for V01 as well as V03 (Fig. 3). Isolates from 1999 and 2001–2004 also displayed multiple types but were clustered in different groups (groups 3 and 2, respectively) than those from 2008–2010 (group 1) with ⩾3 loci difference from group 1 isolates (Fig. 3). There seemed to be correlations between the results of PFGE and MLVA analyses (Table 2). The group 1, 2, and 3 isolates showed PFGE patterns P1–P3, P4–P6, and P7, respectively, which consisted of different PFGE sub-clusters (Fig. 2). The MLVA results could therefore strengthen the results of PFGE analysis and suggest that isolates in group 1 could be derived from a unique clone.

In this study, PFGE analysis and MLVA identified seven patterns and 27 types, respectively. Both techniques indicated that the strains in 2008 and 2010 differed from those in 1999–2004, and that they shared common features with strains of other Southeast Asian countries in recent years. This implies that the outbreak in southern Vietnam in 2010 is likely to be part of large epidemic which at least covered the 2008–2010 outbreaks in this region. MLVA revealed a variety of variants which could be created during the spread of cholera. The countries in the Greater Mekong area are linked to each other geographically and economically. Extensive molecular epidemiological analyses would be expected to reveal additional clusters of cholera isolates in these areas, and also identify linkages between clusters. Such linkages can be useful for tracing common sources of contamination which leads to reducing the transmission of cholera. It would be significant for the control of epidemic of cholera to identify genetically related clusters with molecular epidemiological analyses, and to combine the results with epidemiological information in a timely manner.