Although Malta is historically linked with the zoonosis brucellosis, there had not been a case of the disease in either the human or livestock population for several years. However, in July 2013 a case of human brucellosis was identified on the island. To determine whether this recent case originated in Malta, four isolates from this case were subjected to molecular analysis. Molecular profiles generated using multilocus sequence analysis and multilocus variable number tandem repeat for the recent human case isolates and 11 Brucella melitensis strains of known Maltese origin were compared with others held on in-house and global databases. While the 11 isolates of Maltese origin formed a distinct cluster, the recent human isolation was not associated with these strains but instead clustered with isolates originating from the Horn of Africa. These data was congruent with epidemiological trace-back showed that the individual had travelled to Malta from Eritrea. This work highlights the potential of using molecular typing data to aid in epidemiological trace-back of Brucella isolations and assist in monitoring of the effectiveness of brucellosis control schemes.

Brucellosis is a zoonosis of global socioeconomic importance that affects a variety of mammalian species and is caused by bacteria from the genus Brucella. Although a number of Brucella species are known to cause disease in humans, B. melitensis is the most prolific [Reference Godfroid1].

In animals the disease manifests as a number of reproductive problems including abortions and sterility while in humans, symptoms are non-specific and can include fever, malaise, headache, fatigue and in chronic cases, arthritis [Reference Godfroid1]. Animal–human transmission is through either direct contact with infected aborted material or through the consumption of unpasteurized dairy products [Reference Godfroid1]. The incubation period in humans is variable and may be as long as 60 days.

In October 2013, four isolates of B. melitensis from the same patient in Malta were received at the WHO Collaborating Centre for Reference & Research on Brucellosis within the Animal and Plant Health Agency (APHA), UK with a request for genotypic characterization to determine a possible geographical origin of the causative agent. No patient information was provided at the time of sample submission.

Malta is in the process of collating data to attain brucellosis-free status [Reference Gauci2], and there was a concern that this recent infection might indicate that the disease was still present on the island. The last confirmed human case of brucellosis in Malta was a single case in a veterinarian in 1998 and there have been no cases of brucellosis in Maltese livestock since 2008. Malta undertakes an extensive programme of surveillance of both cattle and sheep, and goats. In addition all cattle imported from outside Malta have to be certified as brucellosis free prior to entry while there has been no importation of sheep and goats into the country for several years.

Although there is a global database of multilocus variable number tandem repeat (VNTR) analysis 16-loci (MLVA-16) [Reference Al Dahouk3] profiles available online, this extensive resource has little data available concerning isolates of Maltese origin. To overcome this issue, 11 B. melitensis strains of Maltese origin from the APHA culture collection that had been isolated in a 10-year period between 1950 and 1960 were added to recent human isolates for characterization based on MLVA-16 and multilocus sequence analysis (MLSA) [Reference Whatmore, Perrett and MacMillan4]. Unfortunately, more recent strains were not available but these strains, originating from both humans and livestock from an era of less extensive animal and human movements, represent the likely endemic genotypes previously circulating in Malta.

DNA was prepared from the patient isolates and the freeze-dried historical isolates in the same way. Isolates were initially grown on serum dextrose agar (SDA) plates with a single colony being selected from each isolate to be re-cultured on SDA for subsequent DNA extraction using a phenol-chloroform method [Reference Whatmore5]. Both MLSA and MLVA-16 were performed as previously described [Reference Al Dahouk3, Reference Whatmore, Perrett and MacMillan4]. MLSA profiles were compared with over 600 Brucella profiles held on an internal APHA MLSA database. The strains within this database are both geographically and temporally diverse. The MLVA-16 profiles generated from the recent human isolation and historical Maltese strains were compared with profiles held on both an APHA internal database and on the MLVA-Net global database (http://mlva.u-psud.fr/brucella/). A dendrogram using a previously published weighted scheme [Reference Al Dahouk3] was constructed using Bionumerics v. 6.6 (Applied Maths, Belgium) using the categorical coefficient and unweighted pair-group method with arithmetic mean functions.

MLSA showed that with the recent human case and the historical Maltese isolates represented distinct sequence types (STs). All 11 historic Maltese B. melitensis strains represent ST7 previously reported in a number of isolates including B. melitensis B115 which is of Maltese origin [Reference Le Flèche6]. The geographical range of isolates having this sequence type is relatively large and extends from Portugal to Sudan (A. M. Whatmore, unpublished data). By contrast, the recent human isolates were all found to be a different sequence type, ST12, which was clearly distinct from ST7 associated with the 11 historical Maltese isolates. To date, ST12 has been associated almost exclusively with isolates obtained from the Horn of Africa, namely Somalia and Ethiopia, although this ST has also been found in a single animal isolate from Tanzania (A. M. Whatmore, unpublished data).

The geographical placement of the recent human case by MLSA was backed up with observations of the MLVA-16 data. All 11 isolates of Maltese origin formed a distinct group MLVA-16 cluster compared with B. melitensis profiles from different parts of the globe. However, the MLVA-16 profile from the recent human case was not associated with this cluster but instead grouped with a number of isolates again associated with the Horn of Africa (Fig. 1). Within the cluster of 18 isolates that shared similar profiles to the four strains from the human case, 10/18 had some direct link with nations in the Horn of Africa. Of the other eight isolates one came from Kenya, which borders the Horn of Africa, and three were from the Middle East (United Arab Emirates and Egypt). Although these last two countries do not border the Horn of Africa, there is significant animal movement from Ethiopia and Somalia to both Arab nations and neighbouring states that may account for the distribution of this genotype [7]. 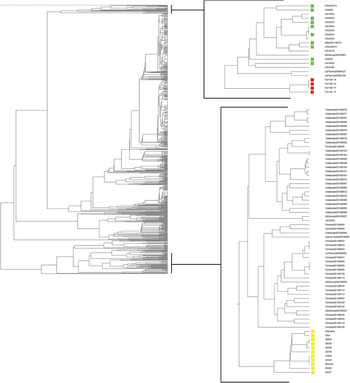 Fig. 1. Dendrogram illustrating MLVA-16 profiles of over 700 Brucella melitensis isolates from different parts of the world [Reference Le Flèche6, Reference Aftab8–Reference Valdezate10]. The green labels represent profiles from strains known to originate in the Horn of Africa. The yellow labels are profiles from the 11 known Maltese strains. The red labels are from the four isolates taken from the recent human case.

Field epidemiology was found to be in agreement with the molecular evidence, suggesting the infection was acquired outside Malta. The infected individual had arrived in Malta in July 2013 from Eritrea seeking asylum and had spent 22 days in migrant detention before being admitted to hospital. Symptomatology history suggests that he had been suffering from night sweats and fever. Consequent to symptoms worsening he was admitted for inpatient investigation and treatment with a 6-week course of doxycycline and rifampicin resolved the infection.

In this study, both MLSA and VNTR have been used as tools to support classical epidemiological observations in a case of disease importation. The use of molecular tools to identify ‘non-endemic’ strains in either an endemic region, or indeed in a setting like Malta, where the disease is considered eradicated, potentially has major implications in terms of control strategy in the event of outbreaks. In this instance, the findings gave confidence to the authorities in Malta that brucellosis surveillance and control measures have been, and still are, effective in maintaining disease freedom.

The authors acknowledge Emma-Jane Dale and Claire Dawson at APHA for the preparation of Brucella DNA extracts for use in this study. This work was funded by the Department for the Environment, Food and Rural Affairs (Defra), Great Britain (RD4100 and SE0314).

* Views captured on Cambridge Core between September 2016 - 16th January 2021. This data will be updated every 24 hours.