In individuals with latent tuberculosis (TB) infection, those living with human immunodeficiency virus (HIV) had a 20–37 times higher risk of developing active TB compared to those without HIV infection. Systematic testing and treatment of latent TB infection are priorities in HIV-infected persons. In China, the prevalence of HIV infection in men who have sex with men (MSM) has gradually increased in the past decade. However, the prevalence of TB infection has been studied sparsely in HIV-infected MSM. Hence, we conducted a pilot study in MSM living with HIV infection in Xi'an city to evaluate TB infection status by means of interferon-γ release assay (IGRA). A total of 182 HIV-infected MSM were included in this study, the prevalence of IGRA positivity was observed to be 8·79% (16/182). IGRA quantitative results were not statistically influenced by the CD4 cell counts of the study participants. However, IGRA positivity was found to be lower than our previously reported data from the general population. This suggests that immunological deficiency might decrease the sensitivity of IGRA and thus increase the number of false negatives. Our primary results, suggesting systematic testing and treatment of latent TB infection together with active case-finding, were equally important for TB control in persons living with HIV infection.

In individuals with latent tuberculosis (TB) infection, those living with human immunodeficiency virus (HIV) had a 20–37 times higher risk of developing active TB compared to those without HIV infection [1]. The annual risk of developing active TB was 5–10% in HIV-infected individuals with latent TB infection [Reference Raviglione2]. Thus, systematic testing and treatment of latent TB infection are suggested to be an essential component of TB control strategy for people living with HIV [3]. In recent years, sexual transmission has become the leading route of HIV transmission in China [Reference Lu4]. Specifically, the number of male-to-male sexual contact-associated HIV/AIDS cases has rapidly increased and accounted for 21·4% of the reported total in 2014 [5]. The HIV infection rate in men who have sex with men (MSM) had gradually increased from 2·5% in 2009 to 11·6% in 2014 [Reference Gao6, Reference Li7], which raised the significance of latent TB infection management in HIV-infected MSM in China. Using interferon-γ release assay (IGRA) to screen for TB infection in various populations, including HIV-infected persons, has been performed in many countries [Reference Agarwal8, Reference Cheallaigh9]. One study conducted in 86 HIV-infected subjects (92% males) found the prevalence of latent TB infection was 7·0% when estimated by QuantiFERON-TB Gold In-Tube (QFT; Qiagen, Germany) [Reference Lin10]. To the best of our knowledge, no study has ever been specifically addressed in HIV-infected MSM in China. Therefore we conducted a pilot study in MSM living with HIV in Xi'an city, to investigate the prevalence of TB infection by IGRA and to provide primary data for further strategic study on TB control in this high-risk population.

We recruited the study participants from Xi'an city between April and July 2014 from a local non-governmental organization (Xi'an Tong Kang Volunteers Workstation). Multiple methods were used for recruitment including website advertisement, distribution of flyers with study-related information at venues frequented by MSM (e.g. MSM clubs, bars, parks, bathhouses) and eligible study participants were also encouraged to refer their peers to attend the study. Those eligible to participate were males, ever had sex with other males, registered HIV-infected persons (confirmed by Western blot test), willing to take tests including IGRA. All study subjects agreed to participate in the study and provided written informed consent.

First, we administered an in-depth questionnaire to each eligible participant via person-to-person interview by trained interviewers. Self-reported sociodemographic characteristics (e.g. age, education, marriage status), antiretroviral therapy (ART) initiation status, history of close contact with TB patient, and history of TB were collected. We performed chest digital radiography (DR) for each participant to exclude those with current TB or with clinically suspected TB (DR abnormalities compatible with TB). Next, blood samples were collected for laboratory detection. We used QFT to test for TB infection, testing was performed according to the manufacturer's recommendations with a cut-off value of 0·35 IU/ml. BD FACS Count™ system (BD Biosciences, USA) was used to quantify CD4+ T cell counts according to the manufacturer's instructions. Finally, questionnaires and testing results were double-entered and cleaned using EpiData software (EpiData v. 3.1 for Windows, The EpiData Association, Denmark). The data were analysed using SAS v. 9.2 software (SAS Institute Inc., USA). Fisher's exact test was used to estimate the relationship between potential risk factors and QFT positivity. The difference of QFT quantitative values by the level of CD4 cells was assessed by Student's t test. Moreover, a P value <0·05 was considered to be statistically significant.

In total, 195 eligible participants were included in this study, two of whom were identified as suspected TB cases and 11 reporting a history of active TB. These 13 subjects were not included in the analysis on the prevalence of TB infection. Demographic and clinical characteristics of the 182 included participants are summarized in Table 1. The ages ranged from 18 to 60 years with an average of 34 years, two thirds of the participants were non-smokers with >12 years education. Of the study participants, 48·35% (88/182) were married to women, 95·05% (173/182) had no history of close contact with a TB patient, and 85·71% (156/182) had started ART. The median CD4 cell counts were 390 cells/μl (interquartile range 263–517). The prevalence of TB infection defined by QFT positivity was 8·79% (16/182) with 95% confidence intervals (CIs) ranging from 5·11% to 13·88%. QFT positivity did not vary significantly according to the major characteristics of the study participants except for age. Figure 1 shows that QFT quantitative results were not statistically influenced by the level of CD4 cells even when stratified by QFT category results. 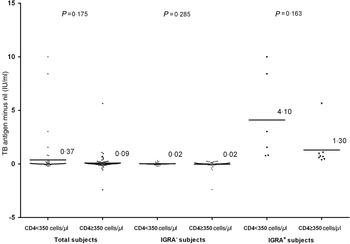 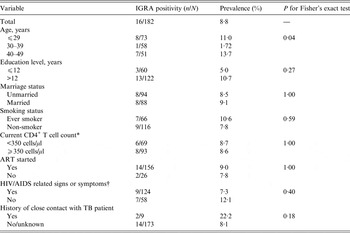 † Signs and symptoms caused by HIV infection or AIDS such as fever, swollen lymph nodes, inflammation of the throat, rash, muscle pain, malaise, and mouth and oesophageal sores.

Although a number of studies have addressed the prevalence of TB infection in HIV-infected persons worldwide [Reference Talati11, Reference Doyle12], the findings were highly inconsistent due to different sample sizes, study populations, CD4 levels, local TB epidemics and ART initiation status. As observed in the present study, the rate of marriage to woman in MSM in China is markedly higher than in Western countries [Reference Zhang and Chu13, Reference Masci and Sciupac14]. It has been reported that 70–80% of well-educated homosexuals or bisexuals in China have or will get married to a woman, due to the fear of stigma, discrimination or parental pressure [Reference Zhang and Chu13]. Although our study did not find a significant relationship between marriage status and QFT positivity, it will be beneficial to further investigate the potential impact of marriage status of MSM on TB infection control in future studies with a larger sample size. In addition, the prevalence of TB infection in our population was lower than in the general male populations (around 14% in the 30–39 years age group) as reported in our recent study [Reference Gao15]. A meta-analysis including 38 studies assessed the sensitivity and specificity of IGRAs for the diagnosis of active TB and found the pooled sensitivity was 65% [95% confidence interval (CI) 55–74, I 2 = 9·8%] and 79% (95% CI 75–83%, I 2 = 24·9%) in HIV-infected and HIV-uninfected individuals, respectively [Reference Santin, Muñoz and Rigau16]. Another study from Taiwan suggested that people living with HIV infection had a significantly lower response to IGRAs compared to those without HIV infection [Reference Lin10]. Therefore, the prevalence of TB infection might be underestimated in our study due to decreased testing sensitivity caused by immune deficiency.

However, we did not observe a statistically significant influence of CD4 cell counts on either QFT category or quantitative results in our study population. The relatively small sample size might limit the power of the study to find a moderate difference. Moreover, as most of our study participants had started ART, their current CD4 cell counts could not retrospectively represent their immune level. As TB infection testing using IGRA alone in HIV-infected persons might miss a number of co-infections, those false negatives could not benefit from completion of treatment. Therefore, regularly intensified case-finding based on symptom investigation, bacteriology, chest DR or Xpert MTB/RIF as recommended by the WHO are also necessary for this high-risk population [17]. Furthermore, as ART not only contributes to control HIV transmission but also prevents active TB development from latent infection [Reference Suthar18], early ART might help to avoid immune deficiency-induced lower sensitivity of IGRA. The prevalence of TB infection has not been studied by IGRA in HIV-positive MSM in China previously, and although our results need further verification with a larger sample size, they provide a primary reference for further strategic study on latent TB infection management in HIV-infected populations.

This study was reviewed and approved by the Ethics Committee of the Institute of Pathogen Biology (Chinese Academy of Medical Sciences & Peking Union Medical College). Written informed consent was obtained from each study participant before the interview and testing. The questionnaire and sample collecting were performed in accordance with approved guidelines.

The authors thank the individuals from Xi'an Tong Kang Volunteers Workstation for their participation in the study. This work was supported by the Program for New Century Excellent Talents in University (NCET-01-0288).