We investigated the first cluster of pandemic influenza H1N1 2009 reported in Brazil in May 2009. The index case-patient had travelled from the USA and had contact with 11 relatives before she presented with symptoms. We conducted face-to-face or telephone interviews with the index case-patient and all suspect cases. We found evidence of pre-symptomatic transmission of the virus to four of her contacts. This finding has public health implications because it indicates that viral transmission in communities may not be prevented solely by isolating symptomatic case-patients.

Influenza viruses are highly transmissible during the symptomatic phase of illness. However, our understanding of pre-symptomatic transmission derives from animal studies, vaccine and antiviral drug efficacy studies, household cohort studies and experimental studies with influenza viruses in humans [Reference Patrozou and Mermel1]. In a review of experimental influenza infection of healthy volunteers, viral shedding preceded symptomatic illness by 1 day [Reference Carrat2]. Yet few epidemiological studies have reported transmission of influenza in the absence of symptoms. During the 2009 influenza pandemic, one study reported pre-symptomatic shedding and one reported finding none [Reference Gu3, Reference Hermes4]. Understanding the likelihood of pre-symptomatic shedding is essential for designing better prevention measures.

On 5 May 2009, the Brazilian Ministry of Health confirmed the country's first case of pandemic influenza H1N1 2009 infection [(H1N1)pdm09], in a traveller returning from the USA. On 30 May 2009, the Health Department of Santa Catarina state reported a family cluster of probable (H1N1)pdm09 in the city of Florianopolis, southern Brazil. This was the first report of a pandemic influenza infection cluster in Brazil; all previous 31 confirmed pandemic influenza cases had been in travellers from countries with confirmed circulation of (H1N1)pdm09. We conducted a field investigation of this first cluster of (H1N1) pdm09 cases in Brazil and report evidence of pre-symptomatic transmission.

In 2009, the Brazilian National Surveillance System defined a suspect case of (H1N1)pdm09 as an individual presenting with fever and sore throat or cough [influenza-like illness (ILI)] with no other diagnosis who had returned from a country with confirmed circulation of (H1N1)pdm09 in the preceding 10 days, or was a close contact of such a traveller. A confirmed case was defined as a suspected case with detection of 2009 H1N1 virus RNA by real-time reverse transcriptase–polymerase chain reaction (rRT–PCR) [5]. We conducted face-to-face or telephone interviews with the index case-patient and all suspected and confirmed case-patients in the cluster, using a standard questionnaire to collect data on patient demographics, clinical course of illness, patient behaviour, and history of patient contacts. All suspected cases were tested by rRT–PCR for (H1N1)pdm09.

The index case-patient, a 24-year-old woman, arrived in Brazil from Atlanta, USA, on 22 May while asymptomatic. She had travelled to the USA accompanying her boyfriend on a business trip; she reported no contact with anyone sick, spent most of her time in the hotel, had dinner with an American family on 19 May and recalled attending two crowded places: the mall and the airport. On 23 May, the index case-patient had lunch with her uncle, aunt and a 3-year-old female cousin, who were well. She reported close and prolonged contact, including kisses and hugs with her cousin. Later that day she went to work in her job as a cashier in a cosmetic store with seven other employees. That night she reported visiting her father and stepmother and talking to them for 30 min in front of a friend's house. She reported kissing her father and having to talk loudly and forcefully to overcome noise from a party in the house. Later that night she slept in her own house, sharing a bed with her mother; no one else stayed at the house. On 24 May she had lunch with nine relatives, including her mother, uncle, aunt and the 3-year-old cousin she met the day before, her boyfriend, grandparents and her aunt's parents. She reported close contact with her cousin during lunch, after which she left to work once again. She developed acute onset of fever, cough, myalgia, chills, arthralgia and diarrhoea after work and was hospitalized that evening. The index case-patient met the criteria for a suspect case and provided specimens that tested positive for (H1N1)pdm09 on 28 May. She remained isolated in the hospital until she recovered and was discharged; no family members had contact with the index case-patient after she developed symptoms on the evening of 24 May and during her stay in the hospital.

After laboratory confirmation of (H1N1)pdm09, her contacts were traced. No co-workers in the store where she worked developed symptoms and none were tested. Her father and stepmother presented mild symptoms of cough and rhinorrhoea on 25 May and although they did not fulfil the suspected case definition because of lack of fever, samples were collected on 28 May that tested positive for (H1N1) pdm09 on 30 May. Of the other nine relatives she had contact with on 24 May before becoming ill, her mother reported onset of cough and rhinorrhoea on 27 May and her 3-year-old cousin reported onset of cough, malaise and rhinorrhoea on 28 May, and the uncle reported rhinorrhoea on 30 May; the remaining six relatives remained asymptomatic. All relatives had specimens collected on 1 June and three tested positive on 4 June: the index-case's mother, 3-year-old cousin and uncle (Fig. 1). The latter was the father of the 3-year-old child and he had been in close contact with his daughter before and after she presented symptoms. Only the index case-patient received oseltamivir. All case-patients recovered without complications. 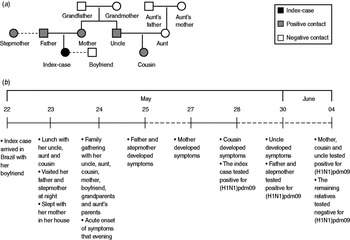 We do not have full sequence data for the virus; however, it is highly unlikely that the other cases in the household, especially those of the father and stepmother, were coincidental to the index case-patient's infection. The cluster occurred in the early phases of the pandemic in Brazil when no community circulation of (H1N1)pdm09 had been detected and the index case-patient was only the second case reported in the state of Santa Catarina. Furthermore, none of the relatives had any history of recent international travel.

To our knowledge this is only the third study that has documented pre-symptomatic transmission of influenza. One report of seasonal influenza transmission documented transmission among 16 of a group of 26 workers who were bagging fertilizer for 8 h; they developed ILI within 48 h after the activity. The probable index case-patient reported ILI symptoms within 6 h after the completion of work and although he reported no respiratory symptoms at the time of the activity, he had already felt unwell while working. Influenza virus was detected from two symptomatic co-workers; nevertheless, it is not clear if influenza virus was detected from the index case-patient [Reference Sheat6]. A second report of (H1N1)pdm09 pre-symptomatic transmission found three clusters among high-school students in the early phases of the pandemic in Japan, who were asymptomatic during the period of probable transmission [Reference Gu3].

In a mathematical model to evaluate the impact of public health control measures, Fraser et al. [Reference Fraser7] used a parameter, designated theta, which represented the proportion of transmission occurring prior to symptom onset. They estimated this to be 30–50% in pandemic influenza and concluded that these results indicated that public health interventions for influenza control may only be partially effective as the isolation of cases based on the presence of symptoms alone and any subsequent contact tracing would not be able to capture all the secondary cases that may be incubating the virus, and therefore not be able to completely limit its spread in the community. In this single investigation of a cluster of (H1N1)pdm09, we found that the proportion of pre-symptomatic transmission was 100%, since all the secondary cases appeared to arise from contacts with the index case-patient before she developed overt symptoms, after which she was isolated with no further contact being possible with susceptible individuals. In summary, this report highlights the value of carefully documented contact tracing in outbreak investigations of novel agents, thereby supplying valuable data for modelling the effectiveness of various public health interventions.

The authors thank the Health Secretariat of Florianopolis for support in this field investigation.

* Views captured on Cambridge Core between September 2016 - 5th March 2021. This data will be updated every 24 hours.