Outbreak of leptospirosis during a scout camp in the Luxembourg Belgian province, Belgium, summer 2012

An outbreak of leptospirosis occurred in the South of Belgium, during August 2012, in teenagers who participated in two consecutive adventure scout camps near the Semois river. Among the symptomatic patient population (ten scouts), clinical manifestations included headache (70%), myalgia (50%), fever (50%), bilateral conjunctival injection (50%), general malaise (30%), vomiting (20%), anorexia (20%) and cough (20%). Some of the cases presented elevated blood creatinine (40%), or proteinuria (30%). Three patients were confirmed by serology and one by polymerase chain reaction. Potential risk factors included direct contact with a muskrat and indirect contact with potentially contaminated environments including the river water. Prospective environmental investigation carried out near the river banks 2 weeks after the outbreak identified Ondatra zibethicus (muskrat) as one Leptospira sp. reservoir.

Leptospirosis is a pandemic zoonosis largely distributed in tropical areas, where warm climate conditions are favourable for Leptospira sp. maintenance in the environment. Feral and domestic animals can be directly affected by specific serovars, but simultaneously functioning as life-long reservoirs for other pathogenic serovars. Humans contract the disease by direct or indirect contact with infected urine of reservoir animals [Reference Levett1, Reference Bharti2]. Because leptospires can survive for long periods in the environment, notably through biofilm formation [Reference Barragan3], abraded skin or mucous membranes may serve as port of entry for dissemination in the body [Reference Levett1]. Humans are mainly accidental hosts. Clinical manifestations span from subclinical or mild to severe symptoms, the latter associated with high mortality rate [Reference Levett1].

Rarely, and in high disease transmission settings, humans might develop into carrier state [Reference Ganoza4]. Recreational water activities and flooding have been described as the main source of infection in various case reports [Reference Cann5, Reference Monahan, Miller and Nally6]. In Europe, sporadic cases associated with outdoor activities (prolonged exposure to contaminated water) have been described [7]. We report upon an outbreak of human leptospirosis in Belgium in scouts attending a summer camp along the banks of the Semois river and the subsequent environmental investigations of one wildlife rodent population residing alongside the river.

The cases. On 17 August 2012, within an interval of a few hours, three boy scouts presented to the emergency department 7 days after returning from a scout camp (1–10 August 2012) on the banks of the Semois river in the Belgian Ardennes. Scout no. 1, aged 13 years, presented generally ill with clinical signs of viral meningitis associated with myalgia, anorexia and headache, and complained of irritated eyes and a painful throat with a dry cough. Clinical examination revealed bilateral conjunctivitis, neck stiffness, photophobia, pharyngitis and fever. A lumbar puncture indicated lymphocytic meningitis (predominance of 72% lymphocytes) with elevated protein concentration. Blood analyses revealed slightly increased creatinine and C-reactive protein (CRP) levels (Table 1). Common causes of viral meningitis were excluded (Table 1) as were Borrelia burgdorferi, Mycoplasma pneumoniae and West Nile virus infection because of a recent holiday in Tuscany, Italy after the scout camp. Scout no. 2, aged 14 years, presented with diffuse myalgia, general malaise, rhinitis, nausea and vomiting, meningism, vertigo and high fever. This boy was critically ill with epigastralgia, bronchitis and bilateral conjunctival injection. Due to his rapidly decreasing renal function (with rising proteinuria) and thrombocyte count, the patient was hospitalized for intravenous (i.v.) hydration and treatment with antipyretics. Scout no. 3, aged 12 years, presented at the emergency department with a general malaise, myalgia, fever, cough, bilateral conjunctivitis, painful palpation of the hepatic border, sinus bradycardia (pulse rate 40/min) and oliguria for which he was hospitalized in the intensive care unit (ICU). His serum creatinine value was highly elevated, and he had nephritic urine sediment with leucocyturia. As for scout nos. 1 and 2, scout 3′s CRP was slightly elevated. Furthermore, blood examination showed impaired hepatic and renal function, low potassium level and thrombocytopenia (Table 1). Transthoracic echocardiography and radiography were normal; electrocardiogram showed a first-grade atrioventricular block, a benign and subclinical cardiac rhythm disorder. When he was discharged from the ICU, his sinus rhythm reached a pulse rate of 50/min, which lasted the following days up to the next medical consultation. In all three cases, an extensive serological work-up was done including cytomegalovirus, Epstein–Barr virus, herpes simplex virus, picornaviruses, adenoviruses, arboviruses, hantaviruses (serology for several types; PCR hantavirus types Seoul and Puumala), measles, mumps, Mycoplasma pneumonia, Borrelia burgdorferi, Toxoplasma gondii, Babesia sp., Anaplasma sp., Ehrlichia sp., Rickettsia typhi and R. conori, Coxiella burnetii, and Leptospira sp. Schistocytes were absent and atypical haemolytic uraemic syndrome was therefore excluded. Malaria infection was also excluded for the first boy. Rat bite fever was included in the differential diagnosis; however, all bacterial cultures (at least two pairs of blood cultures per patient, urine, sputum, and faeces) remained negative. Leptospirosis serology was performed by microscopic agglutination test (MAT) with a threshold dilution of 1/50 using whole-cell leptospires belonging to ten distinct serogroups. The presence of immunoglobulin M (IgM) was analysed by an immunochromatographic assay (Core Diagnostics, UK). Scout no. 3 showed antibodies and scout no. 1 showed a fourfold increase of antibodies against serogroups Canicola, and Icterohaemorrhagiae, the latter with the highest titres (Table 2a ). Sera from all three patients reacted with the IgM assay. Serum from scout no. 2 showed a borderline IgM reaction, but the MAT did not reveal antibodies in a follow-up sample taken 17 days later. Leptospira sp. real-time PCR (rtPCR) detecting the lipL32 gene [Reference Levett8] tested positive for scout no. 2 only. All three patients were treated with a combination of doxycycline 2 × 100 mg/d p.o., ceftriaxone 1 × 2 g/d i.v. (both continued for 1 week) and ampicillin i.v. during the first 48 h. They all completely recovered within 72 h after treatment. 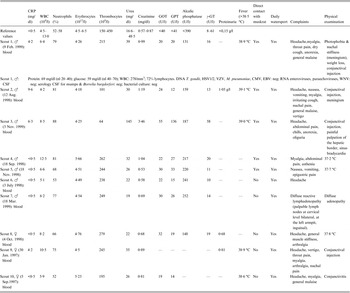 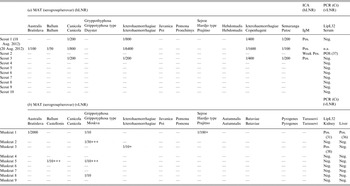 In a retrospective anamnesis, the three patients and two additional boys mentioned direct contact with a muskrat (Ondatra zibethicus) while moving a dead animal into one of the tents in an attempt to scare the other group members. Supplementary information revealed daily water sports and water recreation in the Semois river for all 34 participants of the scout camp except for the two leaders.

Within the following 2 weeks, 24 other scouts aged between 12 and 15 years who stayed at the same camp (from 1 to 20 August, 63 participants) presented individually at the paediatrics emergency department. Three of them (scout nos. 8, 9, 10 in Table 1) had comparable flu-like symptoms with headache, elevated temperature, myalgia and a sore throat. A degree of pathological proteinuria was observed in scout nos. 8 and 9, as previously noted in scout 2. Scouts nos. 8–10 were additionally diagnosed with conjunctivitis. They were specifically interviewed for possible contact with river water and confirmed daily swimming and recreational activities in the Semois river.

Out of a group of 24 children with clinical symptoms, seven (Table 1) received antibiotic therapy (100 mg doxycycline b.i.d. for 5 days) based on the severity of the symptoms. The remaining 17 children had mild symptomatic manifestations without fever which never became worse. They were followed-up regularly but did not receive antibacterial treatment. In those patients, leptospirosis was excluded on clinical and/or laboratory grounds. No anti-Leptospira IgM nor IgG antibodies were detected in the serum from patient nos. 4–10 and five additional asymptomatic scouts, and specific rtPCR was negative in the serum samples from patient nos. 4–10 (Table 2).

Prospective investigations were focused on seeking the environmental source of the outbreak. Following field and cartographic examinations of the stream network in the camp area, five locations were indicated for water collection, two of which having moving water (up- and downstream the Semois river adjacent to the scout camp area) and three having stagnant water. During seven consecutive days at the beginning of September 2012, 50-ml to 2-l water samples were collected from each point, treated as previously described [Reference Vein9] and examined with the lipL32-based diagnostic rtPCR. All samples tested negative, possibly due to the low sensitivity of the rtPCR. In addition, nine muskrats were trapped from three nests in the close vicinity of the camp site, muskrat being a highly prevalent rodent species in this area. Because the animals were collected early in the morning following the night trap, fresh blood could not be collected and pleural fluid was collected instead and used for MAT analysis with a threshold dilution of 1/10 (Table 2b ). The assay cut-off was lowered compared to standard analysis to assess chronic carriage of Leptospira, which is often associated with negative or low MAT titres [10]. Five out of nine muskrats (56%) had antibodies against Leptospira serogroups Australis, Ballum, Grippotyphosa, Sejroe and Icterohaemorrhagiae. Kidney and liver tissue dissected from muskrat nos. 1 and 3 also tested positive by lipL32 rtPCR. While an epidemiological link with muskrats has been suggested for the three laboratory-confirmed leptospirosis cases (scout nos. 1–3) with history of exposure to a dead muskrat, it was not possible to trace the infectious organism by genetic typing as previously described [Reference Ahmed11]. Comparison of the sequences of the fibronectin-binding protein one (lfb1) [Reference Perez and Goarant12] and the secY genes [Reference Ahmed11] in either the patient or the muskrats was not possible even after two successive amplification runs.

In conclusion, an outbreak of human leptospirosis occurred in a scout camp in southern Belgium with mild to severe clinical presentations. Laboratory analyses confirmed the diagnosis in the three most affected patients. The presence of pathogenic Leptospira DNA was demonstrated in the serum of one patient but seroconversion to IgG antibodies could not be demonstrated in a follow-up sample. This phenomenon is reminiscent of previously reported cases of patients with spirochaetal infection receiving prompt antibacterial treatment [Reference Marangoni13]. Although direct contact with muskrats and the finding of infected animals in close vicinity of the camp area suggest that muskrats may be the reservoir of this leptospirosis outbreak, other rodent populations inhabiting the area, i.e. rats (Rattus norvegicus) or the common vole (Microtus arvalis) could be the actual source of the outbreak through indirect exposure to their urine in the environment. No culture- or DNA-based association could be demonstrated between human and wildlife samples. The role of muskrats as a wildlife reservoir in this outbreak therefore requires further confirmation. This study emphasizes the need to improve current performance of isolation methods or to develop more sensitive molecular methods to directly obtain DNA fingerprints of pathogenic Leptospira in clinical samples. It also highlights the importance of monitoring wild rodents as carriers of Leptospira sp. as preventive public health measure.

The authors thank Raïssa Bakinahe, Philippe Vannoorenberghe, Damien Desqueper, and the laboratory staff of Bacterial Diseases in Livestock unit of CODA-CERVA, Brussels, for their valuable technical support in Leptospira investigations. Thanks are also due to Ir. Stephan Adant, Mr Benoit Leuris, and Dr Carole Schirvel for organizing and/or performing the trapping of the muskrats.

Outbreak of leptospirosis during a scout camp in the Luxembourg Belgian province, Belgium, summer 2012
×

Outbreak of leptospirosis during a scout camp in the Luxembourg Belgian province, Belgium, summer 2012
×

Outbreak of leptospirosis during a scout camp in the Luxembourg Belgian province, Belgium, summer 2012
×
×