This study compared the fatty-acid profiles of Brucella canis blood culture isolates obtained from infected dogs in the UK, Germany, Japan, South Africa, Peru, Mexico, Colombia, and Argentina, and from a human clinical case in Argentina, to a bank of isolates obtained from canine outbreaks in the USA. Analysis of a total of 42 B. canis isolates and one reference strain found a marked variation within the species. Fatty-acid analysis showed that only the isolates from Argentina, Colombia, and Mexico, which included the human B. canis isolate, contained a specific fatty acid, 19:0 cyclopropane (lactobacillic acid), w8c (cis-11,12-methylene octadecanoic acid), and that this fatty acid, when present, made up a large percentage of overall fatty-acid content. Prior to this study, the cellular fatty-acid 19:0 cyclopropane had been identified in all of the species of Brucella considered to be pathogenic to humans (B. abortus, B. melitensis, B. suis) except for B. canis. Discovering that this fatty acid not only occurs in B. canis, but also that it is only present in some strains of the species provides a new focus for investigations aimed at identifying the cause of reported geographical variability in human B. canis infection, and at finding predictors of biological behaviour and human pathogenicity within this Brucella species.

In the 1980s chromatographic analysis of cellular fatty acids was a popular technique used to speciate bacteria, including members of the genus Brucella. This tool has largely been replaced by molecular techniques that more effectively discriminate species within a given genus. However, a diagnostic need to differentiate isolates of B. canis within outbreaks of disease has developed, and fatty-acid analysis has been investigated as a promising tool for this new purpose [1]. B. canis outbreaks in large and small US dog-breeding facilities have resulted in thousands of blood culture-positive dogs and thus significant potential human exposure, yet reports of human B. canis infection are extremely rare in the USA. In contrast, serological studies and clinical case reports from Argentina and Mexico [2–4] suggest that human seroconversion and clinical infection with B. canis occur with greater frequency in these countries. Further, these reports do not describe human contact with large outbreaks in canine breeding facilities, as is known to occur in the USA, but instead record minimal or no known exposure to dogs. Given the apparent geographical discrepancy in human B. canis seroconversion and infection, we hypothesized that host and bacterial factors may be more significant than contact with infected dogs in the development of human B. canis infection. In a first step towards investigating this hypothesis, we acquired a wide geographical range of B. canis isolates, obtained from eight countries on five continents, for comparison to those in our bank of US canine isolates, using fatty-acid profiling (Table 1).

Genomic homogeneity within the genus Brucella makes speciation challenging [5–7], and clear discrimination of all isolates in this study as B. canis was necessary prior to analysing samples for differences in fatty-acid content. Therefore, we employed several molecular discrimination techniques to ensure correct speciation. A total of 41 Brucella isolates obtained from dogs in the USA, UK, Germany, Japan, South Africa, Peru, Mexico, Colombia, and Argentina, a canine reference strain, and one isolate obtained from a human clinical case in Argentina were confirmed as B. canis after initial screening using standard biochemical tests by a combination of three molecular-typing techniques. Molecular techniques included real-time PCR analysis of species-specific single-nucleotide polymorphisms (SNPs) and variable-number tandem repeat (VNTR) typing. The SNP-based real-time PCR uses a series of probe pairs labelled with alternative fluorescent dyes which correspond to two alternative states at SNP sites that define particular Brucella spp. [8]. In this multiplex assay probes defining the species B. canis reacted with all 43 samples confirming their identity. For VNTR sequencing, a 21-locus VNTR scheme that can cluster isolates according to classical taxonomic group was used [9]. Forty of the 43 samples possessed a specific profile at six relatively stable markers that we have only found associated with B. canis in studies of over 1300 Brucella isolates characterized to date, obtained from numerous species (Groussaud & Whatmore, unpublished data). The remaining three samples (isolate nos. 38, 39, 40 from Japan) all possess a second profile identical to that of the remaining 40 with the exception that one locus (VNTR14) could not be amplified from these isolates. Again, we see this particular profile only with isolates of B. canis and these data are thus consistent with the conclusion that all 43 samples represent B. canis. In addition, combinatorial PCR of 27 isolates from Argentina, Colombia, and USA (WVDL) with a B. suis strain as control also indicated that all of these isolates were B. canis (data not shown). Once rigorous discrimination confirmed that all 42 isolates and our reference strain represent B. canis, they were compared by fatty-acid analysis. The samples were subjected to gas chromatographic and dendrogram analyses of whole-cell fatty-acid methyl esters using Sherlock MIS software at the MIDI facility (Microbial ID Inc., USA) using previously published protocols [10]. Fatty-acid analysis showed that only the isolates from Argentina, Colombia, and Mexico, which included the human isolate, contained 19:0 cyclopropane, w8c (19:0 cp), and that this peak represented a high percentage of the total cellular acids, ranging between 21·83 and 41·95, in these nine isolates (Table 1). The index profile used for Brucella in the chromatographic analysis includes a combination of B. melitensis, B. abortus and B. suis, and shows 19:0 cp at 50·23% of total acids (Table 2). Among the Argentinean, Colombian, and Mexican isolates, similarity indexes to this Brucella profile ranged from 0·663 to 0·806, and dendrogram analysis showed distinct clustering of these isolates (Fig. 1). Thus, the B. canis isolates obtained from Argentina, Colombia, and Mexico produce a fatty-acid profile consistent with the Brucella spp. of greatest zoonotic potential (those included in the index profile). Because the database used for our analysis does not include a B. canis index profile, the non-Argentinian, Mexican, and Colombian B. canis isolates actually matched more closely with other bacterial profiles, including Methylobacterium mesophilicum, Ochrobactrum anthropi, Sphingomonas paucimobilis (Pseudomonas paucimobilis), Methylobacterium fujisawaense, and Roseomonas genomospecies 5, with similarity indexes to a given species in the range of 0·395 to 0·740. Figure 2(a, b) shows key profile and chromatographic differences between these isolate groupings. The difference in similarity indices reflects the critical presence or absence of 19:0 cp found in the isolates, and highlights the strong similarity that those from Argentina, Colombia and Mexico have with more pathogenic Brucella spp. 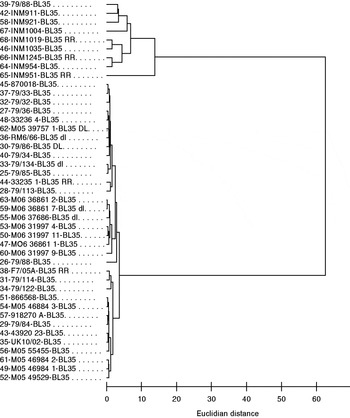 Fig. 1. Complete dendrogram derived from the cellular fatty-acid profiles of 42 B. canis isolates and the B. canis reference strain RM6/66. 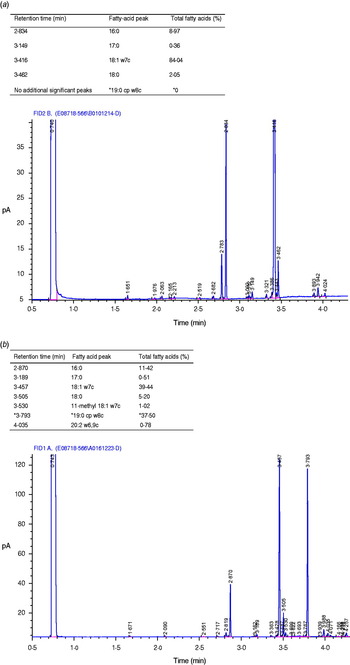 Fig. 2 [colour online]. (a) Features of non-Argentinean, Colombian or Mexican isolates showing a typical US B. canis profile and corresponding chromatograph (isolate nos. 10–43). (b) Features of Argentinean, Colombian and Mexican isolates (isolate nos. 1–9) showing a B. canis isolate profile from Argentina and corresponding chromatograph. 19:0 is indicated by an asterisk (*).

Table 2. Brucella melitensis, B. suis and B. abortus index profile

Brucella spp. lack most functional gene sequences encoding for known virulence factors [11, 12], thus a critical component of Brucella virulence is the lipopolysaccharide (LPS) surface antigen. Members of the genus Brucella are described as having a smooth or rough phenotype, which reflects differences in the LPS of the outer cell membrane. Virulence in humans is typically associated with the smooth phenotype, which is the naturally occurring phenotype of B. melitensis, B. suis, and B. abortus. B. canis stands out among the six classical Brucella spp. (there are now ten Brucella spp. with the recognition of B. ceti, B. pinnipedialis, B. inopinata and B. microti [13]) as the one species that naturally occurs in the rough form while retaining limited zoonotic potential.

While associations between rough vs. smooth phenotype and the full pathogenic potential of the bacteria, and the relationship between phenotype and fatty-acid content are not fully elucidated, aspects of these relationships have been described. The LPS smooth phenotype has been linked to the ability of Brucella to replicate in host cells [14], it has been suggested that the heterogeneity of the lipid A domain on Brucella LPS may primarily depend on fatty-acid substitutions [15], and the LPS of smooth brucellae have been shown to contain lipid A and an O-polysaccharide, while the rough species investigated had only the lipid A-core oligosaccharide [16]. These findings suggest that significant variations in fatty-acid content are likely to alter virulence. Prior to this study, 19:0 cp had been identified in all of the species of Brucella considered to be pathogenic to humans (B. abortus, B. melitensis, B. suis) with the exception of B. canis. When B. ovis, a naturally occurring rough species that is not pathogenic to humans and B. abortus were compared, 19:0 cp was found in both, but in higher concentrations in B. abortus [17]. In another study by Dees et al. isolates defined as either B. canis or B. suis were compared, and a percentage of 19:0 cp (range 35–50%) similar to that found our study in Argentinean, Colombian and Mexican B. canis isolates (range 21·83–41·95%), was interpreted as indicative of ‘rough mutants of B. suis’, where the percentage of total cellular acids was reported at 35–50% [18]. This earlier conclusion appears to be a different interpretation of similar results to those we have presented, and highlights the difficulty in correctly speciating Brucella prior to the development of the types of molecular techniques employed in our study. Until now, fatty-acid composition has not been scrutinized in a large number of B. canis isolates speciated using methods beyond classical biochemical and morphological techniques and our findings contradict the previous conclusion that fatty-acid content as high as 41·95% 19:0 cp excludes isolates as B. canis.

Detailed epidemiological data, not available for many of the isolates used in this study, is needed to better understand if there is increased zoonotic potential in the 19:0 cp variants of B. canis. Close examination of the US outbreaks from which 19 of the 19:0 negative isolates (Table 1, isolate nos. 10–28) used in this study were obtained has indicated no clinical human infections in spite of close contact with infected dogs and their secretions. As mentioned previously, human blood culture-positive infections with canine Brucella are extremely rare, but the Argentinean isolate no. 5 (Table 1) was obtained from a human clinical case of canine brucellosis. In this case the patient left the hospital before the typing of the strain was completed and no further epidemiological data could be obtained. Isolate no. 1 (Table 1), also from Argentina, was recovered from a dog epidemiologically linked with the seroconversion of its owners. A paucity of isolates available for study from true human infections, and scant epidemiological data on human cases has significantly limited investigation into human B. canis infection. However, the historical reports, serological data, and isolate data we present in this study, and the important difference we have found between fatty-acid content within isolates of B. canis suggest that B. canis isolates from Mexico, Colombia and Argentina should be further scrutinized. Future investigations will be aimed at determining if isolate variability in fatty-acid content is epidemiologically linked to human B. canis infection.

We gratefully acknowledge the assistance of Simon Brew in facilitating this work and the technical assistance of Stephen Shankster. We are also grateful to Sandra M. Ayala from ANLIS and Dr C. G. Malbrán for helpful assistance in laboratory techniques. Brucella research at the Animal Health & Veterinary Laboratories Agency is supported by the UK Department of Environment, Food and Rural Affairs (Defra). University of Wisconsin Brucella research was supported by the Wisconsin Veterinary Diagnostic Laboratory.