In 2013, an unusual increase of paratyphoid fever cases in travellers returning from Cambodia was reported in Japan. From December 2012 to September 2013, 18 cases of Salmonella Paratyphi A infection were identified. Microbiological analyses revealed that most isolates had the same clonal identity, although the epidemiological link between these cases remains unclear. It was inferred that the outbreak was caused by a common and persistent source in Cambodia that was likely to have continued during 2014. The information of surveillance and laboratory data from cases arising in travellers from countries with limited surveillance systems should be timely shared with the country of origin.

Paratyphoid fever, a systemic infection caused by Salmonella enterica subsp. enterica serovars Paratyphi (S. Paratyphi) A, B and C, is transmitted through contaminated food or water and remains endemic in countries or areas with low hygiene standards and/or suboptimal water-treatment facilities. In industrialized countries where public sanitation is presumed to be improved, most reported paratyphoid fever infections have been attributed to come from in endemic countries [1]. At present, there are no licensed vaccines against S. Paratyphi A infection [2]. Under the Infectious Diseases Control Law in Japan, paratyphoid fever is a notifiable category III infectious disease [3]; therefore, physicians are obliged to notify the prefectural governor of active S. Paratyphi A infections and asymptomatic carriers. However, those of S. Paratyphi B or C are excluded. Approximately 20–30 paratyphoid cases per year had been reported in Japan from 2005 to 2012. During this period, 169 (88·5%) of 191 paratyphoid cases had a history of overseas travel before disease onset; therefore, these infections were strongly suspected as imported. In this study, we assessed notified paratyphoid fever cases in Japan from 2009 to 2014 and discovered an increase in the number of patients with a history of travel to Cambodia in 2013.

In 2013, 49 paratyphoid fever cases were reported to the National Epidemiological Surveillance of Infectious Diseases in Japan. Of these cases, a history of overseas travel was noted in 47 cases, indicating a considerable increase in imported cases compared to those in previous years (Fig. 1). Although 70 of 85 imported cases originated from the Indian subcontinent (primarily India and Bangladesh) during 2009–2012, the number of cases imported from Cambodia increased, particularly since March 2013 (Fig. 2). A total of 18 paratyphoid fever cases of suspected Cambodian origin were identified from December 2012 to September 2013, with a peak in May (n = 5) (Fig. 2). All 18 patients (10 males, 8 females, median age 42 years, range 23–76 years) presented with high fever, five (27·8%) with relative bradycardia, five (27·8%) with diarrhoea, four (22·2%) with constipation, three (16·7%) with splenomegaly and one (5·6%) with rose spots. Furthermore, one (5·6%) had impaired consciousness at the time of notification, but his prognosis was unknown. Phnom Penh or Siem Reap in Cambodia were often reported as the travel destination of the patients; however, specific information regarding their itinerary, including accommodation and meals, were not available from the surveillance reporting form. Therefore, no clear epidemiological link was identified in these cases reported in 2013. Then, in 2014, although the total of reported paratyphoid cases dropped markedly (Fig. 1), there were still six paratyphoid fever cases returning from Cambodia (Fig. 2). 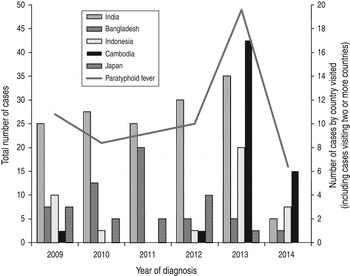 Fig. 1. Number of paratyphoid fever cases in Japan by year and country visited, 2009–2014. Only the top four countries visited by cases from 2009 to 2014 and Japan are shown. Multiple destinations of one patient were accounted for every country visited. There was some overlap in the number of cases by country visited. 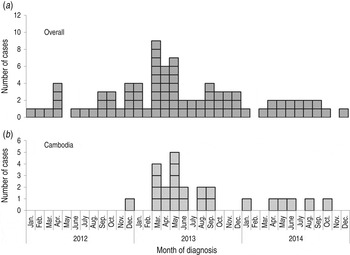 Fig. 2. Number of imported paratyphoid fever cases by month of diagnosis, 2012–2014. (a) Overall imported cases, (b) visitors to Cambodia only.

S. Paratyphi A was isolated from all 24 cases with a travel history to Cambodia during 2012–2014; samples were isolated from the blood (n = 21), stool (n = 2) and urine (n = 1). Of the 24 isolates, 22 were collected from the local public health centres that reported the cases to the National Institute of Infectious Diseases. Phage-typing was performed using an international set of phages. The minimum inhibitory concentrations of 15 antimicrobials were determined using the the broth microdilution method for all isolates [4]. The antimicrobials included ampicillin, cefotaxime, ceftriaxone, imipenem, aztreonam, kanamycin, gentamicin, tetracycline, fosfomycin, chloramphenicol, nalidixic acid, norfloxacin, ofloxacin, ciprofloxacin and trimethoprim–sulfamethoxazole. The results were interpreted according to Clinical and Laboratory Standards Institute criteria [5]. To examine clonality of the isolates, pulsed-field gel electrophoresis (PFGE) of chromosomal DNA digested with XbaI was performed as described previously using S. enterica serovar Braenderup H9812 as the standard strain [6]. Of the 22 isolates, 18 (81·8%) were phage type (PT)2 and three (13·6%) were PT1. One isolate failed to react against any phage and was, therefore, deemed untypable. Four (18·2%) isolates (two PT1, two PT2) were resistant to nalidixic acid. The other 18 isolates were susceptible to all antibiotics. According to PFGE analysis, four patterns were identified. Each pattern was similar to one another, with a few band differences. Of the 22 isolates, 18 (81·8%) had an identical PFGE pattern (Fig. 3). Although minor variations were found in PFGE patterns, the overall picture showed a high degree of genetic similarity in all the 22 isolates. 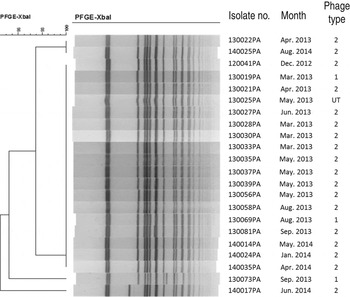 Fig. 3. Pulsed-field gel electrophoresis (PFGE) profiles of S. Paratyphi A isolates (n = 22) from patients with a travel history to Cambodia, 2012–2014. PFGE analysis was performed by chromosomal DNA digestion with XbaI. The isolate number, month (and year) of isolation, and phage type are indicated adjacent to each PFGE–XbaI pattern. UT, Untypable.

In France and other European countries, unusual increases in cases of S. Paratyphi A infection in travellers returning from Cambodia were reported from January to September 2013 [7]. Furthermore, Vlieghe et al. reported a remarkable increase in S. Paratyphi A infections in a hospital in Phnom Penh, Cambodia [8], and this was concurrent with the reported increase in S. Paratyphi A infections in Japanese travellers to Cambodia. Moreover, this increase could not be explained solely by the 15·4% increases in the number of Japanese travellers to the country in 2013 (i.e. 206 932 visitors in 2013 vs. 179 327 visitors in 2012) [9]. However, this might have been a single factor attributing to the increase of imported S. Paratyphi A cases from Cambodia to Japan. These cases may have resulted from the recent increase in S. Paratyphi A infections in Phnom Penh [7]. One of the limitations of this outbreak is the difficulty in investigating imported cases retrospectively. Most isolates obtained from Japanese travellers returning from Cambodia were classified as PT2, which was the same PT of an isolate identified in England, associated with travel to Cambodia [10]. Furthermore, most strains isolated during 2012–2013 had the same clonal identity according to their PFGE and phage-type profiles, and the outbreak may have continued during 2014.

There are several limitations of this study. First, epidemiological information that could enable us to infer a common source of infection for imported cases was unavailable. Second, the details of the destination of cases imported from Cambodia were unknown. Nevertheless, our results suggest that data on PFGE alongside antimicrobial resistance testing of imported paratyphoid fever isolates suggesting an ongoing outbreak of infection should be timely shared with the country of origin. This is particularly relevant in countries with limited surveillance capabilities, in order to facilitate an appropriate public health response. For example, antimicrobial-resistant Enterobacteriaceae carrying New Delhi metallo-β-lactamase 1 (NDM-1) was first reported in a Swedish patient returning from India [11]. Several reports of imported cases carrying NDM-1 returning from India facilitated the investigation of the prevalence of NDM-1 in India [12]. Information sharing, either nationally or internationally, may contribute to international monitoring, strengthen response to a certain infectious disease and address a global concern, such as antimicrobial resistance. This completely matches the concept of International Health Regulations 2005 and will facilitate capacity building for Cambodia, as well as for regional/international surveillance systems of travel-related infectious diseases.

We thank all the local public health centres and local public health institutes in Japan for providing the isolates. This work was supported by JSPS KAKENHI grant no. 34 104 500 and Health and Labour Sciences Research Grants (HLSRG), Research on Food Safety, of the Ministry of Health, Labour and Welfare, Japan.