Asymptomatic colonisation of the gastrointestinal tract by carbapenemase-producing Enterobacteriaceae is an important reservoir for transmission, which may precede infection. This retrospective observational case–control study was designed to identify risk factors for developing clinical infection with OXA-48-producing Klebsiella pneumoniae in rectal carriers during hospitalisation. Case patients (n = 76) had carbapenemase-producing K. pneumoniae (CPKP) infection and positive rectal culture for CPKP. Control patients (n = 174) were those with rectal colonisation with CPKP but without CPKP infection. Multivariate analysis identified the presence of a central venous catheter (OR 4·38; 95% CI 2·27–8·42; P = 0·008), the number of transfers between hospital units (OR 1·27; 95% CI (1·06–1·52); P < 0·001) and time at risk (OR 1·02 95% CI 1·01–1·03; P = 0·01) as independent risk factors for CPKP infection in rectal carriers. Awareness of these risk factors may help to identify patients at higher risk of developing CPKP infection.

The spread of antimicrobial-resistant bacteria is a major public health issue worldwide, primarily due to associated morbidity and mortality [1]. Among these microorganisms, carbapenemase-producing Enterobacteriaceae (CPE) are perhaps the most of clinical concern, since they can cause a broad spectrum of infections that are typically associated with high mortality, particularly in the acute healthcare setting. The impact of CPE in Spain is primarily due to OXA-48-producing and VIM-1-producing Klebsiella pneumoniae [2]. The proportion of patients who develop infection following CPE colonisation is influenced by host characteristics and the invasiveness of each type of CPE and although data regarding infection/colonisation ratios are limited, it has been estimated that 10–30% of colonised patients will subsequently develop CPE infection [3] The aim of the present study was to identify risk factors for carbapenemase-producing K. pneumoniae (CPKP) infection in rectal carriers of CPKP during hospitalisation.

This study was conducted at the Hospital Universitario de Canarias (Tenerife, Spain), a 687-bed public tertiary hospital serving the northern area of the islands of Tenerife and La Palma, with a population of 446 253 inhabitants. Since October 2013 our hospital has implemented a CPE surveillance programme based on recommendations by the Autonomous Community of Madrid [4]. Our institution is currently classified as an endemic area for OXA-48-producing CPE to European Society of Clinical Microbiology guidelines [5]. All patients admitted to hospital wards where CPE had previously been detected were screened by rectal cultures once a week until 2 weeks after the last patient with confirmed CPE in that ward had been discharged. In addition, rectal swabs were collected from each patient on admission to the intensive care unit and then weekly until discharge.

We conducted a retrospective, observational, case–control study, between October 2013 and December 2015 using the following patient definitions:

A range of patient clinical and demographic variables as well as antibiotic treatment were collected to verify comparability between case and control groups as outlined in Table 1. Time at risk was considered as the number of days from hospital admission to infection for case patients, and to discharge or death for controls. The source of infection was established according to the Centers for Disease Control and Prevention criteria [8]. The authors waived the need for approval of the present study by Clinical Research Ethics Committee of our hospital, given its non-interventional and retrospective design. 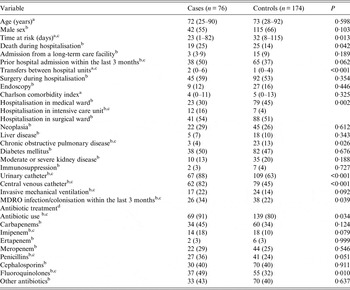 a Median (interquartile range) compared with U Mann–Whitney test.

c Variables were included in the multivariate analysis.

d Administration for more than 3 days within the last 3 months.

The characteristics of the sample are described summarising the nominal variables with the relative frequency of their component categories and scale variables with the median (P5–P95) due to their non-normal distribution shown by the Kolmogorov–Smirnov test. Simple comparisons of variables between infected and non-infected groups were made in the first case with Pearson's χ 2 test and in the second with the Mann–Whitney test. The Kaplan–Meier method was used to investigate the role of patient length of stay on the risk of infection. All factors with a significance level of P < 0·10 in simple comparisons were introduced as potential predictors of infection in binary logistic regression multivariable models to estimate their odds ratios using the full model and backward stepwise method of adjustment with Wald criterion. All tests of the study hypothesis were bilateral; differences with a P < 0·05 were considered statistically significant.

The clinical and epidemiological characteristics of the two groups are shown in Table 1. Controls had significantly longer hospital stays (time at risk), but cases were more often transferred between hospital units (P < 0·001), had prior hospital admissions within the last 3 months (P < 0·062), and resident in intensive care unit (P < 0·002). In addition, cases underwent more invasive procedures during their hospital stay, including insertion of a central venous and/or urinary catheter and mechanical ventilation. Higher rates of colonisation or infection with other multi-resistant microorganisms were observed in the case group and the use of antibiotics (penicillins and fluoroquinolones) was more frequent in cases compared with the control group. The cumulative infection risk increased progressively during the first 100 days of hospital stay, then stabilised with a risk level around 1.

This study investigated risk factors for the development of CPKP infection in patients who were initially only rectally colonised with these organisms. Previous colonisation with K. pneumoniae has often been shown to be preceded its appearance in nosocomial infection [9]. To date, no published studies have investigated risk factors for developing nosocomial infection with OXA-48-producing K. pneumoniae in rectal carriers. In our study group, the rate of CPKP infection was 30·5% in initially colonised patients which likely reflects the rate of infection in the general adult inpatient population in our tertiary hospital. As independent risk factors for infection by CPKP, multivariate analysis identified the presence of a central venous catheter, the number of transfers between hospital units and time at risk.

Invasive procedures [2, 9, 10] and medical devices commonly play a far more important role in increasing susceptibility to nosocomial infections than underlying diseases and likely provide a portal of entry or even a source of infection in previously colonised patients. Poor compliance with aseptic techniques and hand hygiene, as well as more aggressive and intensive nursing care, could facilitate the transmission of CPKP from dirty to clean surfaces [2]. As in other studies, prior insertion of a central venous catheter was associated with CPKP infection, and such procedures have been shown to be constituted an independent predictor of CPKP infection in initially colonised patients [9].

Few studies [11] have identified transfers of patients between hospital units as an independent risk factor of CPKP infection but more generally hospital-associated infections have been linked to such transfers [12]. It is therefore not surprising that this proved to be an independent risk factor for CPKP infection in this study, since patients with more transfers inevitably have more direct contact with a contaminated environment, CPE rectal carriers, health workers or hospital equipment.

Extended hospital stay is a major risk factor for CPE colonisation [11]. However, few studies have related length of hospital stay specifically with the development of CPKP infection. Here, we defined time at risk as the number of days from hospital admission to infection for case patients, and to discharge/death for controls, considering that the reservoir is unknown, thus exposure could either be direct and/or indirect. By logistic regression analysis, Vergara-Lopez et al. [13] demonstrated that time at risk was the only variable associated with infection by clonal multidrug-resistant Klebsiella oxytoca in the context of a four-wave outbreak which occurred in a Spanish intensive care unit. In our study, surprisingly, non-infected controls were significantly more likely than cases to have longer hospital stay and among infected patients, the number of transfers between hospital units outweighed the influence of hospital stay time.

French et al. [14] concluded in their review on the control of CPE that there is limited evidence to support the use of multi-component measures, but it is difficult to disaggregate the effectiveness of individual components, or which components are best used together. However, the diminution of hospital stay and the creation of a CPKP patient unit in order to reduce transfers within the hospital could help to decrease CPKP infections in our hospital, apart from emphasis on compliance with aseptic techniques in central venous catheter use.

CPE can produce a broad spectrum of infections usually in the acute healthcare setting [2]. In our study group, the most common type of CPKP infections was urinary tract infection followed by bacteraemia and surgical site infection. Likewise CPE infection is typically a late complication of hospitalisation generally occurring approximately 2–4 weeks from patient admission [15]. Our CPKP-IN cases developed infection at a median of 23 days after admission and the cumulative risk of infection increased progressively during the first 100 days of hospital stay, then stabilised with a risk level around 1.

The present study has some limitations. First, we were unable to obtain reliable information on exposures outside the study centre, so outpatient antibiotic therapy may have influenced our results. Second, because the study was limited to a single centre, these results may not necessarily be extrapolated to other hospital situations.

In conclusion, this case–control study confirmed that use of central venous catheters, number of transfers between hospital units, and time at risk are independent risk factors for CPKP infection in rectal carriers. Awareness of these risk factors would help identify which high-risk patients to target for the prevention of CPKP infection and underline the importance of implementing strict infection control measures.

No funding other than local institutional support was provided in the work reported, including involvement in preparation, submission, and review of the manuscript.